For motorists and other road users in Jos, the capital city of Plateau State, it has become a life of dodging potholes that now litter… 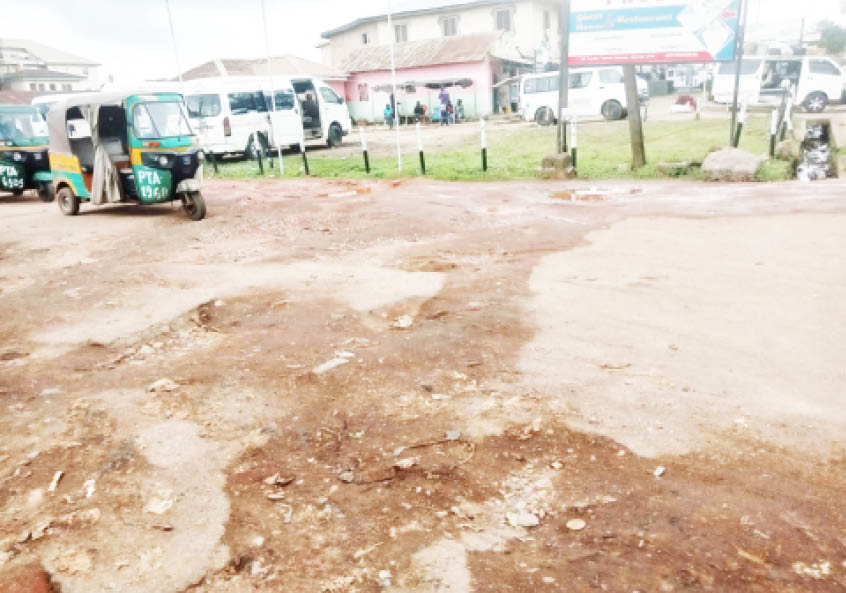 For motorists and other road users in Jos, the capital city of Plateau State, it has become a life of dodging potholes that now litter the city centre of the ancient Tin City. Daily Trust on Sunday reports the effects of the potholes on commuters and why the Federal Road Safety Corps (FRSC) thinks the situation could increase accident records in the state.

Potholes have taken over major roads in Jos metropolis, becoming a source of concern for vehicle owners, who said the cost of maintenance had suddenly surged as they had been forced to visit mechanic workshops frequently.

From Bauchi Road to Dogon Dutse, Rwang Pam Street to Beach Road, Ring road, Yan Doya and Rikkos, among others, motorists and residents said the roads had become a source of embarrassment and the cause of unwarranted gridlocks and avoidable accidents.

For some road users, the effect of the potholes could be felt on their health as they are forced to sometimes take pain killers to relieve the body pains they often experience after the day’s job.

Muhammad Buhari, a commercial tricyclist within the city and resident of Bauchi Road, said they constantly battled potholes across the city.

“I usually become exhausted after driving due to the nature of the roads. Sometimes the situation forces you to return home to rest, even before the day is over.

“Apart from the fatigue, our movement on tricycle (keke) is usually slow and there is no chance of speeding up; hence a trip that should ordinarily last 10 minutes could be delayed for 20 minutes or more,” Buhari, who said he was struggling to make ends meet, told our correspondent.

He said the many potholes on Bauchi Road, one of the highly congested places in the city with a dual carriageway, were expanding due to heavy downpours, while new ones were emerging.

Our correspondent also observed that the road leading to Masallacin Jumma’a, Bukuru Park, down to Ola Hospital, were also in need of repair as potholes have emerged at different points, making free movement almost impossible.

Daily Trust on Sunday recalls that the Plateau State Government had few years ago flagged off “Operation Zero Potholes” in Jos and Bukuru metropolis. Residents, however, decried government’s lack of consistency in the programme, which they claimed resulted in the reappearance of large potholes that have now become a source of danger to motorists and residents.

Losama Bulus, a driver who lives in Tudun Wada community, said the potholes had become a source of concern for motorists.

“If you go to Tudun Wada motor park, Polo roundabout and Beach road, there are large potholes that can cause a lot of damage to vehicles. Vehicle parts such axle, tyre, silencer, among others, often develop mechanical faults on these roads,” he said, lamenting that spare parts and vehicle maintenance have become expensive. He added, “With the condition of the roads, if you are not financially buoyant it will be difficult to cope with vehicle maintenance.”

Like Losama, Adda’u Ussaini Magaji, a motorist and resident of Anguwan Rogo, said he was considering parking his vehicle at home until the potholes are filled.

Magaji, who explained how he incurred additional expenses on his car, said it had become impossible to ply certain areas of the city comfortably, adding, “If I insist on plying certain areas, the car would most likely develop a major fault.”

Also, Abdullahi Idris, who owns a car shop in Jos metropolis said, “The many potholes on the roads cause accidents, especially when drivers try to dodge them. Apart from that, if you keep plying those roads, your vehicle would develop mechanical problems and you would patronise mechanics frequently.”

According to him, although it is the constitutional responsibility of the government to develop infrastructure, residents must play a role in maintaining them. He said there was no harm if communities would come together to refill the potholes.

Our correspondent reports that the state of the roads has also become a major concern for the FRSC as the potholes usually cause traffic gridlocks, which often result to congestion and disorderliness.

“It causes lane indiscipline, thereby leading to head-on collisions,” Peter Yakubu Longsan, the public enlightenment officer of the FRSC in Plateau State said while reacting to frustrations of motorists and the effect of potholes in the metropolis.

Longsan also said potholes could lead to road crashes, especially at night and when rainwater covers them. “If a vehicle is on speed and suddenly bumps into them, it is bound to summersault.

“Potholes could damage many parts of the vehicle, especially the tyre, which could cut or burst. It could affect the bolt joint, tie rod, driving shaft and cause damage to suspension,” he said, adding that many potholes on the roads multiply the figures of crashes and retard the corps’ vision and mission.

“They also increase man-hour losses by our men who control traffic to ensure lane discipline and orderliness on the roads. Subsequently, more men are deployed to man areas experiencing gridlock as a result of potholes, instead of using them for other duties,” he said.

Reacting to the situation, the permanent secretary in the Ministry of Works in the state, Alexander Plangnan, an engineer, said government was not oblivious of the increasing potholes in the metropolis, but it was forced to delay the work due to the rains in recent times.

He said there were efforts by the government to divert traffic from the British-America junction where a new flyover is being constructed, towards Plateau Hospital. He added that the potholes emerged as a result of increased traffic caused by heavy trucks, especially because of diversions.

“You can imagine the number of trucks that ply the roads through Jos. Most of the potholes are new.

“Repairing roads during the rainy season is not easy because the asphalt, which is the material used, is very expensive and may not burn properly due to constant rain. What we did around Plateau Hospital, down to Farin Gada, was to bring a stone base with cement to stabilise it a bit so that the depth of the potholes would be reduced. Now that we have entered September, the filling of the potholes is in our programme,” the permanent secretary said. He, however, urged motorists to bear with the government as efforts were being made to cover the potholes before the end of the month.