From late June, more farmers have planted cotton this season compared to last year. Most of them, however, planted the Bt cotton varieties, which yield… 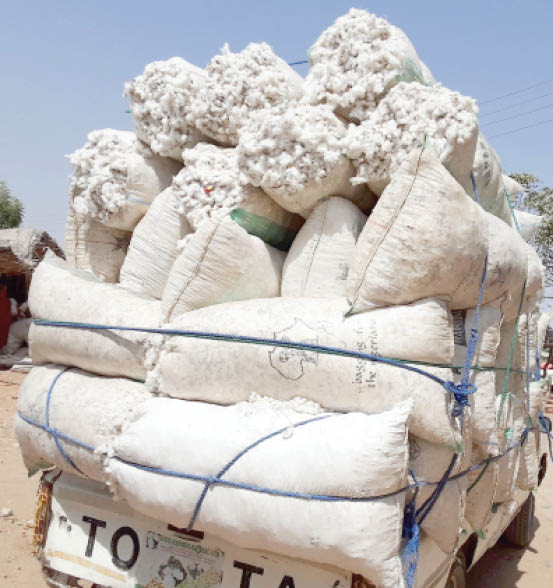 Most of them, however, planted the Bt cotton varieties, which yield more than two tons per hectare on the average as against the traditional seed that rarely yields up to 800 grams per hectare.

So, production this year has significantly increased, thanks to the price of the produce, which shot to a record high.

Since December 2021, the price of cotton per ton rose from N350 per kg (N350,000 per ton) to close to N550 per kg (N550,000 per ton) a few months ago, which saw more farmers going into production this year, according to Alhaji Danjuma Ibrahim, a cotton farmer who also trades in cotton in  Adamawa State.

Also speaking with Daily Trust on Sunday in Abuja, the National President of Cotton Association of Nigeria (NACOTAN), Mr Anibe Achimugu, said farmers under the association planted 1,849 hectares this year.

He added that they also supported other farmers with inputs to cultivate over 3,000 hectares in the 2022 planting season.

Although some farmers said the current price of N18,000 per kg of the certified seed was high, others acknowledged that the benefits outweighed the cost.

“If you utilise best agronomy practices, you will be getting nothing less than two metric tons per hectare. Compare that to the conventional seeds from which you get less than one ton.

“There is also the advantage of you spending less in terms of pest management because you won’t be utilising many chemicals to fight bollworms.

“In addition, these seeds are short-duration and drought resistant,” the NACOTAN president stated.

Achimugu, who is also the Managing Director/CEO of Arewa Cotton and Allied Products (ArewaCotton), said farmers in states in the North West, North East and North Central planted the Bt cotton because they were assured of good germination; and even with less fertiliser, growers can still get something good.

Dr Amos Phiri, who worked with farmers as extension agent in Adamawa last season, said over 300 cartons of the Bt cotton seeds have been procured by farmers’ associations and distributed to their members this season alone in the state.

This is higher than what the farmers bought last year. Each carton contains about 16kg of seeds and farmers are expected to use at least 4kg per hectare.

He said the number of farmers this year was massive in the state because prices have been good in the last two years.

For farmers under the Anchor Borrower Programme, the market is already guaranteed according to the president of NACOTAN.

The Deputy Director, National Biotechnology Development Agency (NABDA), Dr Rose Gidado, who emphasised the advantage of the seeds, said Bt cotton is extremely resistant to the pink bollworm complex, which constantly ravaged and tore cotton and prevented it from having high yield. For farmers, BT cotton is a lifesaver.

Dr Gidado, who is also the country’s coordinator, Open Forum for Biotechnology, said in Nigeria, farmers stopped growing cotton because the low yield made the industry unattractive. But this new seed has suddenly revived the cotton industry.

The textile sector will soon undergo a transformation and contribute to the nation’s GDP.

Mahyco and Shiram are the two companies marketing the seeds in the country and sources said they have provided over 100 tons for Nigerian farmers this planting season.

Meanwhile, stakeholders are worried that while farmers are gradually returning to cotton production, the textile industry is still in comatose despite the N100 billion revival funds managed by the Bank of Industry.