Mohammed Shammasu: Lewandowski, Benzema my role models for I like scoring goals 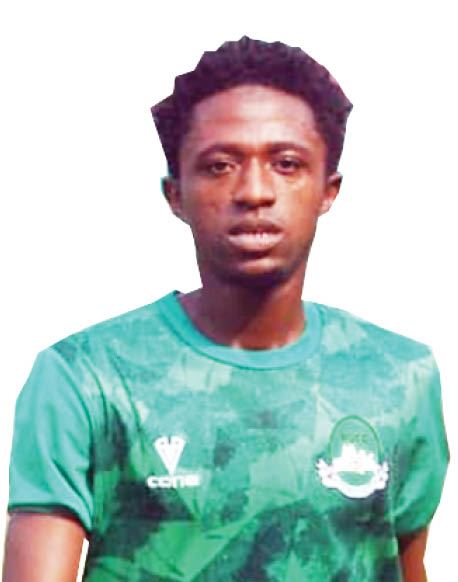 Nasarawa United youngster, Mohammed Shammasu, popularly called ‘Junior’ has said he adores and models his game after legendary strikers, Robert Lewandowski and Karim Benzema because he likes scoring goals. In this interview with Trust Sports, Shammasu who is called ‘super-sub’ by his teeming fans after he came on as substitute to score in three consecutive matches for the ‘Solid miners’ spoke on his goals, his new found fame and Super Eagles ambition.

As a substitute, you scored in three consecutive matches for Nasarawa United to earn the nick-name ‘Super sub’. How happy are you about your rising profile?

I am so happy that I have been able to justify the confidence reposed in me by the coaching crew. I want to thank God. The Nigerian Professional Football League is becoming more competitive so it is not easy to score three goals. Some strikers may end the season without a single goal. So, in all things, I give thanks to God who made it possible. I also want to acknowledge the support of my team mates, the management and technical crew of Nasarawa United. I didn’t do it alone. For us in Nasarawa United, it is always team work.

What are your thoughts whenever you sit on the bench waiting for a chance to play?

What I do is to watch attentively proceedings on the field so that I will make impact when introduced. I watch what my team mates are playing. I look at what our opponents are also playing. I try to identify their weakness that I will exploit. And more importantly, I pray to God for protection and wisdom. Interestingly, in the matches against Katsina United, Enyimba FC and Abia Warriors, I came on and made the difference. I scored the winning goals against Katsina United and Enyimba. I also scored in the 2-2 draw with Abia Warriors in Okigwe.

Some players grumble when they are consistently used as substitute. Are you comfortable starting from the bench?

I am a different player. I don’t have any problem. I cannot question the decision of my coach. He knows exactly what he wants. It is true every player wants to start matches but playing as a substitute does not make me less important in the team. Like I said earlier, it is from the bench that I usually map out my strategies against opponents. Moreover, I am still a young boy so by the grace of God, I have many years to play football.

What is your goal target for Nasarawa United this season?

I want to score at least 10 goals. I don’t want to put myself under any kind of pressure so let’s have that for now. However, with God all things are possible. I may end up scoring more goals. After all, we are still in the first round of the season. There are many more matches to be played. I know that if I continue to work hard, I will meet my target or exceed it.

Considering your age and physique, how do you cope with hard tackling defenders in the NPFL?

It is not easy but football is more of intelligence than physicality. It is good to be physical but as a football player, you must possess enough intelligence to always outwit stronger opponents. This is exactly what I do. Most times, I get kicked by rough defenders but they don’t scare me. There is no strong player that cannot be outsmarted by a clever opponent. Moreover, my coach keeps telling me that I can do it.

It appears you are Nasarawa United fans’ favourite at the moment. How are you coping with your new found fame?

They bring me close to joyful-tears. When I was about to be introduced in our home match with Sunshine Stars, the fans chanted my name and I was close to tears for their show of love and confidence in me. They believed I was going in to score. When I got into the pitch, I did everything to score but it wasn’t possible. So the fans are one of my major inspirations. They believe in me so much and I am also doing everything to make them happy. Recently, I have noticed that people discuss and point at me when I move around Lafia town.

Don’t you think the attention from the fans will become a distraction?

By the grace of God, I won’t allow anything to get into my head. I know that the moment I stop to play well or score goals, the same fans might turn against me. Having known this, I am not going to allow myself to be misled by what is happening presently. I have to stay humble and focused no matter the attention.

Out of the three goals you have scored so far, which of them is the best?

Although my first goal of the season against Katsina United was special, when I scored the match winner against Enyimba, it became my best goal for now. You know Enyimba is among the biggest clubs in Africa. So scoring against them in such circumstances was a memorable moment.

Which of Nasarawa United victories this season do you consider as the best so far?

I will still say our victory over Enyimba because it was a very difficult match. As a matter of fact when it was 1-1 with few minutes left to play, most of the disappointed fans left the stadium. However, I got the winner in the added minutes of the second half. Most of the fans couldn’t believe their ears when they heard we eventually defeated Enyimba 2-1. It was a sweet victory for us.

What would you say is your most painful defeat so far?

Without doubt, it is the 0-2 loss at Wikki Tourists. We played very well but the goals refused to come. We dominated proceedings but they kept scoring against the run of play. In the end we were beaten. Honestly, we deserved at least a point in that match.

Who is your role model?

I have two role models, Robert Lewandowski of Bayern Munichen and Karim Benzema of Real Madrid. These are proven goal scorers and I want to be like them. They like to score goals and I have the same passion for goal scoring.

What are your future plans as a professional football player?

Like any other young player, my ambition is to play for the Super Eagles. I am still below 20 years so I wish to start with the Flying Eagles from where I hope to go through the other age grade national teams to the Super Eagles.

How do you relax when you are not playing football?

I am still mummy’s boy (laughs) so when I am not on the field, I go to assist her in the shop. For me, that is the least I can do to appreciate my mother for supporting my dreams. Yes, I am a professional footballer but I am still her little boy.