Nigerians have taken to the micro-blogging platform, Twitter to express their divergent views on the heroics of Super Eagles winger, Samuel Chukwueze following Villarreal’s historic… 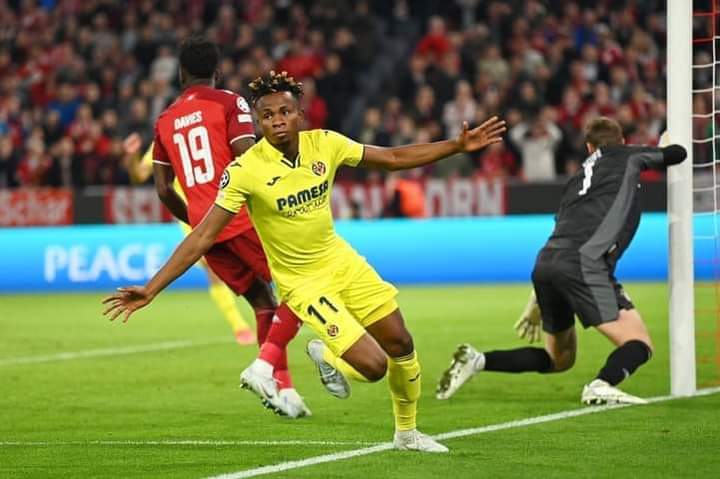 Nigerians have taken to the micro-blogging platform, Twitter to express their divergent views on the heroics of Super Eagles winger, Samuel Chukwueze following Villarreal’s historic run to the semi-finals of the UEFA Champions League at the expense of favourites Bayern Munich on Tuesday.

Chukwueze was on the pitch for just three minutes and 51 seconds when he scored the goal in the 88th to send the German giants crashing out of the competition.

Ugwunna Ejikem @UgwunnaEjikem said Chukwueze’s name should be mentioned as the Nigerian that sent Bayern packing.

“Bayern Munich might have just been knocked out of the UCL by a Nigerian man, Samuel Chukwueze. Say The Name!,”

“Samuel Chukwueze has just knocked this Bayern super team out of the CL with the biggest goal of his career. Don’t forget his name.”

Ayo Olu Ibidapo @aysugaofficial went down the memory lane when the last Nigerian player which is Mikel Obi won the competition in 2012 with Chelsea.

“The last time a Nigerian player got to the UCL semi, he went on win the cup.  Goodluck @chukwueze_8.”

Bayelsan @AntiXenophobian apparently wasn’t happy with the role Chukwueze played in the Super Eagles’ failure to clinch the Qatar ticket.

“So Samuel Chukwueze can score against Bayern to take Villarreal to the UCL semis but won’t score against Ghana to take Nigeria to the world cup group stage… Who we offend for this country?”

SANTORINI @DeKINGKUDOS praised Chukwueze for his heroics which none of the PSG stars could do.

“Chukwueze single handedly took Villareal to the Semi Final, that’s something Messi can’t do even with Mbappe and Neymar in his squad.”

“Okay but could chukwueze do it on a hot Tuesday night against Ghana??”

Meanwhile, Nigeria’s Minister of Youths and Sports Development, Sunday Dare, during the official tour of the UEFA Champions League trophy, extended his best wishes to Chukwueze as the only Nigerian left in the competition.

The minister also urged Austin Okocha to clone someone in his likeness to help solve the Super Eagles midfield woes.