Sadiq Alhaji Mala, 15, an Internally Displaced Person (IDP) dropped out of school three years ago, but has become an asset to be invested in.… 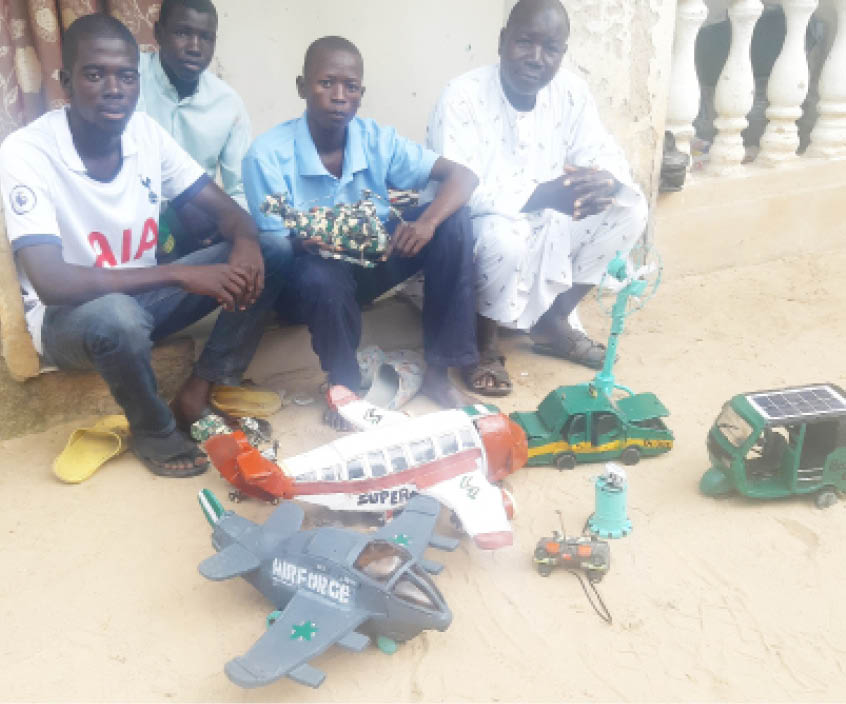 Sadiq Alhaji Mala and relations with prototypes in Maiduguri

Sadiq Alhaji Mala, 15, an Internally Displaced Person (IDP) dropped out of school three years ago, but has become an asset to be invested in. In this interview with Daily Trust on Sunday, he talks about how he designed prototypes of military jet, KeKe Napep, taxi, airplane with metal scraps.

Tell us about yourself?

My name is Sadiq Alhaji Mala, also known as Abba. I’m 15 years old and I am from Yawu ward in Abadam Local Government Area of Borno State. I am an Internally Displaced Person. I was in primary four when we came from Abadam to Maiduguri as IDPs. Boko Haram insurgents had attacked my village many times because my parents were farmers who specialise in cattle rearing.

Can you recall what happened before you left your village for the IDP camp?

One day, Boko Haram members came into our village, killing and destroying everything in sight which made us run away from our ancestral home to Maiduguri as IDPs. We initially lived with our relatives, but they are poor and cannot afford our daily meals. Rather than over burdening them, we moved to the IDP Camp in Mohammed Goni College of Legal and Islamic Studies (MOGOLIS). This happened during Kashim Shettima’s administration. They fed us and we used the classrooms as our house. I continued with my studies but things got so difficult for my mother that I had to stop going to school when I was in JSS 2. I started a business of buying and selling dates in order to have something and support my mother. Two years ago, Governor Babagana Zulum relocated us from the IDP Camp to Auno (since Abadam was not safe for us to return) because the IDP camp is a school space and the students will come back for their normal classes in the places we occupy. Now, we live in Auno village in Konduga Local Government Area but I still visit our relatives in Maiduguri.

Where did you learn the skills of inventing from?

I didn’t learn it from anyone and I have never been guided by anybody. I left school three years ago. It took me time to do some projects due to lack of equipment and materials. I always visit dump sites because that’s where I usually get metals. The only thing I know is that if I am having difficulty in fabricating any prototype, all I need to do is to sleep, and the solution would come.

How did you start this invention?

One day, I thought of creating something with metal unlike the ones we usually do with clay since I was a child. I believe this is a special talent I was born with. From my childhood, I’ve always love putting different tools, equipment and materials together. I always like to do something new; and whenever I try and it doesn’t work, when I go to sleep, I would see the solution in my dream. I fabricated small toys with metal when I was in IDP camp and give it out to children to play with it. Sometime ago, taxis and tricycles were distributed by Governor Zulum to people. I took it as a clue and decided to do something to help my society. It took me a week produce a Keke Napep that can take a human being, I tested it and it was okay.

What are the things you’ve fabricated so far?

I started with toy cars for the children; the big one is this prototype KeKe Napep with solar panel; I designed an Airforce Jet because it helps in sending Boko Haram away from us; Military motor bike; aeroplane, taxi with solar, standing fan and a remote-controlled gas cooker. I focus mostly on military equipment in order to help my state and country to overcome security challenges because the military helps us a lot. We have suffered in the hands of Boko Haram and I want this to end.

How do you source your materials?

All you see here are scrap metals. Also, I sell satchet water at Auno Checkpoint and use the money to buy materials such as gum, super glue and shoe shinner rubber. Sometimes, I ask my mother for money. I was opportune to fulfill my dream of making all these prototypes.

How many days did it take you to produce the military jet?

It took me a single day to make the military jet and when it’s connected to the battery, it moves. Most times, I have an idea of what to do but I don’t the materials.

What is your ambition in life?

I want to become an electrical engineer. I don’t know how my dream will materialise because my mother is poor, but I will continue to do the little I can do, Insha Allah I will fulfil my dreams. Years ago, I started with clay and now scrap metals. Allah knows best!

What are your challenges?

I use two days to look for scraps to start the work. I have many ideas but lack of proper education is my major challenge which can even make me lose some ideas. I left school three years ago and I have started forgetting many things I was thought in school.

I need to hone my skills and talent; I want to create jobs for people but I can’t do that except I get good education. Mother is in Auno village struggling and there is no one to support her. She wants me to go back to school because she always says that I am the only hope she has. If I get assistance from government or people, I will not disappoint them.