Eight months after, the panel set up by the Minister of Transportation, Rotimi Amaechi, to investigate alleged infractions by the suspended Managing Director of the… 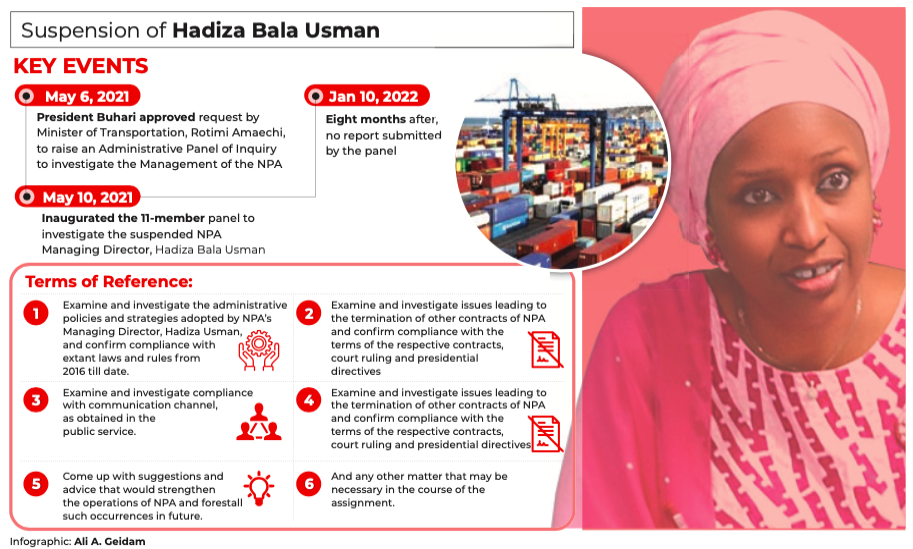 Eight months after, the panel set up by the Minister of Transportation, Rotimi Amaechi, to investigate alleged infractions by the suspended Managing Director of the Nigerian Ports Authority (NPA), Hadiza Bala Usman, is yet to submit its report, Daily Trust reports.

Hadiza was suspended in May 2021 by the federal government as part of moves to “Allow an independent audit of the accounts and remittances of the agency.”

In her place, Mohammed Bello Koko was appointed to head the agency in an acting capacity.

Some sources told the Daily Trust that they had doubts if the panel of enquiry had done something serious on the matter since it was inaugurated.

The sources within the transportation ministry indicated that the investigation might have been abandoned following media reports that the NPA Chief Executive had been sacked by President Muhammadu Buhari.

The claim had not been confirmed or denied by those responsible.

A senior staff at the transportation ministry said, “I am not aware of the report has been completed. Ordinarily, such a report, if submitted won’t be a hidden matter because some of us in the ministry will be aware.”

Another senior staff said he had serious doubts if the committee was still working.

He said, “Recall that Madam Hadiza was reportedly sacked by President Buhari; so I think that might put paid to the matter,” he said.

At the inauguration of the committee on May 10, 2021, Amaechi didn’t give the members a definite deadline to complete their tasks.

He told the 11-man committee to take its time and do a good job and provide a detailed report.

The committee is chaired by Auwalu Suleiman, who is the Director, Maritime Services at the transportation ministry.

The co-Chairman was Ben Omogo who was brought in from the Office of the Head of the Civil Service of the Federation alongside others whose names were not given at the time of inaugurating the committee.

Hadiza’s suspension eight months ago re-echoes leadership instability in the NPA and other maritime agencies considered “lucrative” by politicians.  The agency had previously witnessed the unceremonious axing of its chief executives.

Key observers believed that lack of stability at the NPA was affecting its optimum performance and also reducing huge revenue accrued to the government.

Daily Trust reports that NPA is one of the major revenue-generating agencies of the federal government considering the quantum of import and exports being carried out through international waters.

Nigeria’s seaports suffer from a cocktail of challenges ranging from inefficiency to corruption.

The shortlist of ‘pain points’ for Nigerian ports, according to a recent survey, includes the rampant exercise of discretionary power by port officials; a bouquet of payments made for services not provided; and lack of awareness by port users of grievance mechanisms available for addressing service challenges at the port facilities.

Analysts have said these challenges have led to Nigerian ports and terminals being amongst the most expensive in the world; inefficient and allegedly riddled with corruption.

The poor value propositions of Nigeria’s maritime handling facilities has resulted in individuals or group of individuals taking advantage of the poor conditions of port infrastructure, slow processing time and wide discretionary powers of officials to create caches of personal cash.

The panel of inquiry was set up by Amaechi to investigate allegations of misappropriation of funds by Hadiza Bala-Usman.

Her suspension from office followed a letter reportedly sent to President Buhari by Amaechi over the yearly remittance of operating surpluses by the NPA from 2016 to 2020, which according to the minister, was far short of the amount due for actual remittance.

In the letter dated March 4, 2021, Amaechi said NPA recorded an outstanding unremitted balance of N165 billion within the years under review.

But in her response to the Chief of Staff to the president shortly after her suspension,  Hadiza argued that the basis for arriving at the operating surplus of the NPA, upon which the budget office calculated the amount due as remittances to the federation account, was flawed and not in tune with the provisions of the Fiscal Responsibility Act.

She said in the response dated May 5, 2021, that the figures provided by the budget office as the operating surplus for 2017 and 2018 were higher than the actual figures derived from the NPA’s audited financial statements.

When asked to know if they had been contacted to give more explanation, one of the media aides to the embattled Hadiza, who spoke to our correspondent on phone, said it would be wrong for the former MD to comment on the issue, saying that whatever she says might be used against her.

The aide said Hadiza was also eagerly waiting to hear from the panel, the ministry or the presidency.

“You see, a panel has been set up to investigate the issue. The panel was given a guideline to which it must stick. We are therefore waiting to hear the outcome of the findings. But in fairness, I know that madam won’t comment on the issue now,” he said.

Our correspondent also reached out to the chairman of the panel, Auwalu Suleiman, for an update but he didn’t respond to text messages and calls at press time.

The reporter specifically requested in the text messages that the chairman should confirm if the committee had completed its investigation and submitted its report, and what were the major findings.

Another message was sent text to Amaechi seeking confirmation if he had received any reports from the committee and their major findings but there was no reply.

Daily Trust recalled that Amaechi, in a recent interview with Thisday, said the panel has not concluded its investigations, and went on to justify the long delay.

In the interview, the minister also hinted that the panel’s sitting might last for the rest of this administration’s tenure.

Amaechi said: “The panel has not finished. They are to investigate activities of five years. One year alone will take 10 months. But have it at the back of your mind that all we are doing is going through what happened in NPA for the five years that I never knew anything about NPA.”

He also claimed to be oblivious of the dispute between NPA and the Integrated Nigeria Logistics Limited (INTELS), saying: “We never even knew there was a crisis between INTELS and NPA”.

Industry watchers said to hear that the minister claimed he had no clue about the goings-on at NPA for the past five years was disappointing.

They wondered how possible it will be that Amaechi’s imperious disposition would remain oblivious of the activities of an agency under him.

Stakeholders in the maritime sector were also of the opinion that the entire process had been enmeshed in politics.

Chief Jolapamo, who spoke to our correspondent on phone, said activities of all the agencies of government in the maritime sector had been politicised.

He said: “This starts with the appointment of those who manage the affairs of the agencies to their removal.

“What do you expect from a system where one person can hire and fire heads of agencies at will? I have since lost interest in the whole exercise.

“A panel cannot sit indefinitely,” he said, alluding to the claim that the panel had no stipulated time to submit its report.

He said it was absurd that Amaechi had told a national newspaper that the panel might sit till the end of this administration (2023).

Also, the foremost maritime lawyer and Chairman of the Nigerian Ship Owners Forum, Mrs Margaret Orakwusi, said although she does not know the terms of reference given to the panel, she expected the members to stick to the guidelines given to them.