A Max Air aircraft reportedly with the Emir of Kano, Aminu Ado- Bayero, among its passenger, made an emergency landing 10 minutes after taking-off from… 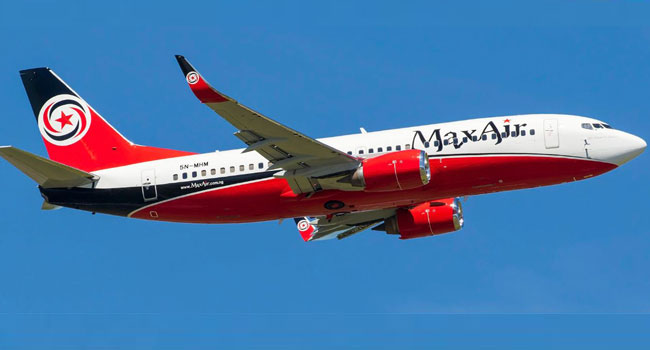 A Max Air aircraft reportedly with the Emir of Kano, Aminu Ado- Bayero, among its passenger, made an emergency landing 10 minutes after taking-off from the Malam Aminu Kano International Airport (MAKIA), Daily Trust reports.

It was gathered that the aircraft with the number VM1645 which was slated for take-off 1:30pm had a 30 minutes delay and was only about 10minutes in the air when it reportedly began to swerve until it made a detour.

It was initially thought that the incident was caused by an engine failure, but sources including a passenger on board, attributed it to a bird strike.

“The pilot calmly took the plane back to the Kano airport. It was repaired and the plane took off to Abuja and just landed safely in Abuja,” One of the passengers told Daily Trust.

In a chat with Daily Trust, Director of Maintenance of the airline, Engr. Muhammed Mubaraq, debunked the claim that it was a near death experience.

He said, “What actually happened was that during take off, we had a bird strike and the number two engine ingested some birds and damaged the blade.

“Our pilot followed the normal procedure and made an air return on landing. When he landed, the engineers inspected it and replaced the damaged blade. They carried out normal maintenance procedure and released the aircraft.

“As I am talking to you, I flew the same aircraft to Abuja. It is very wrong to say they had a near death experience.”

According to him, there was nothing untoward with what happened. He said bird strike is a common occurrence and the pilot did the right thing by making an air return.

He added that passengers were disembarked safely without any risk.