The residents mostly women and children sought refuge in nearby Dikwa town after the attack on February 28. 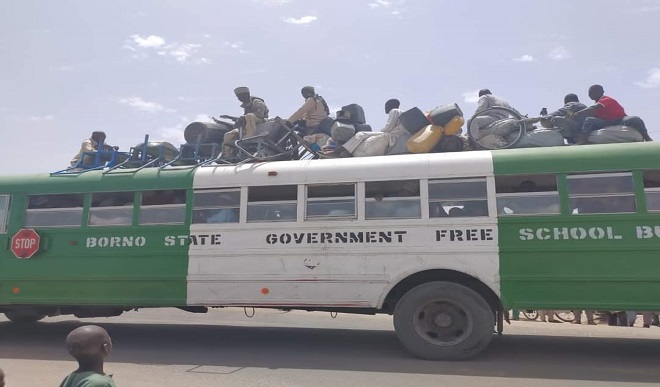 Displaced residents being transported back to Marte town on Saturday

Hundreds of residents who fled from Marte town, Borno State, after an attack on army formations have returned on Saturday.

The residents mostly women and children sought refuge in nearby Dikwa town after the attack on February 28.

The insurgents reportedly looted valuables and burnt an army base which housed a brigade and a battalion.

Troops recaptured the town a day after the attack following an offensive in which many insurgents were killed and their gun trucks destroyed.

Chief of Army Staff Lieutenant General Ibrahim Attahiru had given orders to the troops to retake the town before the onslaught.

Troop were said to have taken time to defuse explosives concealed by the insurgents before giving the residents the all-clear to return.

Commissioner, Reconstruction Rehabilitation and Resettlement, Engr Mustapha Gubio led the returnees who arrived in a long convoy of vehicles.