Many Nigerians among victims of Libyan airstrike

* Over 40 refugees killed, 80 injured as outrage greets attack Many Nigerians were among the dead in the bombing of a migrant camp in… 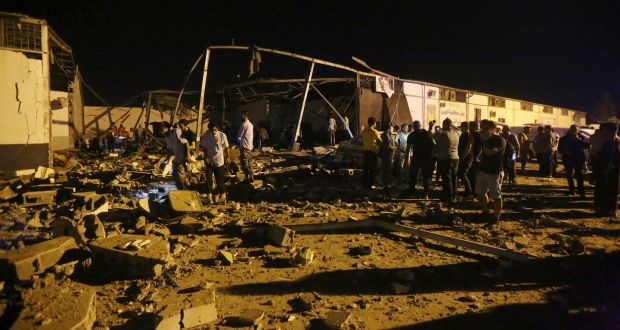 Libyan Red Crescent workers recover migrants bodies after an airstrike at a detention center in Tajoura.

Many Nigerians were among the dead in the bombing of a migrant camp in Libya where over 40 persons were killed.

Another 80 were injured after the airstrike targeted the Tajoura Detention Centre located in the east of Tripoli, the Libyan capital in the early hours of Wednesday.

Sources say many Nigerians were among the victims in the camp. An unconfirmed report says about 15 Nigerians might have been involved as head count of nationalities took place.

Daily Trust reports that many Nigerians are still stranded in many detention facilities in the restive Libya. The International Organization for Migration (IOM) and European Union (EU) have partnered the Federal Government to repatriate many Nigerians in Libya.

Over 14,000 Nigerians have so far been repatriated since 2017 when the programme started.

With many Nigerians still stranded in Libya and quite a number of them locked up in detention centres hoping to be called up through the IOM/EU programme, the airstrike which is yet to be claimed by any organization has claimed the lives of some of them.

The IOM and the office of the United Nation High Commissioner for Refugees condemned the attack, saying the “appalling toll in injuries and lives” from the attack “speaks to the deep concerns, expressed repeatedly…”

“This latest violence also speaks to the danger both IOM and UNHCR have warned over returning migrants and refugees to Libya after their interception or rescue on the Mediterranean Sea,” the body laments in a statement.

They called for “an immediate end to detention of migrants and refugees. We call for a guarantee of their protection in Libya.”

The statement read: “Nonetheless, such an attack deserves more than condemnation. UNHCR and IOM believe a full and independent investigation is required to determine how this happened and who was responsible, and to bring those individuals to account. Coordinates of such centres in Tripoli are well known to combatants, who also know those detained at Tajoura are civilians.

“Tajoura held at least 600 migrants and refugees—including women and children. The airstrike that left scores dead, also left dozens injured. For that reason, we expect the final death toll to include many more victims.

“Including those victims at Tajoura, some 3,300 migrants and refugees remain arbitrarily detained inside and around Tripoli in conditions that can only be described as inhumane. Moreover, migrants and refugees face increasing risks as clashes intensify nearby. These centres must be closed.

“We are doing all we can to help. IOM and UNHCR have dispatched medical teams, while a wider UN inter-agency team awaits clearance to visit the area.

“We remind all parties to this conflict that civilians must not be targets and must be protected under both International Refugee Law and International Human Rights Law.”