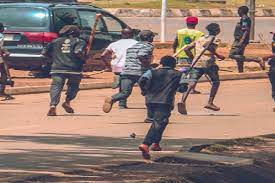 An unspecified number of indigenes of Uzo-Uwani Local Government Area of Enugu State were in the early hours of Monday attacked by hoodlums suspected to be herdsmen.

The victims were on their way to the market when they were attacked at Opanda village, in Uzo-Uwani, leaving many of them injured.

It was gathered that an unspecified number of people were killed in the attack, while eight sustained injuries.

A native said the villagers were still searching for more victims of the Monday attack in the farms and bushes.

He said the victims were rushed to the Bishop Shanahan Hospital, Nsukka, from where they were referred to the National Orthopedic Hospital, Enugu.

Daily Trust reports that the community suffered a similar attack in 2016 during which nine people were killed.

The spokesperson of the state Police Command, Daniel Ndukwe, confirmed the incident but was silent on whether lives were lost.

Ndukwe, in a statement, said, “Following an information received at Nimbo Police Division in the early hours of today, 26/07/2021, alleging that yet-to-be-identified hoodlums attacked some persons in a location at Opanda Village in Nimbo Community of Uzo-Uwani LGA, police operatives attached to the Division raced to the scene and found three young men with degrees of machete cuts.

“They were immediately rushed to a nearby hospital, where they are responding to treatment.

“Meanwhile, the area is calm, while the Commissioner of Police, CP, Mohammed Ndatsu Aliyu, has ordered the conduct of thorough investigation to unravel the circumstances surrounding the incident and bring the perpetrators to book. He also calls on residents of the area to remain calm and assist the police with useful information.”