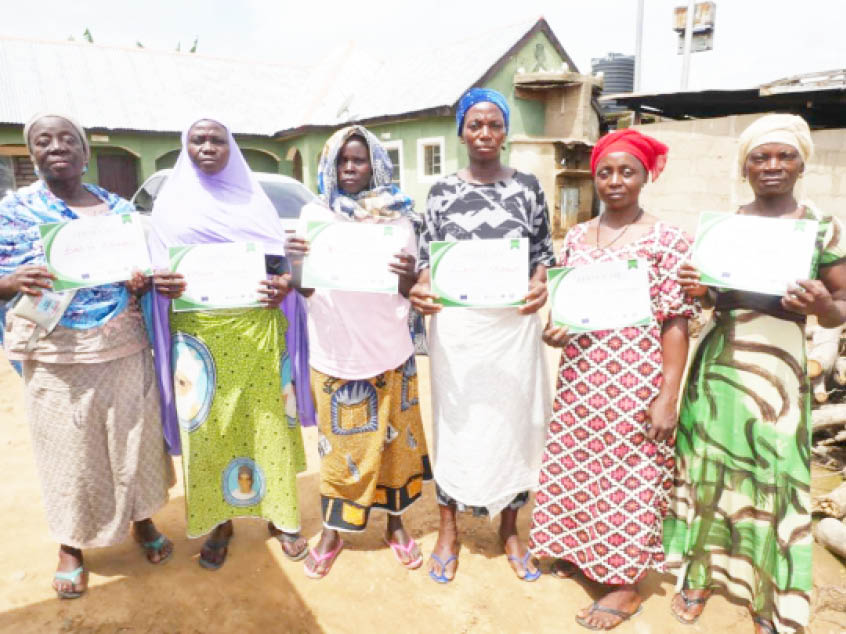 Some of the beneficiaries in Kwali

The rising insecurity in some rural communities in the Federal Capital Territory (FCT) has not only left in its wake a large number of vulnerable women, but also a retinue of severely malnourished children.

Many of the affected children are under five, and pre-school; and at a time they are in most need of adequate nutrition to ensure cognitive development and future contribution to the development of the society.

According to experts, the effect of Severe Acute Malnutrition includes increased risk of death, poor cognitive development, lowered performance in education and low productivity in adulthood.

They say the condition makes children nine times more likely to die from common childhood diseases such as diarrhea, pneumonia and malaria.

Findings reveal that Bwari and Kwali area councils have increasing malnutrition in children under the care of vulnerable mothers who earn little or no income.

The vulnerable mothers in these communities include widows, mothers from low-income households in vulnerable communities, uneducated/unemployed/single rural dwelling mothers and mothers living with disability and struggling to provide care for their children.

Praise Omari Sunday, a mother of six including a set of triplets all suffering from malnutrition said it has not been easy taking care of the nutritional needs of the triplets and the rest of her family.

She said, “It has not been easy taking care of three babies after having two children before, without work or any good source of income. Their father lost his job the very day I put to bed. He was working with a private cleaning company. I was five months pregnant, when I discovered I was carrying triplets.”

She said she has no source of livelihood at the moment despite being a university graduate, and her husband works as a security man in a private school with a salary of about N25, 000 a month.

She added that even when the children are ill, she can’t afford taking them to the hospital.

Hajiya Rabi Sule said she lost her daughter during an attack by bandits in Sokoto. She left behind a one-year-old daughter, Alimatu, who Rabi now struggles to fend for.

Alimatu suffers from Severe Acute Malutrition, and her grandmother says she is very small in size because she was not getting the right nutrients.

Yemi Joy, 36, has not been able to feed her baby with breast milk since birth because her breast does not secret milk.

The mother of four said the infant and the other child before him suffer from Severe Acute Malnutrition.

She said with little or no income, it has been difficult for her to buy baby formula so she gives the child only pap.

Asked if she adds any other thing such as crayfish, groundnut or milk to the pap, she answered in the negative.

The three women spoke to the reporter during an empowerment programme organized for vulnerable women in Bwari and Kwali area councils respectively.

The training exercise was organized by the International Society of Media in Public Health (ISMPH) via its Empowerment Strategy for the Prevention and Management Severe Acute Malnutrition (SAM) in the Federal Capital Territory (FCT), and funded by the European Union Agents for Citizen Driven Transformation (EU-ACT).

She said, “They educated us on how to feed our children with the things we farm because some of us grow crops but do not know how to use or mix them to get the right nutrients for our children.

“We also now know that we don’t need to cut down trees for charcoal. With the help of the back of groundnut, sugarcane, and corn that we peel, we can cook, no need for deforestation again.”

She said the women were also taught how to produce organic fertilizers for use on their farms, adding that a lot of vulnerable women suffer from poor harvests because they couldn’t afford fertilizers on their farms.

“Through the programme, we now know how to do organic fertilizer to sell and use on our farms to have bumper harvests, “she added.

The women who earlier narrated their ordeals with their malnourished children said they gained nutritional knowledge and skills that could enable them create sustainable businesses.

The Executive Director of ISMPH, Moji Makanjuola, said the project was aimed at curbing malnutrition through empowering women to produce organic fertilizers and other products.

Represented by Solomon Dogo, the program director ISMPH, at the Bwari training exercise, she said, “it is to ensure they have a means of survival because we noticed that one of the problems causing malnutrition is poverty and most of them do not have the means to take care of their nutritional needs. So, we decided to train poor women, who have malnourished children with life saving skills.”

She said after the training, beneficiaries would be provided with machines for producing organic fertilizers to enable them continue production.

She said the organization would also avail them opportunity to market their products as well as support them with off takers to buy products they produce.

“A child that suffers from Severe Acute Malnutrition is susceptible to all kinds of sickness and the doctors and nurses have said that if we get it from the beginning it can be stopped.

“This training is multipurpose because we are not just teaching them how to make money, but also what mothers should know like we have some of these foods they can give their children that are affordable and readily accessible.

“With the little money we hope they will make from these skills, they will be able to feed their children well,” she added while speaking at Kwali.

Chief of Barangoni, Bwari Area council, Danlami Nana, said the community is excited about the training on organic fertilizer production as the residents are predominantly farmers, and have poor access to fertilizers thereby leading to poor yields.

Esu Kwali, Dr. Shaban Audu Nizazzo, commended ISMPH, saying the economic empowerment would enable the women to fend for themselves and their families, and also encourage them to live independent lives.

Esu Bwari, Dr Ibrahim Yaro, who was represented by the secretary of the Bwari traditional council, Amos Musa Bwari, while thanking EU-Act and ISMPH for the programme, pledged to monitor its implementation among the women to ensure effectiveness and sustainability.