The Wife of the President, Dr. Aisha Muhammadu Buhari has called on the Health ministry and other stakeholders to make ending tuberculosis (TB) in the… 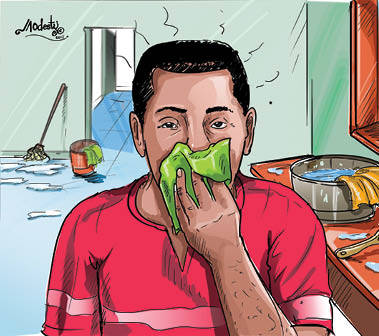 The Wife of the President, Dr. Aisha Muhammadu Buhari has called on the Health ministry and other stakeholders to make ending tuberculosis (TB) in the country a top agenda.

She made the call during the gala night for TB champions and survivors organised by Stop TB Partnership in Abuja.

She also called on the ministry to give her and states’ first ladies a specific schedule in tackling the disease, saying that in addition with the support of the private sector, TB will end in Nigeria.

While calling to the ministry to find a permanent solution to the burden of malaria in the country instead of spending so much on insecticide treated mosquito nets, she enjoined the media and celebrities in the entertainment sector to increase efforts in the fight against tuberculosis.

She said the fight against TB is a collective responsibility and that she would continue to do her best as a global TB champion and ambassador, to end the disease in Nigeria.

In his remarks, Prof. Lovett Lawson, Board chairperson of Stop TB Partnership Nigeria said TB is preventable and curable yet kills 4,500 per day, just as 18 Nigerians die every minute.

He said the rate of TB decline which is currently about 1.5 percent would need to increase dramatically to about 10 percent by 2025 globally if we are to end TB by 2030.

He said  it is time for leaders to step up action to diagnose and treat 40 million people  with TB by 2022 as agreed by heads of states at the United Nations high level meeting on TB.

Meanwhile, the federal government has launched the national plan for translating government’s commitments at the United Nations high level meeting on TB.

The minister of Health, Prof Isaac Adewole, the World Health Organisation (WHO) and other partners also launched the National Tuberculosis Catastrophic Cost Survey.

Speaking during the launch of the documents in Abuja on Wednesday, the minister who was  represented by Dr. Felix Ogenyi, Director, General Services, Federal Ministry of Health, said President Buhari participated in the first ever United Nations High Level Meeting on TB in New York last year.

She said the programme has translated all the target commitments into state by state commitments so that each state would know what cases they should find and the number of prevention they should undertake.

Lawanson said control of TB could not be confined to health facilities alone.

She said one of the problems of TB control in Nigeria was the social exclusion of people affected by TB in the society.

The National Coordinator said that TB patients incur cost in the process of accessing treatment adding that it is not supposed to be so.

She said: “Catastrophic cost should not happen on TB patients in Nigeria because diagnostic services and drugs were made available at health facilities in many communities to ensure that people access the drugs and services.

“Nigerians should embrace the TB treatment services made available by government and development partners to reduce out of pocket expenses,’’ she said.