Motorists in Abuja Wednesday said they are beginning to witness fewer queues at petrol filling stations since the weekend, but that comes with a N20… 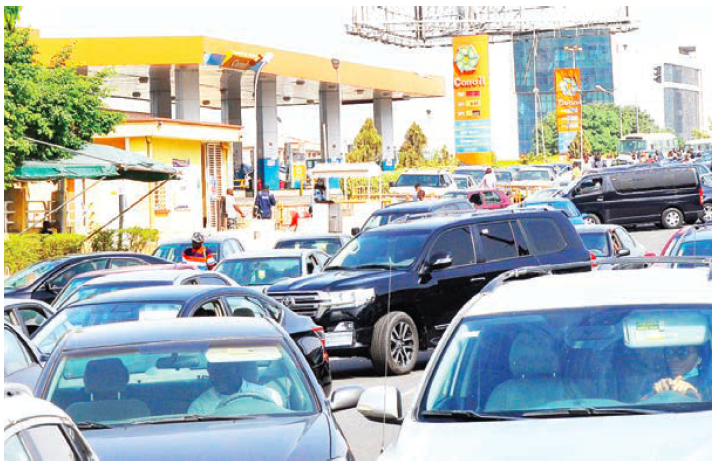 Long queue of vehicles at a fuel station in Abuja

Motorists in Abuja Wednesday said they are beginning to witness fewer queues at petrol filling stations since the weekend, but that comes with a N20 hike as major stations shunned the N165 official rate and now sell petrol for N185 per litre in Abuja and Kano.

Checks by Daily Trust on Wednesday in Abuja and nearby Nasarawa State indicate that while some stations still do not have petrol, some major stations that have the fuel, including AA Rano and Shafa, have adjusted their price boards to N185/l for petrol or Premium Motor Spirit (PMS) while diesel or Automotive Gas Oil (AGO) is sold for N850/l.

Some motorists at the stations said rather than the long queues and scarcity, they are comfortable buying at the new rate without spending hours looking for petrol.

Garba Musa, a taxi driver said: “We know all this while that this is what they are driving at. They should have just adjusted the price since and saved people the stress. When you buy in the black market, most times these hawkers mix it with water and it can destroy vehicle engines.”

Mr Amos Enehi also said consumers have no choice at the hands of oil marketers. “It is a huge energy crisis we are facing here in Abuja but we don’t have a choice, so we will buy at that rate. We call on the government to make necessary interventions to address this issue because petrol still sells at N165 in Lagos, why is Abuja different?”

Also in Kano, Daily Trust found that major stations that sold for N165/l last week now sell for N185 while other stations selling for N200 earlier, now sell the product for N220.

Amkar station sold for N220 while major stations like A A Rano and Aliko Oil now sell for N185, rising from N165.

A commercial driver, Malam Salisu Musa, said he observed the increase on Tuesday and that has affected fares.

Another motorist Usman Abdulkadir Eder said: “We woke up on Tuesday with a hike in the price,” he revealed.

A member of the Independent Petroleum Marketers Association of Nigeria (IPMAN), Oladele Amusan, said the marketers have no choice because the cost of running their stations has increased following the hike in diesel prices.

“We have been crying to the Nigerian Midstream and Downstream Petroleum Regulatory Authority (NMDPRA) for help and they have done their best but that has not solved the problem in Abuja and the hinterlands,” he noted.

An IPMAN official in Kano said the cost of transporting petrol from the coastal area has risen by 300% increase and that caused the hike in petrol price.

Just last weekend, the Natural Oil and Gas Suppliers Association of Nigeria (NOGASA) warned that the rising diesel prices and scarcity of foreign exchange (forex) would continue to stoke the petrol crisis.

The president of NOGASA, Beneth Korie, had said the administrative costs for marketers have risen and sought some government interventions.

NMDPRA recently raised the freight rate for petrol transporters to N35/km from N25 due to the diesel crisis but Korie said that only addressed the logistics issue but the administrative issues of depots and filling stations owners still remained, noting that a depot owner could spend over N20 million on diesel to power it for a week.

Just recently, the IPMAN, Abuja and Suleja Depot Unit declared a halt in petrol supply for one week ending last weekend over a N50 billion unpaid bridging claims by NMDPRA.

However, the agency said it had more claims and asked the association to come forward for verification. NMDPRA, which set prices, was also yet to react to the apparent flouting of the regulated petrol price by the marketers as of Wednesday.

Confirming this, the Major Oil Marketers Association of Nigeria (MOMAN) said the regulated N165 price is no longer realistic.

Mr Olumide Adeosun, Chairman, MOMAN, made this known on Wednesday during a virtual consumer protection workshop for Oil Marketers by the Federal Competition and Consumer Protection Commission (FCCPC).

According to a NAN report, he maintained that it would be difficult to enforce any kind of price control mechanism on marketers who had to slightly adjust their prices based on how much they bought products from the depots.