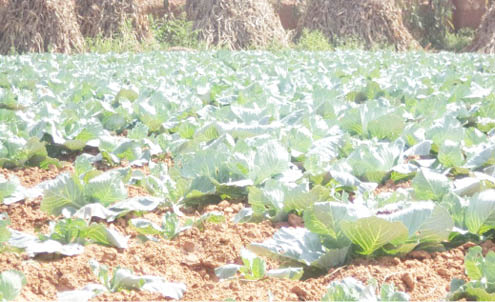 Cabbage farmers in the northern and central parts of Plateau have said the cultivation of cabbage has been very favourable because of the well-drained sandy loam soil and the climate of the areas.

Plateau State is the home of exotic vegetables, including cabbage, and stakeholders said due to the cool weather condition, the state produces the crop in commercial quantities, with tonnes being transported to the southern parts of the country.

The stakeholders added that the production of the crop and its demand in the country should provide the farmers in Plateau and other areas the crop is cultivated, a reasonable income.

However, there are challenges the cabbage farmers say are obstacles to the cultivation of the crop in the state. The most challenging include lack of capital, fertiliser and insects repellants they said.

Abdulkadir Abubakar, a farmer in Jos North LGA of the state, said the cost of pesticides in the market was worrisome, and that many farmers could not sufficiently apply them in their farms.

He said apart from that, “Fertiliser has become a source of concern. A bag of fertiliser that we used to buy between N10,000 and N15,000 is now between N20,000 and N27,000. It is too costly and is preventing farmers from expanding their cabbage cultivation.

“Virtually all farming inputs are very expensive now and that is why cabbage farming is also capital intensive. If you don’t have reasonable money at the moment, you can’t sustain cabbage farming especially for those cultivating it in large quantities,” he said.

Abubakar also said having money to buy fertiliser and pesticides was not enough to succeed in cabbage farming as inadequate water could also hinder its success.

He said “even when you have the money, you still need to have dam or reservoir to source water from for the crop. So once all these are available, you will earn money from cabbage cultivation.”

Daweng Thoma,  another farmer in Dorowa community of Barikin Ladi LGA of the state, also reiterated that the success of cabbage farming was dependent on the availability of capital in the hands of the farmers, saying inadequate resources to obtain farm inputs had always been a challenge.

He said, “If you are able to apply both manure and fertiliser sufficiently, you will have a bumper harvest because the fertility of the soil would be increased.

“Once you are able to obtain everything – fertilizer and pesticides and enough water for the crop, you will harvest bags of cabbage, and no matter the condition of the market, you will get some money with you because you will have cabbage in hundreds.”

Zaka Rajak, a cabbage farmer also in Dorowa village, said though capital was the major challenge, getting suitable land for the crop was another challenge associated with farming it.

He explained that “when you plant the crop on the land that is not suitable, you will definitely encounter problem. If it is land that is often dominated by grasses, you must always apply pesticides to kill the grass.

“If you don’t spray enough chemicals to kill the grass, the crop would be dominated by the grass, and thereby prevent the cabbage from growing.

“You will have to look for effective pesticides. This is very challenging. The immediate challenge of the cultivation is the issue of farm inputs which generally this year were difficult to get and very expensive in the market.

All the farmers who spoke with Daily Trust also said the success of the market was dependent on how much you sell the crop in the market, noting that if you harvest the crop and it is not expensive in the market, you are likely to incur loss.

The farmers said if you didn’t properly time when to cultivate the crop, you might miss the high demand period and your investment  affected.

They added that one had to  target festive periods like Christmas and New Year when the demand for it was high as  many farmers last year were not happy with the price.

Another thing with the cabbage farming according to the farmers was that you could cultivate it three times in a year unlike other crops. They said you can grow it after every three months.

The farmers said there is money in the cultivation of cabbage. The crop is patronized, especially during the festive periods when many people are in need of it.

They said buyers sometimes followed them to the farms because of the demand, and at that time, they record good return.

Rajak said, “Selling the crop at the appropriate time was the best in order to benefit from its cultivation. So, there is money in it.

Cabbage farming is even better than farming other crops because you can get more money than other crops, particularly, if you target the season.

How to succeed in cabbage farming

The farmers said cabbage farming would be profitable if certain measures are taken by both the government and the farmers.

They said if a farmer has enough capital, he would enjoy the farming as fertiliser and pesticides would not be issues to him.

They added that if there were enough dams, especially during the dry season, farmers succeed as cabbage needs water to grow. They said when all the requirements are provided, cabbage farming would thrive better in the state.

According to the state chairman of All Farmers Association of Nigeria (AFAN), John Chindap Wuyep, “If government would provide dams for the farmers, it will go a long way in helping us to farm year round because climate change is a reality and rain would go and the only thing that would assist the farmers is water from the dams. Without water, farming would not be possible.”