Liverpool and Chelsea search for form in Premier League

When the Premier League season began in August, the idea that Liverpool would be heading towards the World Cup break closer to the bottom three… 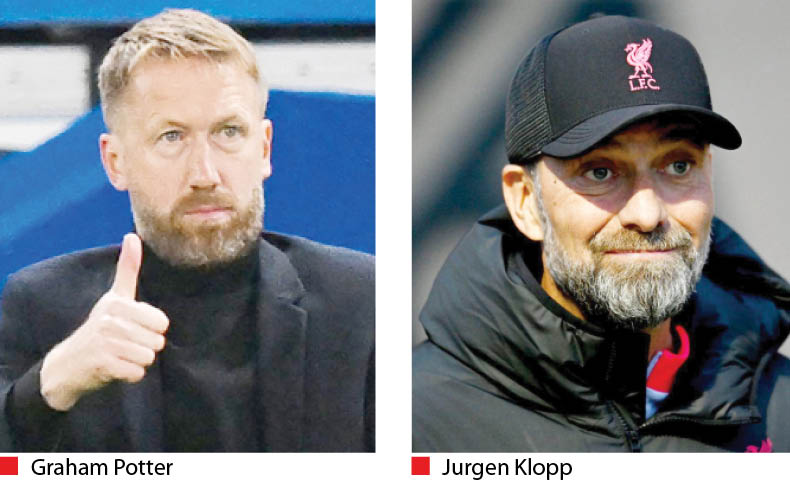 When the Premier League season began in August, the idea that Liverpool would be heading towards the World Cup break closer to the bottom three than top four would have seemed unthinkable.

But as Juergen Klopp’s misfiring side prepare for Sunday’s trip to third-placed Tottenham Hotspur that is exactly the position they are in points wise.

Klopp, at least is in good company when it comes to high-profile managers trying to halt worrying slides.

Graham Potter’s Chelsea host leaders Arsenal on Sunday with his honeymoon period well and truly over after last week’s humiliating 4-1 defeat at his old club Brighton & Hove Albion left them down in sixth place.

Liverpool’s predicament is the most surprising though.

Last week’s 2-1 home defeat by Leeds United, after the loss at Nottingham Forest the week before, means Liverpool, the only side able to challenge Manchester City in recent seasons, are ninth, 10 points behind Spurs and 15 adrift of Arsenal.

Injuries and a relative lack of investment in the squad in the close season have been factors in Liverpool’s decline, but some of their problems are self-inflicted and the intensity with which they are usually renowned for under Klopp has disappeared.

Like Liverpool, Chelsea managed a morale-boosting victory in the Champions League in midweek to top their group but how they needed it after a slump in their domestic form.

Successive draws with Brentford and Manchester United were followed by the debacle at Brighton to end Potter’s unbeaten start and if he did not realise it already, he now knows the level of scrutiny he will be under in the Chelsea hot seat.