Depending upon how one looks at it, scenes from Washington D. C. on Wednesday last week, January 6, when thugs instigated 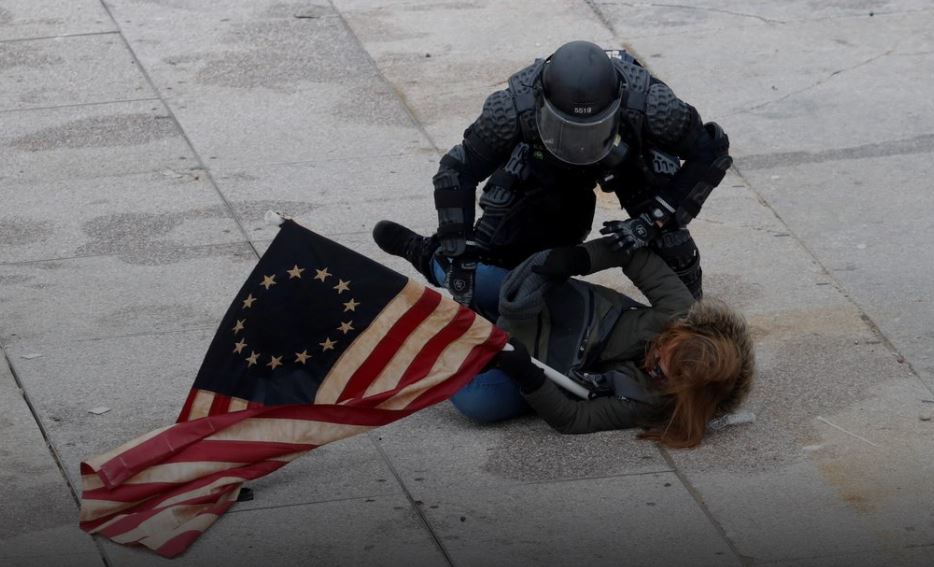 A police officer detains a pro-Trump protester as mobs storm the U.S. Capitol, during a rally to contest the certification of the 2020 U.S. presidential election results by the U.S. Congress, at the U.S. Capitol Building in Washington, U.S, Jan. 6, 2021. (Reuters photo)

Depending upon how one looks at it, scenes from Washington D. C. on Wednesday last week, January 6, when thugs instigated by President Donald Trump disrupted the symbolic ratification of President-elect Joseph Biden’s election victory were shocking, amusing, tragic, exposed the soft underbelly of liberal democracy or ended America’s holier-than-thou attitude towards nascent democratic nations.

Just when the US Congress began a joint session, chaired by Vice President Mike Pence, to open Electoral College votes sent in by the 50 states and ratify the winner of last November’s presidential election, “demonstrators” instigated by outgoing President Donald Trump stormed the Capitol, seat of the US Congress. They overwhelmed security guards, broke into the premises, forced the joint session to adjourn while congressmen and even the Vice President ran for cover.

Reminiscent of the later stage of #EndSARS protests here, they vandalized doors, windows and offices within the Capitol. One rioter posted videos of himself as he sat on House Speaker Nancy Pelosi’s chair. A rioter was shot in the chest while four other people died, including a policeman. Police reinforcements and National Guardsmen from DC and neighbouring Virginia State managed to chase out the rioters and enable Congress to resume sitting.

The selfish, lawless and lying hand of President Trump was all too visible in the sordid episode. Since early November when he lost the election to Mr Biden, Trump departed totally from the American electoral tradition, refused to concede, claimed without a shred of evidence that the election was rigged, got his supporters to file numerous court cases challenging the results in key battleground states that he lost. All 62 cases were thrown out by courts, including the US Supreme Court.

Mr Trump tried to subvert the election at every step. He directly interfered with Republican members of some state election boards and urged them not to certify the results. When they did, he interfered with state legislatures to ignore the results and chose Electoral College electors loyal to him, in effect negating the election results. When every state and DC certified its results and chose electors according to its voters’ wishes, Trump arranged for some Republican Congressmen and senators to try to stall Congressional ratification of electoral college votes.

He publicly urged Vice President Pence, who chaired the joint session, to stall the process. When everything else failed, Trump incited a mob to storm Congress during the session. He personally addressed the mob in front of the White House before they moved to the Capitol. CNN described the event as an insurrection; President-elect Biden said it was domestic terrorism; and US Congress is set to introduce articles of impeachment against Trump for the second time in two years, even though he has less than two weeks left as president.

Mr. Trump’s reckless, lawless, banana republic-grade actions brought shame and disgrace to his country, whose State Department annually evaluates other countries’ adherence to human rights, democracy and rule of law. It shows that even after 231 years, liberal democracy can be internally subverted by a power hungry ruler, who represents everything that his country’s Founding Fathers fought against. They established an elaborate system that they thought will free them from the despotism of English kings, only to end up with one after two centuries.

In all these ugly assaults however, American democracy will survive Donald Trump because of its very strong institutions and the strong sense of law and probity of its electoral, judicial, security and public service officers. No officials anywhere tampered with election results or agreed to reverse them under pressure. No American court at any level gave favourable rulings to Trump’s frivolous suits. Most senators and congressmen, of both major political parties, stood firm and threw out objections to the ratification process. Even Vice President Pence, known to be faithful to Trump, played his role strictly according to the law. Several Trump Administration officials also resigned in the wake of his disgraceful conduct.

The lesson for nascent democracies is that they must never invest their trust in strongmen or women to nurture and protect democracy. It is institutions, political, electoral, judicial, security, diplomatic, media, academic and the public service that must be built and nurtured as the ultimate guardians of democracy.