The trial of 47 Nigerian men charged with homosexuality, punishable by 14 years in prison, was delayed again on Tuesday, after witnesses for their accusers… 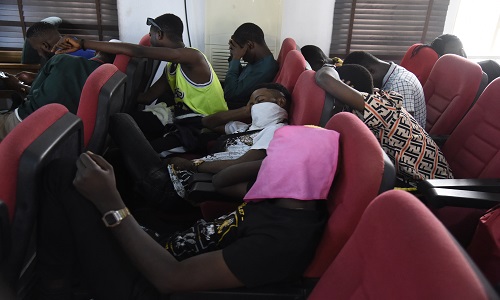 The trial of 47 Nigerian men charged with homosexuality, punishable by 14 years in prison, was delayed again on Tuesday, after witnesses for their accusers failed to appear in court.

The judge adjourned the trial for the seventh time since the men were arrested in a Lagos hotel during a police raid in August 2018.

They have pleaded not guilty before the High Federal Court in a case which is being closely watched by Nigeria’s LGBT community.

They are accused of “committing homosexual acts” in a “gay initiation party” yet the case against them has stalled repeatedly, with the judge criticising failings in the prosecution’s case.

On Tuesday, a police officer involved in the case gave testimony yet two other prosecution witnesses failed to appear.

The judge adjourned the hearing until April 2.

“Listen, the court will not stop you from trying to present a case but you must do it properly and according to law,” Judge Rilwan Aikawa said. “This is the last adjournment.”

Lawyers for the defence say the men were attending a birthday party where both men and women were present, but that the police let the women go and kept the men in custody.

A case simultaneously trying the men in a separate lower magistrates court on charges of “cultism” was struck out at a hearing this morning, Obi said.

A law passed in 2014 banned gay marriage as well as “same sex cohabitation”.

The law also called for 10 to 14 years in jail for public demonstrations of “amorous relations between persons of the same sex”.