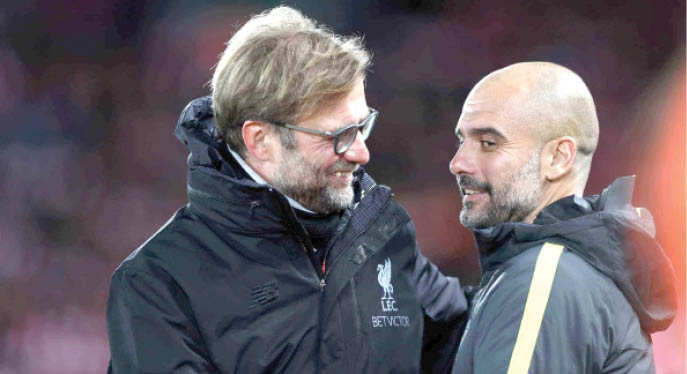 Jurgen Klopp says he is relishing the heat of the battle as quadruple-chasing Liverpool prepare to face Manchester City for the second time in a week, this time in the FA Cup semifinals.

Both teams have since confirmed their places in the Champions League semifinals and remain on course for a potential clash in the final of that competition in Paris.

Klopp said on Thursday he wanted to see improvements from his team, even though they came away from the Etihad with a point after a breathless match.

“City were really strong last week and we were not at our best so I would like to see a game where we are at our best as well,” he said. “That would be interesting, so let’s give it a try.”

The draw kept Liverpool in the hunt for an unprecedented quadruple of trophies after they won the League Cup earlier in the season.

“It has to be treated like a final, we have to,” said the German.

“That’s how it is pretty much and that’s how we approached it already since January since we started this little mission. You have to go all-in.”

He added: “Wembley’s a big pitch so we have to cover a lot of grass and to run a lot and to close big gaps but I think it will be cool. Of course, both teams will use the last game for analysis and we’ll see who uses it better.”

Liverpool have won the FA Cup seven times in their illustrious history but they have never come this far under Klopp, who became manager at Anfield in 2015.