Aman, Hezekiah Francis, his wife, Josephine Hezekiah, and their five-month -old child, Hanniel Hezekiah, have been abducted from their residence at Abattoir new extension in… 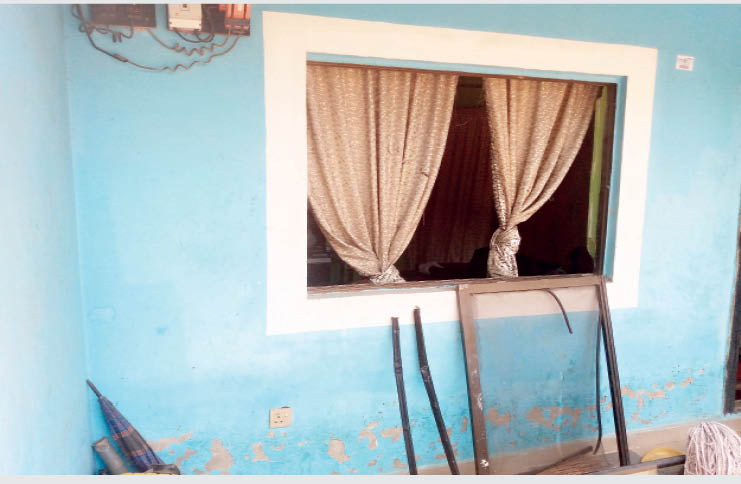 One of the windows destroyed by the kidnapers

Aman, Hezekiah Francis, his wife, Josephine Hezekiah, and their five-month -old child, Hanniel Hezekiah, have been abducted from their residence at Abattoir new extension in Abaji metropolis of Abuja.

Daily Trust learnt that the incident happened on Friday night.

While the man’s wife and the child were released after walking some few meters away from their house, the husband is still said to still be with the abductors.

Some residents had earlier hinted Daily Trust about the incident, but Josephine Adeh, Federal Capital Territory (FCT) Police Command spokesperson, dismissed the report.
When contacted, Adeh, a Deputy Superintendent of Police, had said, ”There is no such incident within the FCT.”
She had said the command would not rest on its oars in ensuring that all criminal activities are rooted in the capital city, adding that all boundaries that link Abuja with other States are being closely monitored by the vigilant officers of the command.

But the victim’s wife later confirmed the incident, narrating how gunmen broke into their residence around 11pm on Friday.

She said the armed kidnappers scaled over the fence to gain entry into the house.

She said some of them surrounded the house while others who got in destroyed the burglary of their windows from where they entered into the room.

“They first went to the first flat where my younger sister was sleeping and destroyed the door, but luckily they couldn’t see her where she was hiding. They now came to the main flat where my husband and I were and took us away,” she said.

She said while they were being taken away, after walking some few meters away from house, the kidnappers told her to go back since she was breastfeeding a child.

Attempts to make Adeh react to the woman’s claim did not yield results as she neither answered calls nor replied a text message sent afterwards.

Daily Trust had reported how some criminals including bandits are advancing towards the capital city from neighboring States like Niger, Kogi, Nasarawa, Plateau and Kaduna.