Keyamo: How Not to be A Campaign Spokesman

By: Phrank Shaibu As far as media spokespersons in Nigeria go, Mr. Festus Keyamo, SAN, the Minister of State for Labour and spokesman for the… 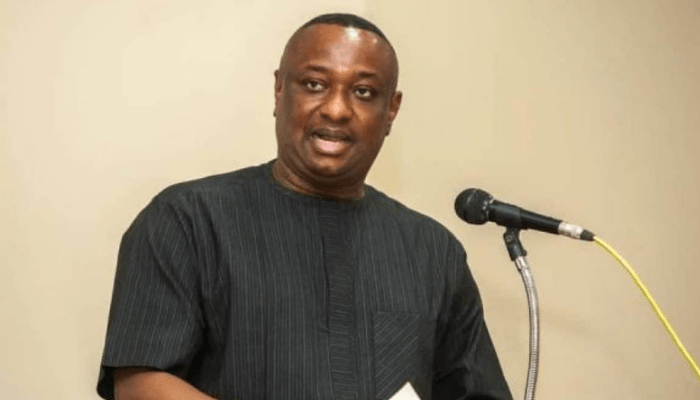 As far as media spokespersons in Nigeria go, Mr. Festus Keyamo, SAN, the Minister of State for Labour and spokesman for the All Progressives Congress (APC) Presidential Campaign Council must rank among the most incompetent. Media spokespersons, by convention, should, among other qualities, be able to self-edit. In other words, good spokespersons should choose their words carefully so they don’t insult the sensibilities of their audiences.

For the avoidance of doubt, a good spokesman is attuned to his audience, and is aware of boundaries, and knows what will motivate people to stick with his message; and what will cause them to switch-off! In the case of Festus Keyamo, the opposite seems to be the case. Far from working hard to make friends for his principal and the APC, he does everything to attract the wrath of the Nigerian public to himself and his paymasters.

Last Friday, I watched Keyamo’s interview on the popular Channels TV programme, Politics Today from start to finish and have come away feeling fulfilled that my long-held belief that the likes of Keyamo should never go anywhere near Public Relations had just been reinforced. I will take the three or four issues he raised during the interview.

First, Keyamo was asked to explain what the Federal Government was doing to end the lingering strike embarked on by the Academic Staff Union of Universities (ASUU), and his response was predictable.

Whatever message Keyamo intended to convey in that arrogant remark was lost by his choice of words, which leaves very much to be desired of a Minister of the Federal Republic and a Chief marketer of a presidential candidate. To describe his response as uncouth is an understatement, even as it goes to underscore only one fact; that Keyamo is incapable of weighing his words before uttering them.

To be sure, Ngige was asked to hands off ASUU negotiation apparently because of his arrogance. Now he is replaced with Keyamo. Replacing Ngige’s arrogance with Keyamo’s haughtiness makes the whole negotiation process look like a farce. Keyamo’s solution is that parents of university students should appeal to ASUU members to call off the strike. What the heck?

I thought I had seen the worst of Keyamo’s brashness, and combustible temper until he was asked to explain what the Federal Government was doing to end the problem of banditry currently ravaging the North West and North Central geopolitical zones of the country. In those minutes, Keyamo sunk lower than he had ever been in the public estimation of him. He dismissed dare-devil bandits who are currently holding more than forty passengers of the ill-fated Abuja train in captivity as comedians. Isn’t that callous for a government that has failed to deliver on the three key campaign promises it made to Nigerians? Little wonder he begged to defer explanation on the general living condition of Nigerians “until jungle matures.” Whatever that means.

Keyamo holds the view that “when the jungle matures,” and not the moment, can properly and fairly assess Buhari’s custodianship of Nigeria. He says the agonies of the moment will yield to the nation the proper gains in the fullness of time when the President will start commissioning projects. In response, i can only say that we await that fullness of time but believe, nonetheless, that the seven years of Buhari’s stewardship compels a provisional assessment of what will be called the “The Dark Buhari Years, 2015-2023”.

The outstanding feature of the period has been a story of blood, tears and sweat! An interrogation of the last seven years reveals that the Nigerian economy, potentially Africa’s most viable, is now one of the continent’s most disastrous under Buhari. But not so the personal fortunes of those in the corridors of power.

It is public knowledge that APC members who were living from hand to mouth before the party came to power in 2015 are now reputedly among of the world’s richest men. Conversely, ordinary Nigerians are now resigned to what seems a hopeless fate, sleeping with only one of their eyes closed because of the high level of insecurity that has never been witnessed before in this country.
Only last May, the National Bureau of Statistics (NBS) put the nation’s inflation rate at 17.71 per cent but the ordinary Nigerian who can barely manage to feed properly and is afflicted by malnutrition and disease knows that economic figures, officially concocted, in no way actually represent the reality of his daily existence.

A further pauperization of the marginalized Nigerian majority has been achieved under President Muhammadu Buhari, courtesy of the IMF whose mandatory prescriptions the country has had to take since he assumed office in 2015. The Naira has been devalued by more than 300% since 2015− one dollar which sold for about N230 in December 2015 at the parallel market is now going for N710.
This is APC’s report card –of blood, tears and sweat; This is the honest truth that Nigerians expect to hear from Keyamo, and not some flight of fancy prophesy of how a Bola Ahmed Tinubu will transform Nigeria into an Eldorado.

Regarding his comments on former Vice President Atiku Abubakar, I will forgive Keyamo if he does not remember the executive powers that Vice President Atiku Abubakar wielded between 1999 and 2007. I reckon that the Learned Silk was still a rookie still struggling to set up his law practice when Atiku was in charge of the affairs of State. I was not too young during the period under reference but in case Keyamo was, or in case he needs some schooling on Atiku Abubakar’s record, a peep into the events of the Obasanjo presidency will suffice.

In the period leading to the return to democratic governance in 1999, Nigeria was a pariah nation in the international community. The United States and other countries placed several embargoes on Nigerian military officials, the aviation sector and other areas of diplomatic interaction. Foreign investments were pulled out of Nigeria and directed to other nations. Many countries advised their nationals to stay away from Nigeria except it was absolutely necessary to do otherwise. So, on assumption of office in 1999, President Obasanjo embarked on a shuttle diplomacy that was targeted at the improvement of Nigeria’s image in the world and the attraction of foreign investment and support. In the space of four years, Obasanjo traversed the planet earth by undertaking over 300 foreign trips, during which Atiku Abubakar was firmly in charge of the running of the affairs of the Nigerian federation. Governors and Ministers all reported to Atiku. Keyamo can cross check this fact from his newest paymaster, Asiwaju Bola Ahmed Tinubu who was the then Governor of Lagos State.

All said, it is easy to see that Keyamo’s first outing as the spokesman for the APC Presidential Campaign Council was a disaster. The reason is simple: he lacks the basic knowledge of the role of a Campaign Spokesman. A Campaign Spokesman makes friends for his candidate and his political party, he communicates to create good public image for his candidate. A Campaign Spokesman makes supporters out of enemies and not the other way round. His job is not to create enemies for his Candidate and his political party nor is it to make them despised or seen in a bad light.

As a free tutorial, Keyamo should know that good political communication doesn’t consist in defending errors or insulting a critical public opinion. It seeks to create understanding instead. If you face a PR challenge, like the APC presidential campaign council faces at the moment, talking down to the critical public is like approaching a problem by methods that could make it worse.
Finally, I can figure out why Keyamo’s panic disorder has taken a turn for the worse−he has a lot of work to do, since marketing Asiwaju Bola Ahmed Tinubu is the most herculean task ever. Keyamo would have to defend Tinubu’s age, his health, Tinubu’s certificate which he once sued the Lagos State House of Assembly members in a case ‘Keyamo vs Lagos State House of Assembly with docket number ID/639M/99 before Justice C.O Segun of the Lagos State High Court, his state of origin, the source of his wealth, Muslim-Muslim ticket and many more.

I honestly do not envy Keyamo!