With the increase in the consumption of grasshoppers in Kano as snacks, many traders in the commercial city have diversified into its import, going as… 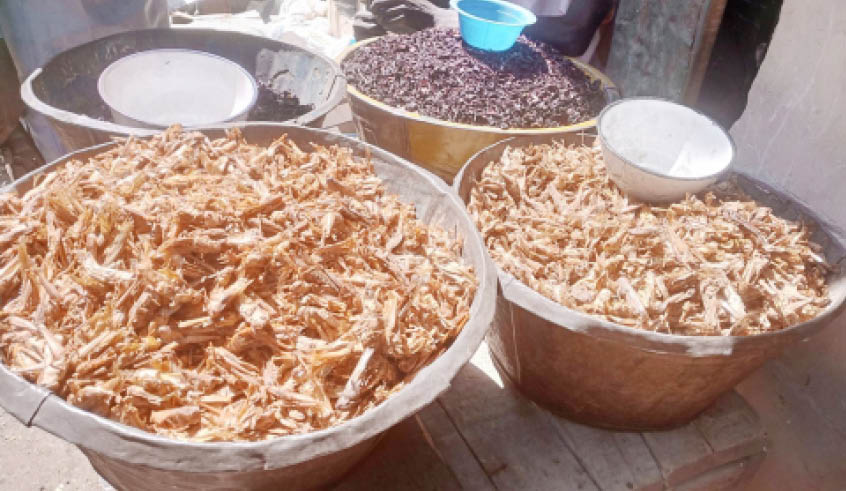 With the increase in the consumption of grasshoppers in Kano as snacks, many traders in the commercial city have diversified into its import, going as far as Niger Republic to bring in the delicacy, Daily Trust Saturday reports.

Grasshoppers, which are more renowned for their destructive propensity on plants all over the world, have now become a delicacy and source of income for residents of Kano, Borno, and many other states in the northern part of Nigeria.

This has not always been the case in Kano, as munching a fried and crisp grasshopper used to be frowned upon by many (men in particular) but more associated with women (most especially pregnant women).

Grasshoppers, alongside fish, are specifically mentioned as a lawful dead meat in Islam, the prevailing religion in the region.

But today, grasshopper, locally called Fara, is packaged and sold in shopping malls, supermarkets, and delivered from one state and country to another, and now consumed even among the elite, regardless of gender.

Shift of trade in grasshopper business

An old grasshopper trader in Rimi market in Kano, Muhammad Bello, told Daily Trust that Fara business has become very popular in Kano that importing from Niger Republic alone is not sufficient.

“A few years back, there are just five of us importing dried grasshoppers from Niger Republic and Maigatari Market in Jigawa, but now, because of the increase of consumers, we import them from states within the country.

“States like Bauchi, Yobe, Borno and Katsina are also now our major suppliers.

“Now many people come to Kano to buy from us because they have realised how profitable the business has become worldwide. It used to be a low-key business that people underestimated.

“People didn`t realise the fortune we are getting, because even back then, I used to sell 10-20 measures  per day, that’s why I introduced my son to the business. He has his own stall where he sells grasshoppers and hibiscus leaves. The grasshopper business alone brings in more money than any other food spices we sell,” he said.

Bello added that with the boom in the business as a result of an increase in consumers, he now sells between 20-30 sacks on a good day. He said the least he sells is three bags per day.

He identified three different types of grasshoppers they sell all year round to vary by season and size.

“The biggest reddish one called ‘Zanka’ comes during intense Harmattan season, and it’s the best, because it’s oily, and therefore consumes less oil when preparing it.

“Then there’s the light brownish one that has thorns, we call it ‘Babe’, and it’s the one you’ll find in the market now. And lastly, there’s ‘Kwarsaye’. They are the smallest ones found during the rainy season,” he said.

On why more people have now shown interest in its consumption, Bello said he learnt that medical practitioners have advised that grasshoppers have nutritional value.

“I once overheard a medical doctor saying such things on radio, and you know how our people listen to radio.

“Then there’s a revolution of packaging it to attract the attention of the rich and posh people,” he added.

Zainab Mu’awiya Musa is a fried grasshopper seller. She said people now consume it because doctors say it is beneficial to people suffering from diabetes and other diseases.

“People like things that are sweet and beneficial to their health. And doctors are saying there’s nothing wrong with consuming it, as long as people wash it well before frying it,” she said.

Why we now consume grasshoppers – Residents

Daily Trust Saturday interviewed some residents on why grasshopper has suddenly become very popular, especially among men who used to see it as repulsive in the past.

Musbahu Inuwa said in the past, he used to refrain from eating it because merely looking at it made him ill.

“Then accidentally, my girlfriend, who is now my wife asked me to taste it or she’ll break up with me. I knew she was kidding, but I didn’t want to let her down, so I ate it. That was the first time, and I fell in love with it immediately, and now it’s my favourite snack,” he said.

Another resident, Halliru Yusha’u, said he recently began eating grasshopper when he saw a fancy picture of it on Instagram.

“I saw it on Instagram, and saw all those rich women ordering it, so, to blend in, I did the same. It is now one of my favourite snacks. And as I am talking to you now I have a bucketful in my room.

“Its popularity might be because it is cheap. You can buy N50 Fara regardless of how expensive things are. What snack can you buy with that amount now?” he asked.

Zahra’u Nasir Muhammad disclosed that she had been eating Fara for over than 10 years.

“I love it because it is very tasty,” she said.

The founder of Crunchy Fara Company, Aisha Adamu Sadiq, said since she got the idea of modernising the business of fara, it has become more profitable.

“I officially launched my fara business on 10th December, 2019 with the name AyeeshFries, also known as Crunchy Fara, as a joke on WhatsApp. I posted a pack of grasshoppers on my WhatsApp status and out of nowhere people started asking me if I am the one selling it.

“Two of my friends convinced me to start selling it when they viewed my WhatsApp status, and without my consent, they started advertising it on their social media handles, and that was how I started selling grasshoppers,” she said.

As with every other business, regardless of how popular it is, it needs capital and profit to thrive. Ms Sadiq told Daily Trust that she started with little investment, and is making a high profit.

“I started this business with N3,000. I made 10 packs of fried grasshoppers, and back then, each pack cost N500. Then I gradually moved from 10 packs to 60 packs per week.

“Later on, we improved the packaging and the cost rose from N500 to N1000 and above, depending on the size of the pack,” she said.

Ms Sadiq said the feeling of getting daily income from a business she built from scratch is very empowering, adding that it made her realise that creativity is key in business.

She also explained that despite inflation, prices of the packaged product have remained unaffected.

Daily Trust Saturday gathered that the recent popularity of grasshoppers among the elite in Kano is not unconnected to its advertisement on different social media platforms, especially by users with a wide reach.

This is one of the reasons entrepreneurs like Aisha seized the opportunity to advertise on social media handles, especially via Instagram, where posh people subscribe to it, more than any other social media platform.

“Instagram has been helpful in marketing my business, as most of my customers come from there. And yes! 80% of them are female. That’s why we started offering delivery services for our vast customers across the country – from states like Kano, Kaduna, Jigawa, Zamfara, Sokoto, Kebbi, Lagos, Ibadan, Bauchi, Gombe, Nasarawa, Niger and Abuja.

“The popularity of this business is not limited to Nigeria, now people from other countries are buying Fara from Nigeria. It might be the influence of social media, or because our people living there, or those whose study and work introduced them to it, that`s why I have to expand my delivery service to those countries.

“Countries we have delivered to are the UAE (Dubai), Ethiopia, Azerbaijan, UK, USA (Washington DC), Sudan and Niger Republic,” she added.

Auwal Musa Umar is a registered nutritionist, dietitian and chairman of the Institute for Dietetics in Nigeria, Kwara State chapter, told Daily Trust Saturday that grasshopper is safe to eat, nutritious, delicious, and also considered a suitable alternative to chicken, beef, meat, birds, fish and other seafood.

“Grasshopper is an excellent source of essential protein and fat, which serve as a body building food, and to generate energy. It also contains zinc, which helps boost the body’s immune system.

“It contains iron and calcium, which increase the blood level of the body, and makes the human bone and teeth stronger, and many other vitamins and nutrients that are essential for the healthy functioning of the body,” he said.

He, however, warned that, like every other prepared food items, grasshopper can be harmful if proper hygiene is not considered.

“And, just like any other fried and spicy food, it can lead to blockage of blood vessels which could result in high blood pressure, and other cardiovascular diseases and hypertension. So, advisably it should be smoked rather than fried.

“Another disadvantage is the spices added to it. There’s a recommended daily intake of the chemical substances that are used in producing the seasoning we normally prepare food with. And these substances can cause high blood pressure, liver and heart diseases among others.

“The daily requirement is a teaspoonful, but you can find more than a tablespoonful inside a very small, handful of fried grasshopper, because that’s what makes it delicious, and attractive to customers,” he added.