Muhammad Sani Abacha, who emerged as a factional governorship candidate of the Peoples Democratic Party (PDP) in Kano, has sued the Independent National Electoral Commission… 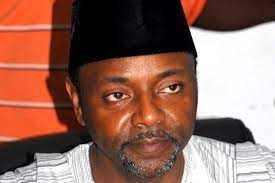 Muhammad Sani Abacha, who emerged as a factional governorship candidate of the Peoples Democratic Party (PDP) in Kano, has sued the Independent National Electoral Commission (INEC) for recognizing Sadiq Wali as the candidate of the party in the state.

Daily Trust reports that the internal crisis within the PDP in Kano had led to parallel primary elections where Abacha, a son of late former Head of State, General Sani Abacha, and Wali, a son former Minister of Foreign Affairs, Ambassador Aminu Wali, both emerged as the candidates of the party for the gubernatorial election.

Abacha had therefore approached a Federal High Court in Kano to “reclaim” his mandate in a suit where INEC, Wali, PDP and the state chairman of the party, Shehu Wada Sagagi, were listed as the respondents.

In the suit filed on Thursday, Abacha asked to be declared as the Kano governorship candidate of the PDP and for the court to validate the primary election that produced him, which was monitored by the first defendant, INEC.

He is also asked the court to order the substitution of the name of Wali whom INEC published as the Kano PDP governorship candidate with the argument that, the primary election conducted on May 25th, 2022 under the state party leadership of the 4th defendant, Sagagi was in compliance with provision of section 84 (1) & (5) (b) (i) & (ii) of the Electoral Act 2022 and so his name ought to be published by INEC as the candidate of the PDP.

Similarly, Abacha is seeking an injunction restraining the first defendant, its officers, agents or privies from recognizing the second defendant or any other persons apart from the plaintiff as the authentic and lawful gubernatorial candidate of the third defendant in Kano State for the 2023 governorship election.

Daily Trust reports that the INEC chairman, Professor Mahmood Yakubu, who was in Kano on Wednesday had told journalists that its state office had truly monitored the election that produced Abacha, “but before the submission of the names of candidates, another legal issue arose.”

He, however, assumed that the electoral umpire is “not a political party, we have no candidate in the election. So, we will do whatever it takes to be fair to all political parties. After all, this is essentially an intra-party matter.”

Meanwhile, a date for the commencement of the case is yet to be fixed.