Nigeria’s governing party, the All Progressives Congress (APC), on Saturday, announced the current First Lady, Aisha Buhari, as the leader of its women’s campaign team.… 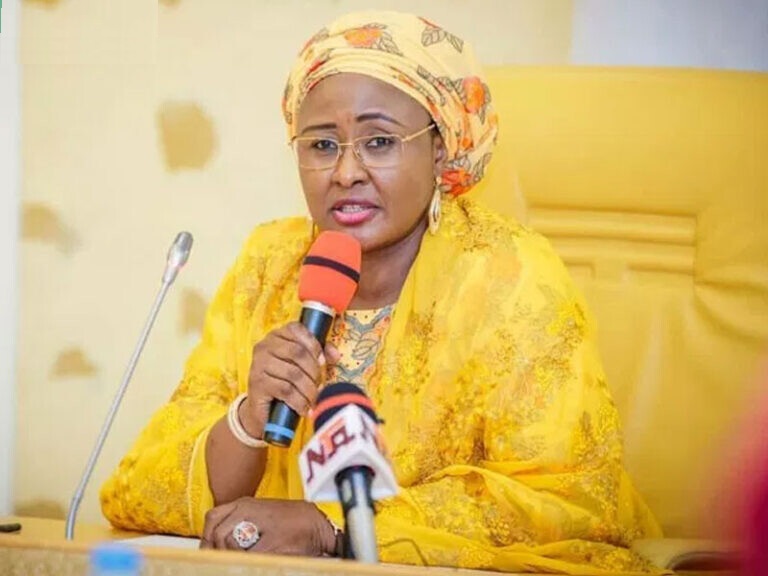 Nigeria’s governing party, the All Progressives Congress (APC), on Saturday, announced the current First Lady, Aisha Buhari, as the leader of its women’s campaign team.

Named the “Tinubu/Shettima Women Presidential Campaign Team”, the First Lady is expected to lead the women’s wing of the party to victory as its grand patron.

They will be serving as Chairman and Co-Chairman of the women’s campaign team respectively.

This was contained in a statement issued by Rinsola Abiola, daughter of late Chief MKO Abiola and active member of the APC, who was also named in the media and administrative committees in the women’s campaign team.

Asabe Vilita Bashir, a former member of the House of Representatives from Borno will serve as national coordinator while Lauretta Onochie, a prominent woman within the APC and a senior aide in the Presidency, will deputise her.

The women’s campaign in the North-West Zone will be coordinated by Dr Zainab Baugudu, wife of the Kebbi State governor, while Mrs Falmata Zulum, the first lady of Borno State, will be in charge of the Northeast.

In a similar vein, Olufolake Abdulrazaq, the first lady of Kwara State, will coordinate efforts in the North-Central and Mrs Sanwo-Olu, wife of the Lagos State governor, will superintend over the South-West.

The First Lady of Imo State, Chioma Ikeaka-Uzodinma, will also coordinate the South-East while Linda Ayade, wife of the Cross River State governor, will spearhead the women’s campaign in the South-South.

All governors’ wives are to serve as state coordinators in APC states, while notable APC women such as Florence Ajimobi, widow of the former governor of Oyo State and Zainab Ibrahim, the APC Deputy National Women Leader, among others, were chosen to coordinate activities in states not controlled by the APC.

The administrative committee is led by Hon. Wahab Alawiye-King, an influential Lagos politician and close associate of Oluremi Tinubu, also doubles as the chairman of the committee on strategic planning.

Also heading the committee on operations and logistics is Senator Fatima Raji-Rasaki while Sarafa Modele-Yusuf, a seasoned media practitioner, is to head the Media and Strategic Communications committee.

The Finance and Special Duties committee is to be headed by the former deputy governor of Lagos state and Senior Special Assistant to the President, Princess Adejoke Orelope-Adefulire, while the Diaspora Mobilisation Committee is to be chaired by Abike Dabiri-Erewa.

The Creative and Entertainment committee also has the seasoned screen diva, Joke Silva, as its chairman, and includes other members such as Toyin Adegbola, Esther Wright, Rose Odika and Hadiza Kabara, among others.

The Directorate of Contact and Mobilisation has 944 members including Hon. Tolulope Akande Sadipe, Hon. Rekiya Yahaya, Zainab Ikaz-Kassim, among others.