Fulani leaders have alleged the killing of 81 cows and rustling of 32 by suspected local militia on Thursday, near the Collage of Accountancy in… 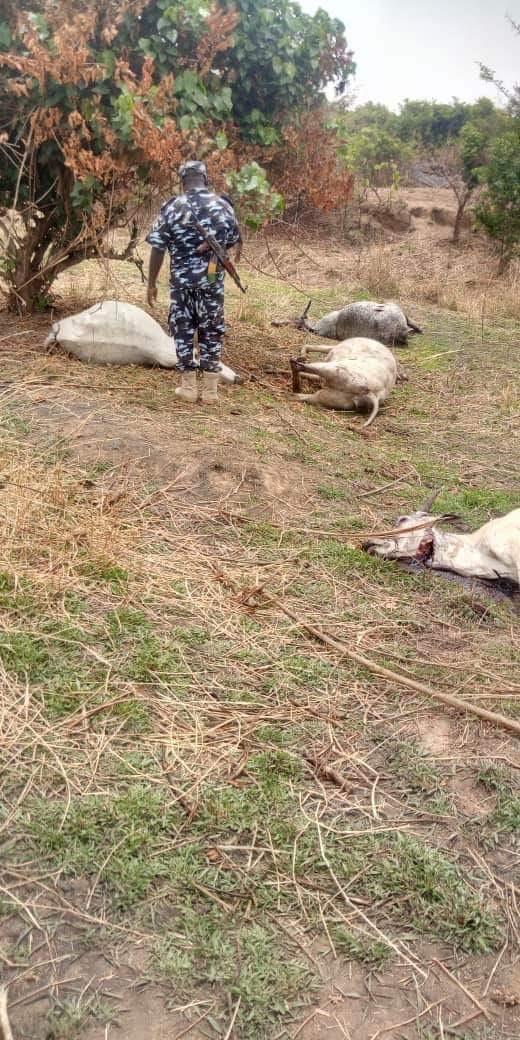 Some of the cows killed by militants in Kwall, Bassa local government area of Plateau State.

Fulani leaders have alleged the killing of 81 cows and rustling of 32 by suspected local militia on Thursday, near the Collage of Accountancy in Kwall, Bassa local government area of Plateau State.

MACBAN Chairman in Plateau State, Muhammad Nura Abdullahi mailed pictures of the dead cows and told journalists that 81 cows had been shot dead with others matcheted, 32 rustled while 48 were injured but eventually taken to the slaughter house to avoid further loss.

Abdullahi said both Operation Safe Haven and the Plateau State Commissioner of Police, Isaac Akinmoyede had been notified of the incident and had sent representatives to take records of the carcass of the cows.

“OPSH sector 6 is aware and I personally reported to the Commissioner of Police, who advised that I take the matter to the DPO for documentation which has been done. The Area Commander and the DPO have visited the scene and seen the evidence,” he said.

On his part, the National President of Jonde Jam Fulani Youth Association of Nigeria, Saeedu Maikano said the attack was deliberately done to spite the cattle owners and wondered why the state government was yet to issue condemnation.

According to Maikano, “is the government saying it cannot protect us and our property? Do they know how long and how much it cost to rear one cow to the level of maturity? This attack is deliberate and unprovoked and I don’t think the state government is serious about protecting us.”

The Police Public Relations Officer DSP Tyopev Terna continued to avoid comment despite promising to call back or send a statement in the last two days but Operation Safe Have Media and Information Officer, Major Adam Umar confirmed the killing of the cows, saying the incident had occurred around the dam, opposite the College of Accountancy in Kwall while the cattle were grazing.

Major Umar said the attackers had chased the cows to a forest area and shot dead several as well as rustled others.

He said though, he could not give the exact number of cows killed and those rustled, the task force was doing everything possible to trail the assailants.