Senator Ademola Adeleke, governor-elect of Osun State, has been issued the certificate of Return of Saturday's election. 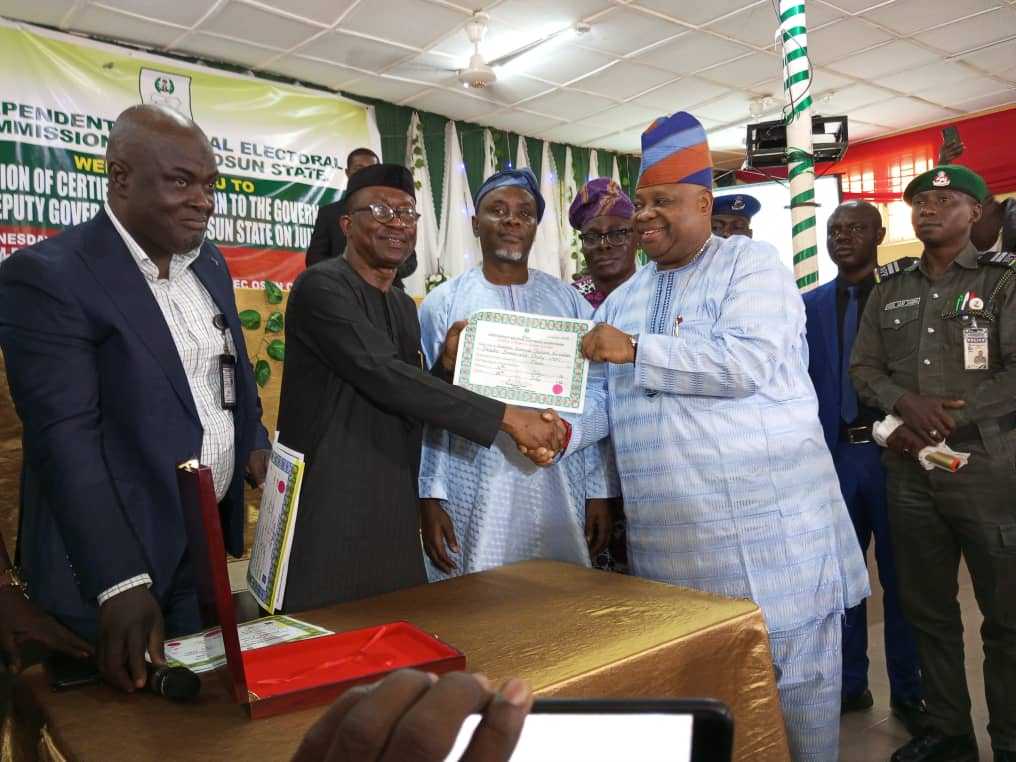 Senator Ademola Adeleke, governor-elect of Osun State, has been issued the certificate of Return of Saturday’s election.

The Independent National Electoral Commission (INEC) issued the certificate to him in Osogbo, the state capital, on Wednesday.

Adeleke, who ran on the platform of the Peoples Democratic Party (PDP) defeated Governor Gboyega Oyetola of the All Progressives Congress (APC), who was seeking reelection.

David Adeleke, music star better known as Davido, had stirred a controversy when he raised the alarm that INEC had not issued Certificate of rerun to the winner, who is his uncle, 48 hours after the election.

Responding, the National Commissioner and Chairman Information and Voter Education Committee (IVEC) of INEC, Festus Okoye, had said the commission had up to 14 days to issue the winner of an election the certificate of return.

But an official of the commission whom spoke off the record told Daily Trust that INEC would present the certificate to Adeleke on Wednesday.

“The National Commissioner in charge of Ogun, Ondo and Osun states, Prof. Kunle Ajayi, is still in the state and would likely present the CoR to the governor-elect tomorrow (Wednesday) in the state.

“The commission has 14 days according to the law of the land and the 2022 Electoral Act, to issue the CoR to winners of elections,” the official had said.

Section 71 (1) of the Electoral Act, 2022, gives INEC the liberty of up to 14 days after an election before issuing the winner with a return certificate.

The section reads, “A sealed certificate of return at an election in a prescribed form shall be issued within 14 days to every candidate who has been returned by the returning officer in an election under this Act”.