JUST IN: 6 killed as truck falls on taxi in Lagos

Six passengers lost their lives last Tuesday when a truck with unknown registration number fell on a fully loaded taxi in Lagos. The accident happened… 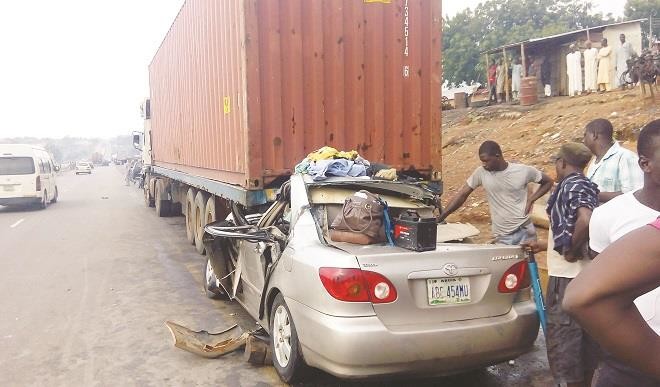 Six passengers lost their lives last Tuesday when a truck with unknown registration number fell on a fully loaded taxi in Lagos.

It was gathered that the OPEL car, with registration number SMK-312ES, was carrying seven passengers but six of them died in the process.

Director-General of LASEMA, Dr. Olufemi Oke-Osanyitolu, said: “Investigations revealed that a total of seven people were in the crushed car with six of them having lost their lives on or shortly after impact.”

The lone survivor reportedly trapped beneath the silo truck for hours.

It was learnt that LASEMA’s heavy duty equipment was deployed by the response team to extricate the single adult man identified as “Lekan” who survived the impact.

The remains of the other six passengers have been transported to the morgue, the agency confirmed.

Dr. Oke-Osanyitolu appealed to members of the public to comply with the social distancing guidelines of the state government.

“We also wish to appeal to members of the public to comply with the COVID-19 social distancing guidelines laid down by the Governor, Mr Babajide Olusola Sanwoolu, to avoid endangering themselves as well as the rescue workers who are already operating under extremely challenging conditions,” Oke-Osanyitolu said.

He added that recovery operation had been concluded, adding that the overturned truck has also been removed from obstructing the road.