It was jubilation in the ancient of Benin as Oba Ewuare II received  two of the artifacts, Cockerel and the bronze burst of an Oba,… 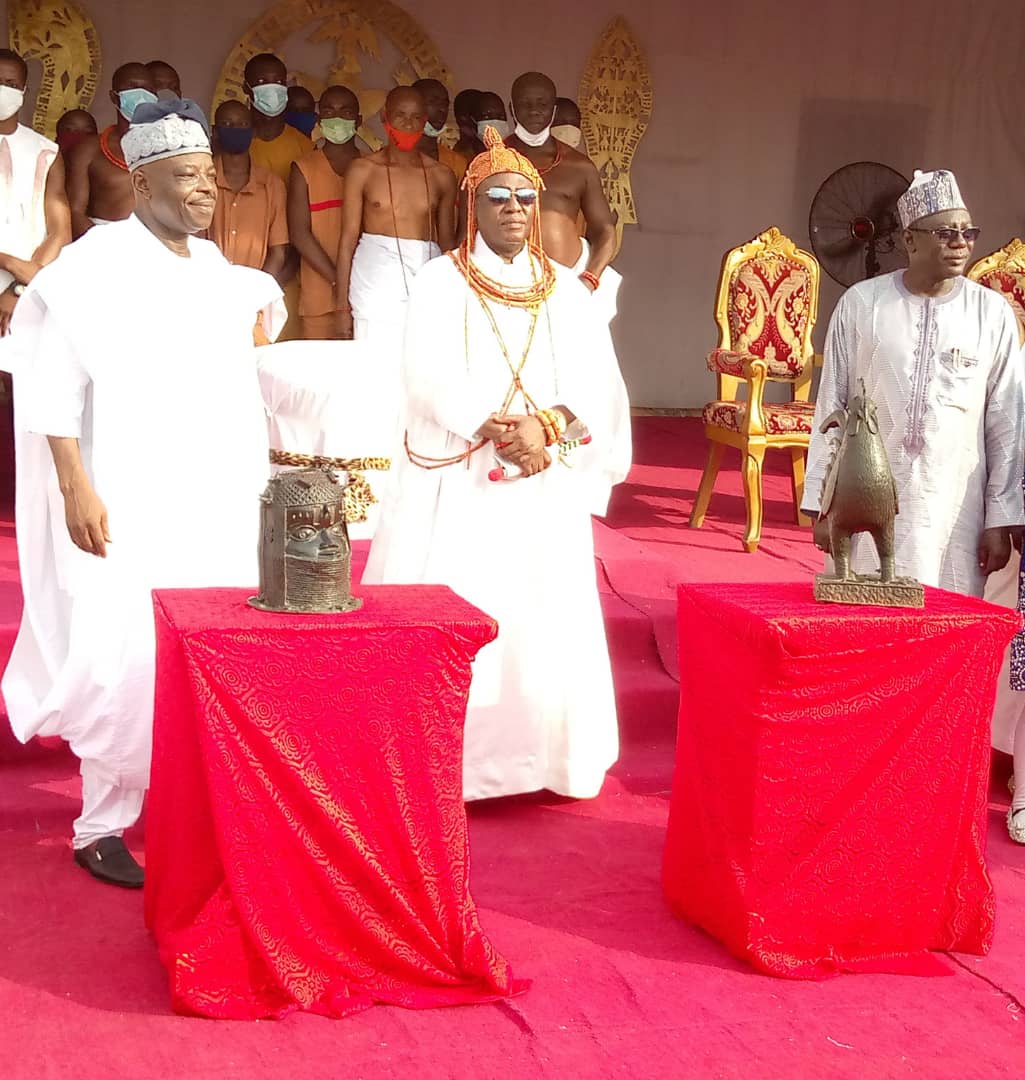 There was jubilation in the ancient city of Benin when Oba Ewuare II received  two of the artefacts – Cockerel and the bronze burst of an Oba – looted from Benin Kingdom during the 1897 British military expedition.

Speaking during the presentation,  Oba Ewuare II described the return as the  beginning of the restitution of the artefacts that were looted in 1897.

The monarch, who spoke through Prince Aghatise Eresiawa, said, “For us, our bronzes transcend mere art. They are mostly of religious significance to us and these two bronze pieces will return to where they rightly belong.”

“I will reiterate that the bronzes and other works that were looted from the Palace  must be returned here directly or through the agency of the Federal Government.”

While expressing appreciation to the president, who directed that the bronzes be handed to him directly, he  commended both Jesus College of Cambridge University and the University of Aberdeen for their pace-setting initiative in returning these two bronzes.

On his part, Amb. Sarafa Isola said history was being made as the artefacts were being returned to right the wrong of the past.

“My assignment here is to directly bring these objects to the Oba of Benin Kingdom. That is the presidential directive”

“Value has been added to these artefacts.  I am not aware of the value as at when it was taken away but as at today, the Cockerel is valued at £2million while the Oba’s head is valued and insured for £500,000 pounds.

“We will still see many of them come back and it is a great treasure for Benin kingdom and Nigeria.

The ambassador commended the British government for granting export licenses for the artefacts at no cost to Nigeria, hoping that more of the looted artworks would be returned.

Also speaking, Godwin Obaseki represented by his Chief of Staff, Monday Osaigbovo, pledged to support the palace in the return of the artifacts.

He said any institution willing to return the artifacts should liase with the palace.

Earlier, the Director-General, the Commission for Museums and Monuments (NCMM), Prof Abba Isa Tijani, said history had started taken its proper shape during the reign of Oba Ewuare, as the looted  artifacts started coming to their place of origin.

According to him, the artefacts are living arts, artefacts of the Benin people, as they were not produced for the sake of money or aesthetics, but part of their history, culture and daily life.