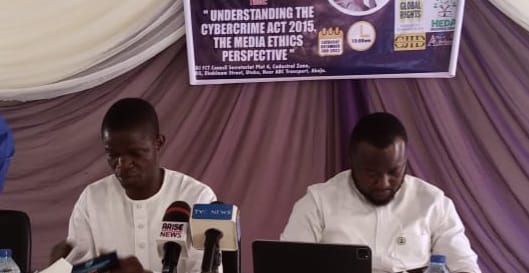 He spoke in Abuja on Saturday at the Nigeria Union of Journalists (NUJ) Correspondents’ Chapel end-of-year symposium, themed, ‘Understanding the Cybercrime Act2015, The Media ethics perspective’

“People in the local area listen more to local news, local programs, and more of the translated news report and as such, there’s a need for this organization to be more interested in what is going on at the grassroots level than the city.”

“If you go to some places in the local area, people are arrested by police and detained for days and they don’t get their liberty because they are not informed sufficiently of their rights.

“Apart from disseminating news, I believe very strongly that the work of journalists is to enlighten society to understand their roles in making a decent society,” he said.

Olajengbesi said journalists are crucial stakeholders in society by disseminating information noting that, “When they have access to certain information, they must endeavor to verify it before sending such information out.”

Chairman of Chapel, Comrade Jide Oyekunle, said the NUJ would do everything within its power to ensure that journalists adhere to the rules of reporting.

He said, “I want to assure you once again from this side that we will do everything within our power to ensure that our members adhere strictly to the ethics of the profession and also observe the extant laws regulating and guiding the operation of the media in Nigeria

“The Act was signed into law by former President Goodluck Jonathan in 2015 to tackle cyber fraud and boost the country’s digital economy but has been manipulated by the political class for their selfish interest in collaboration with the security agents to undermine and suppress press freedom.

“Nigeria Union of Journalists will be firm and resist any measure or action capable of threatening press freedom or infringing on the rights of any journalist in Nigeria, particularly Federal Capital Territory.

“We will continue to uphold and protect the fundamental objectives of the directive principles of the state policy as set out in Chapter 2 of the Constitution irrespective of the intimidation, harassment, persecution, and arrest.”