Salim Umar Ibrahim & Aminu Naganye, Kano   Karnaya is a village located a couple of kilometres away from Dutse, the Jigawa State capital. Ruqayya… 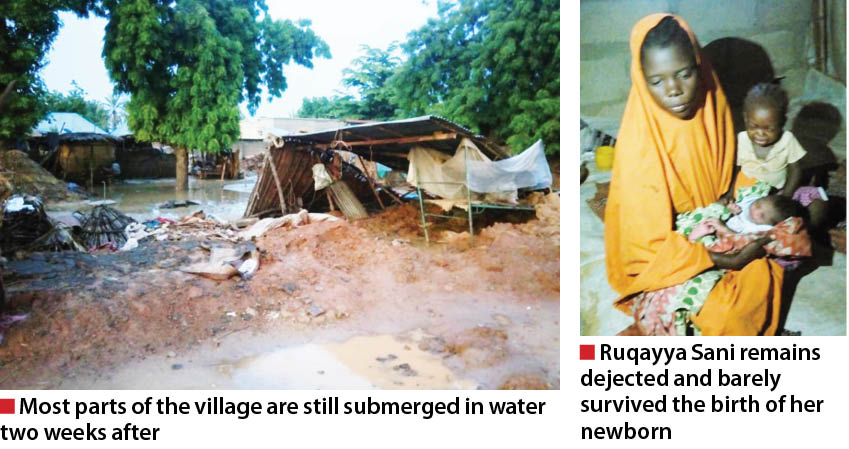 Karnaya is a village located a couple of kilometres away from Dutse, the Jigawa State capital.

Ruqayya was delivered of her newborn the midnight before Daily Trust Saturday visited the village on Tuesday. The birth of her new baby nearly ended her life, she said. She survived giving birth at a time when the only community primary health care facility in the village was submerged in water and there was no vehicle to convey her to a nearby hospital in Dutse.

Zuwaira Adamu, a community birth attendant who helped Ruqayya to successfully put to bed, described the experience as the most tragic she had seen in her life.

“I have never seen a situation like this. We were just sitting when the girl started complaining of stomach ache. Even the vehicle to convey us to Dutse at midnight wasn’t available. We stayed all night until labour fully started and she gave birth. There was nothing to use in assisting her to deliver the baby, not even a razor blade. It became a problem.

“We just managed in our own way to put her to bed. You can see her condition now. We are in a difficult situation. The community primary health care facility is submerged in water and there’s no access to the place,” Zuwaira said.

Daily Trust had reported how a heavy downpour on August 27 rendered hundreds of households in Karnaya village homeless.

It was gathered that more than half of the entire houses at Karnaya village were washed away by flood.

The over 24-hour rainfall, which led to a heavy flood, had forced villagers to seek refuge at the school in the village, as well as uncompleted buildings by the roadside.

When Daily Trust Saturday visited the village on Tuesday to see if help had come the way of the homeless villagers, it was observed that although some succour had come their way, many of them were still homeless and struggling to get daily meals.

One of the victims, Hamza Alhassan, narrated his ordeal thus, “The flood started on Saturday. It was around 7pm that we started to direct it to another channel but to no avail. We used more than 1,000 sacks filled with sand to control it, but we couldn’t.

“It started from my house. The complete house – five rooms, kitchen and toilet – went down. My family and I couldn’t take a single thing out of that house. We spent the whole night helpless.

“I have eight children. I am only left with my family members. The downpour continued for two days, non-stop. The houses that remained standing in the whole village are less than 10,” he narrated.

Another victim, Hauwa’u Umar said, “The situation we found ourselves in is really disturbing. All we can do is to surrender everything to the will of God, but we are really suffering.

“Water has washed away everything, including the crops planted by our husbands. Our village is entirely out of shape. We are squatting at the premises of schools and uncompleted buildings with our husbands and children. We really need help.”

Also speaking, an elderly member of the community who is also displaced, Alhassan Muhammad Liman, expressed grief over the flood incident.

He said, “God has tested the people of Karnaya village. For over 70 years of our history we have never experienced something like this.

“Our most pressing issue now is where to call home with our families. The situation is not favourable as you will see in-laws living in the same classroom with their married children.

“Some of us are here, some at the uncompleted radio building, some at filling stations and others in other uncompleted buildings.

“Some of our wives have relocated to their towns because we have nowhere to keep them now. Over 500 houses were destroyed while displaced people are uncountable.”

While the displaced households are still worried about how to rebuild their houses and resettle, they, however, appreciated the effort of philanthropists, concerned politicians and the State Emergency Management Agency (SEMA) in identifying with them and providing food items.

It was gathered that one of the philanthropists identified to be an Igbo man saw their plight on television and reached out to the community from the southern part of the country with a truck-load of bread.

The executive secretary, Jigawa State Emergency Management Agency (SEMA), Yusuf Sani Babura, who confirmed the situation, confirmed that the entire village had been ravaged, but added that they were working on how to provide shelter and food for the victims.

“The entire village is now down, but we are trying to get food and shelter for the victims. We are also working towards identifying their losses and see areas we can intervene,” he added.

Daily Trust Saturday reports that the victims are eagerly waiting for government’s intervention as soon as possible.