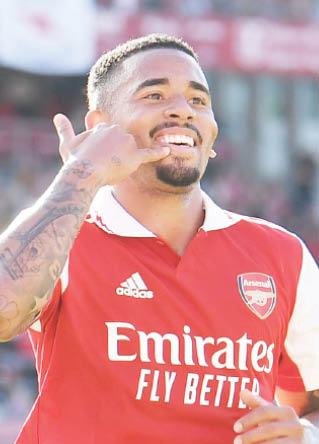 Gabriel Jesus scored a hat-trick on his first appearance at Emirates Stadium as Arsenal beat Sevilla 6-0 to win the Emirates Cup.

Bukayo Saka struck twice, with the Gunners 4-0 up inside 19 minutes against the La Liga side.

Eddie Nketiah rounded off the win after a flowing counter-attack move.

The Gunners’ victory ends a successful pre-season campaign, during which Brazilian Jesus scored seven goals after his £45m move from Manchester City.

It was Saka who opened the scoring from the penalty spot after he was brought down in the area, before Jesus doubled the hosts’ lead, firing home Granit Xhaka’s low cross.

He added a third just two minutes later, and Saka matched him before the 20-minute mark, pressing high and finishing well.

Xhaka went close to a fifth before Jesus grabbed his third from close range. Nketiah completed the scoring a minute from time.

Sevilla only had themselves to blame as they tried to play out from the back, but Arsenal’s expert pressing led to Bono gifting the ball straight to Saka who slotted it home with ease.

The Spanish side, who had the best defence in LaLiga last season, looked shell-shocked and while they did finally manage to stop the flow of relentless Arsenal attacks, they knew they had very little chance of getting back in to this pre-season friendly.

Now it is all eyes on next week Friday night for Arteta, as his side begin the Premier League season with a trip to Crystal Palace.