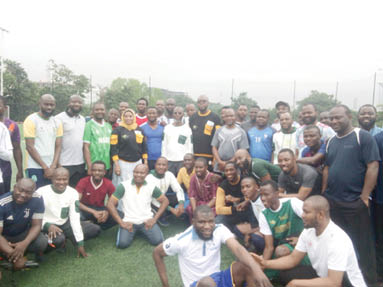 Jaiz Bank hosted a novelty football competition between former and current staff of the organisation at the Turf Arena Sports Centre, River Plate Park, Abuja on Saturday to celebrate its 10th anniversary.

Before the kick-off, the Managing Director, Hassan Usman explained the reason for the competition.

“As we all know, football is the most popular sport in the world and many of our staff love the game, so it is an opportunity for us to foster excellent interpersonal relationships among ourselves”.

The competition was a cagy one as two of the teams drew their three matches; the final group game between Ijarah and Musharaka proved to be the decider.

Ibrahim Ali sealed the game with a fantastic shot into the top corner, their opponents had an opportunity to equalize through a penalty but it hit the bar.

The first and second runner-up was decided in a penalty shootout between Team Qard Hassan and Team Sukuk as both picked up 3 points in the group. Qard Hassan won the shootout 5-4 while Musharaka came last after picking 2 points.

Team Ijarah grabbed all the awards as Ibrahim Ali emerged as the highest goal scorer, player of the tournament and goal of the tournament, fellow teammate and Chukwudi Enwerem was the best goalkeeper.