Is Nigeria self-sufficient in food production as claimed by President Buhari?

Claim: President Muhammadu Buhari in a tweet on Friday last week said Nigeria is achieving food security as a result of investments his administration has… 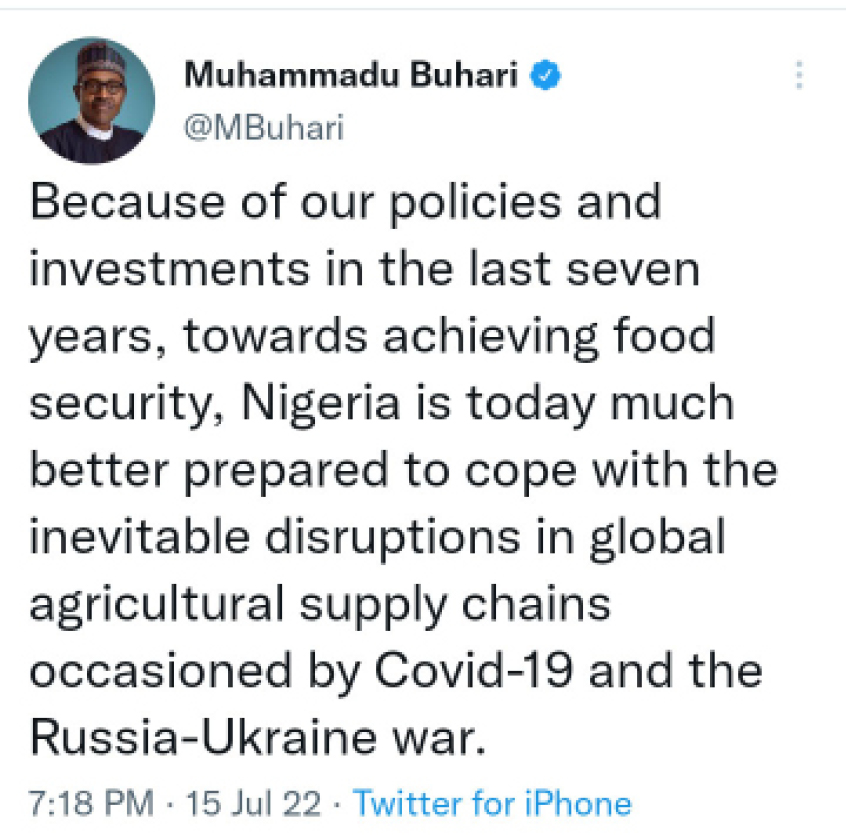 Claim: President Muhammadu Buhari in a tweet on Friday last week said Nigeria is achieving food security as a result of investments his administration has made to ensure that the country produces what it consumes.

The claim has so far generated thousands of reactions from Nigerians on different social media platforms, especially Twitter.

Full text: According to the tweet by President Buhari on his Twitter handle @MBuhari, he said “Because of our policies and investments in the last seven years towards achieving food security, Nigeria is today much better prepared to cope with the inevitable disruptions in global agricultural supply chains occasioned by COVID-19 and the Russian-Ukraine war.

Why the fuss about a Muslim-Muslim ticket?

“I said we must grow what we eat and eat what we grow. We have always been very conscious of the need to achieve food security in Nigeria and to encourage our local farmers and rural economies,” part of the president’s tweet said.

Verification: In verifying the claim by the president, Daily Trust analysed key factors that make a country self-sufficient in food production – a conducive and secured environment for agricultural activities, food inflation rate, as well as the volume of importation – but found out that the claim by the president does not tally with the current economic realities Nigeria is facing.

In a recent joint report by the World Food Programme (WFP) and the Food and Agricultural Organisation (FAO), both international bodies warned that acute food insecurity will likely worsen in Nigeria and 19 countries from June to Sept. 2022.

The report called for humanitarian action in 20 “Hunger Hotspots”, where some of its citizens will face hunger crises in the coming months.

According to the report obtained by Daily Trust, Ethiopia, Nigeria, South Sudan and Yemen remain on “highest alert” with catastrophic conditions.

The report added that “Organised violence, climate change, global and national economic disruption, and high food prices are expected to intensify hunger crises, displacement and migration and push millions to the rim in countries across the world in the outlook period from June to Sept. 2022.

According to the latest report by the Nigerian Bureau of Statistics (NBS) Nigeria’s inflation rose in June which is its highest in more than five years, occasioned by rising prices of food and the high cost of diesel.

The inflation rate surged to 18.60 per cent in June, up from 17.71 per cent in the previous month, the NBS made this known on Friday last week.

The rise in the food index was caused by increases in prices of bread and cereals, food products, potato, yam, and other tubers, meat, fish, oil and fat, and wine. On a month-on-month basis, the food sub-index increased to 2.05 per cent in June 2022, up by 0.03 per cent from 2.01 per cent recorded in May 2022.

Consequently, NBS said wheat production in Nigeria has crashed by 89.44 per cent, dropping from about 350,000 metric tons annually to as low as 36,943.8MT, the federal government has said.

Data from the latest report of Wheat Production Survey in Nigeria 2021, obtained from the NBS, showed that the 36,943.8MT was produced in 13 states.

Data also shows that overall production of wheat had been around 350,000MT since 2017, according to a report from the Federal Ministry of Agriculture and Rural Development.

However, in a significant drop in production, NBS in its Wheat Production Survey in Nigeria 2021, said the volume of wheat produced in 13 states across the country stood at 36,943.8MT, representing a significant drop of about 314,000 MT.

The apex statistics body said wheat production takes place majorly in 13 northern states and concluded that the crop was cultivated in an area of about 11,820 hectares with a production of 36,943.8MT of grain across the identified states.

Since the advent of banditry in the northern part of the country, farmers have found it difficult to access their farms, and in most cases, have to pay the bandits taxes before they can go to their farms.

The situation is gradually getting out of hand to the extent that the Zamfara State Government recently directed residents of the state to obtain guns in order to defend themselves against bandits ravaging the state.

The state’s commissioner for Information, Ibrahim Dosara, said the directive is part of measures to provide safety for the farmers in the state during this year’s planting and harvest season.

“Government is ready to facilitate people, especially our farmers, to secure basic weapons for defending themselves,” the Zamfara State government said.

Similarly, Benue State, North Central Nigeria, which prides itself on being the food basket of the nation, has had its own fair share of attacks by bandits and terrorists. In fact, the state governor, Samuel Ortom, while speaking with Arise Television recently, lamented that the killings have led to an increasing number of Internally Displaced Persons (IDPs), in the state.

In the same vein, a former managing director of Kaduna State Media Corporation (KSMC) and a community leader in Birnin-Gwari LGA of Kaduna State, Alhaji Zubairu Idris Abdulra’uf, said the farming communities in the council have in the last two years paid over N400 million as taxes to bandits to allow them farm and harvest their farm produce.

In a breakfast show interview on Channels Television monitored by Daily Trust, Abdulra’uf said the incessant attacks on his kinsmen had crippled economic activities in their rural communities and made travelling in the area difficult or even impossible in some places.

According to the community leader; “There are three stages to paying these taxes to these bandits. You have to pay pre-season and mid-season when the crops are about to start yielding. You will pay these bandits because they will not allow you to have access to your farm.

“Then, at the end of the season when you are harvesting, you will give these bandits money before you access your farm.

“And when you access your farm after paying these taxes, they will now tell you that apart from giving them money, you will give a ratio of two bags for every 10 bags of all the assorted grains you harvest.”

He said before the deterioration of security, Birnin-Gwari used to produce at least 700 metric tons of assorted grains, but now people cannot access their farms.

Also, there have been recent reports that bandits have renewed attacks on some farming communities in Shiroro, Rafi, Mariga, Mashegu, Rijau and parts of Magama LGAs of Niger State despite an alleged ceasefire early last month.

Food importation on the rise

Recent statistics from the Central Bank of Nigeria have revealed that Nigeria’s food import bill has risen to N1.1 trillion ($2.7bn) in 12 months, representing an increase of about 45 per cent.

In 2020, about $1.87bn was spent on food imports, however, the latest CBN data on sectoral utilization of foreign exchange showed that Nigeria spent $2.7 billion on food imports from January to December 2021, representing an increase of over $840 million.

Conclusion: Following verification by and reports released by national and international organisations on Nigeria’s food sufficiency, Daily Trust found that the claim by the president is FALSE.

This fact check is produced in  partnership with the Centre for Democracy and Development (CDD).