The Moroccans’ escapades in Qatar have so far sparked debates about identity, sports and politics that go well beyond the football pitch. Their Round of… 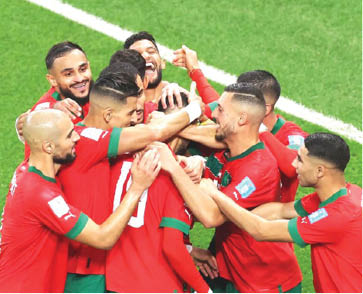 The Moroccans’ escapades in Qatar have so far sparked debates about identity, sports and politics that go well beyond the football pitch. Their Round of 16 match against Spain was tagged by some Arab journalists as an “Andalucian Derby”—in apparent reference to Muslims control of Spain for 300 years from the eighth to the 11th centuries. And when they won that game last week, celebrations erupted not only in Moroccan cities like Rabat, Casablanca and Marrakesh, but also in Gaza, Cairo, Algiers, Baghdad, Sana’a, Riyadh, and other cities in the Arab world. There were celebrations too in European cities like Paris, Turin, Madrid and London where Arabs and Muslims of all races live and work as sizable minorities.

And above all, there were joyous celebrations in Accra, Abidjan, Yaoundé, and elsewhere in Africa and among Africans in the diaspora. The Chairperson of the African Union and Senegalese President, Macky Sall, tweeted in support—as did, by the way, former Pakistani Prime Minister, Imran Khan, the Ugandan musician and politician, Bobi Wine, and incredibly, the Israeli defence minister, Benny Gantz who said “Congratulations to our Moroccan friends”, among many others around the world.

Identity and politics run through all these outpourings of joy ignited by just two victories by a North African team in a global sporting event. In one sense, the Moroccan victories represent a middle finger to Europe particularly, and “the West” more broadly by the Arab and Muslim worlds who have been, and more importantly feel themselves to have been, at the receiving end of irresponsible Western military, political and cultural power for centuries, but especially over the past few decades. In this sense, the successive defeat of Belgium, Spain and Portugal on a football pitch by just one Arab and Muslim country is a way of talking back, of wiping off centuries of cultural and political humiliation—perceived or real—at the hands of Europe and the West.

Furthermore, the Moroccan victories and the celebrations that have followed are also pointedly political: a mechanism for expressing political solidarity with the Palestinians, and of unity among Arabs and Muslims all around the world. Arab leaders, much vilified during the day, but courted at night by western leaders have also strategically joined in on the moment to reconnect themselves to their peoples and for once, show unity on a cultural field, if they cannot do so on the political battleground. The Moroccan players have adroitly demonstrated all these, by chanting Arab songs, by making the sujud—the Muslim prostration during prayer—and by flying Palestinian flags. And the political and cultural message is clear: We are not terrorists but people; partakers of world culture like everyone else.

But if three games of football have sought to redefine what it means to be an Arab or Muslim in the 21st century, it also seeks to do the same for what it means to be African. Morocco’s achievements in Qatar so far, by chance or design, have rekindled the old debate about who is African, and particularly the silent but still everywhere evident question of whether Noth Africa is “Africa” is enough.

Nothing underscores this latter question better than the label “Sub-Saharan Africa”. As a term, ‘Sub-Saharan Africa’ is a marker not really of geographical space, but of cultural and political difference. Without “North Africa” to contrast it with, it becomes meaningless. And “North Africa” itself does not have the same apolitical ring to it like West Africa or East Africa. “North Africa” is a term used to denote a sub region that is geographically located in one place, but more culturally and politically located at another in the way that East Africa, Southern Africa, and West Africa all are not. These demarcations have been imposed from outside of Africa, of course, but they have also been internalised at home, if somewhat awkwardly.

In short, then, Morocco, Tunisia, Egypt, and Algeria, and to a much lesser extent Sudan, have often been thought of as not African enough, by themselves, by other Africans, and by much of the rest of the world; hence the marker, MENA (Middle East and North Africa) used in the international business world. But two victories on a football pitch have challenged that and perhaps point the way to a new era of African relations at home. Both of these strands of how North Africans are often identified, or identified themselves—as African and not African—were in display following the game against Portugal.

Sofiane Boufal, a Morocco national team player told international media that their win was for the Arab world. “Thanks to all Moroccans all over the world for their support, to all Arab people, and to all Muslim people,” Boufal said. But when asked by western journalists as to whether the Atlas Lions are playing for the Arab and Muslim worlds, their head coach, Walid Regragui was decisive in his reply. “I’m not here to be a politician, we represent Morocco and obviously Morocco and Moroccans are my priority. But obviously, we’re also African like Senegal, Ghana, Cameroon and Tunisia, so we hope to fly the flag of African football high”, he said. Boufal would later apologizes for his “error”, saying “I thank the entire continent of Africa for being there for us and I dedicate this win for each African country.”

All of these merely reflects the difficulty of defining who is an African, a difficulty that goes well beyond how North Africa and North Africans are situated within the continent. Are Whites in South Africa, Kenya, Zambia and elsewhere on the continent African? What about the Indians in Uganda and elsewhere in East Africa? Indeed, what about the Ethiopian or Algerian Jews? Are they African enough too? Are African Americans African? And if they are jot why call them so? If they are what do they have in common with say Libyans or even Ghanaians? What indeed, do African Americans or Haitians have in common with White South Africans? What about Sudan and Somalia? Are they as much African as Nigeria and Togo?

The questions are endless because the idea of who is an ‘African’ has never really been resolved conclusively one way or another. Even the late Kenyan political scientist, Professor Ali Mazrui’s idea of Africa being home to a “triple heritage” of traditional African culture, Islam and European Christianity and Modernity would not do because no one in Africa shares all three identities at once. The question of who is an African has been difficult to answer in part Africa is unlike any other continent.

Africa is the most diverse of all continents by every conceivable measure. Geographically, desert plains are as much visible as forests everywhere in Africa. Biologically, Africans have the most diverse physical and genetic variations of all humans in the world. African languages and cultures are also wildly different, not just within the same continent, but often, within the same country. All of these make race, ethnicity and even history and culture impossible categories for defining who is an African.

But perhaps there is a sense in which this World Cup in Qatar has helped resolved some of these questions. At least, it has opened a small window through which north Africans can represent themselves as Africans with pride, regardless of their shared culture and history with Arabs in the Middle East. It has also made other Africans, from Ghana to Uganda, look to them as fellow Africans with pride in a way that few events in recent memory have done. You only wish African leaders can seize the moment and build on it as the world heads into an uncertain future.