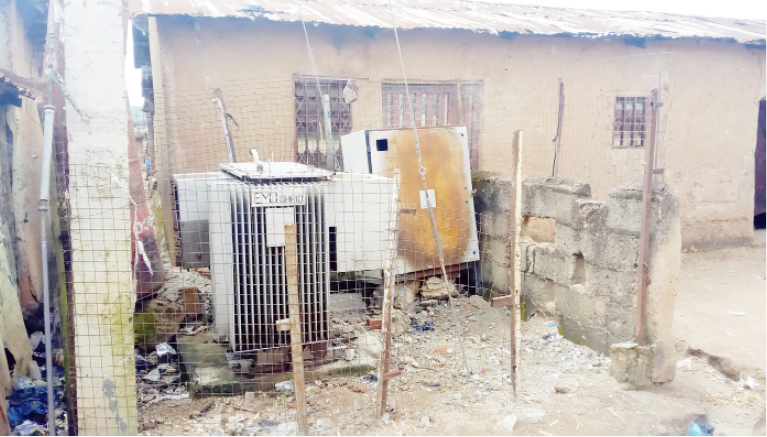 Six years ago, the Federal Government unbundled the Power Holding Company of Nigerian (PHCN) and handed over 18 utility firms to private investors. Government raked in $2.5 billion (about N916.575bn) from the transaction involving six Generation Companies (GenCos) and 11 Distribution Companies (DisCos).

In spite of the $1.4 trillion the DisCos said they have invested since 2013, electricity consumers are expressing dissatisfaction, poor supply and outrageous bills even as they bought transformers, cables, and even meters.

A Consumer Rights and Obligations Regulation document obtained from NERC indicates that the rights are enshrined in the Electric Power Sector Reform Act (EPSRA), 2005.

The content of the regulation places the responsibility of buying, replacing or repairing electricity transformers, poles and related equipment used in the supply of electricity on the 11 DisCos operating in Nigeria, and not on consumers.

However,  Daily Trust investigation in about 30 communities served by seven of the DisCos across eight states shows that many DisCos have not complied with the regulation.

In Kaduna metropolis, where Kaduna Electric has its headquarters, our reporters surveyed the service conditions in some communities.

Residents of Kwanar Almajirai at Hayin Dan Mani in the Rigasa District of Kaduna are tired of contributing to fixing their transformers anytime a fault occurred.

The transformer was faulty recently and the residents had to tax themselves again, N11,500 and above each, to buy a new transformer. A resident, Abdullahi Adamu, said the community had been without electricity for the past two years because each time they fixed it, the transformer went bad again.

Asked if the residents formally reported the fault to Kaduna Electric officials, Adamu said, “They are aware but they are not helping matters because each time we informed them they will ask us to be patient.”

In Dan Mani area of Kaduna town, Malam Usman Idris who lives on Muhammadu Buhari Way, adjacent Yazifa Street said: “We agreed to contribute N25,000 because the electricity company is not helping matters to repair our transformer.”

Sadly, Idris said officials of Kaduna Electric gave approval for the community to contribute to the fund.

Five other streets in the community suffered a similar fate, it was discovered.

In Ikeja area of Lagos State, Bamidele Ogunwusi who leaves along College Road, Ifako, under Ikeja Electric, said the officials have asked residents of the area to be prepared to pay for transformer replacement after their 50KVA pole-mounted device went bad.

“When we approached the Ikeja Electric officials, they said if they cannot fix the spoilt 50KVA transformer, we should be ready to contribute money for a new transformer which will cost us about N1 million.”

Mr. Anthony Chukwu, a businessman at Akesan Igando, in Alimosho LGA, said residents were asked by Ikeja DisCo officials to pay N10,000 each to replace a faulty 500KVA transformer.

In Appma, house owners said they paid between N50,000‎ and N70,000 each to the electricity committee to get connected to the two community transformers that were bought by residents in 2012.

Mr Bulus Audu said: “The most worrisome ‎of the situation is that, the payment continues even after the initial payment of N50,000 or N70,000. They said the about N4,000 to N8,000 is for unending transformer oil, coil or maintenance, while AEDC officials would come to also collect their bills from us at month end.”

In Dutse Alhaji area of Abuja still under AEDC, private 33 kilovolts (KV) transformers flood the network, just as in Kubwa and other parts of the FCT.

At Dutse Zone 4 a resident said to have bought a pole-mounting transformer collects N100,000 from residents to connect them. During the survey, it was observed that the practice is everywhere – in Masaka, New Nyanya, Ado, and Mararaba settlements in Nasarawa State and Kurudu, Karu, Nyanya, Sokale, Bwari towns in the FCT.

Malam Ladan Musa is a resident of Sangere, along Numan Road in Yola. The community transformer broke down for three months without being fixed by Yola DisCo. The community had to raise N300,000 to fix an earlier fault.

At Jambutu area in Yola, the substation was severally submerged during this rainy season, causing the electricity company to shut down supply whenever it rained.

“We live in perpetual panic as we fear possible electrocution when the substation gets flooded. The DisCo has not done much to arrest the situation,” resident Bello Kundi said.

A vigilante group leader, Ojo Johnson, decried frequent cable theft and other vandalisation at Jimeta metropolis of Yola. He said in some areas, residents contributed money to form local guards to protect transformers.

Some Enugu communities have more constant outages than power supply. The people of Owerre Umabor Community, in Eha-Alumonah, Nsukka LGA of the state said they have not seen electricity for two years.

A community leader, Comrade Emmanuel Ugwueze, said their faulty transformer was taken away by officials of Enugu DisCo for repair in 2017. “The DisCo made several promises concerning the power failure, but did not “keep even one promise.”

At Nsukka town of Enugu, residents also pay to fix their transformers and buy cables too. Obinna Okafor said in spite of these sacrifices, “We are faced with huge estimated billing and if you don’t pay, they will cut off the supply.”

Epileptic supply with shabby networks rocks Obolo Afor, Enugu State. Friday Okwudiri, a furniture dealer said the cost of making chairs and beds was rising as they depended more on generators at the furniture market.

In Edo State the power situation is at its lowest ebb as the majority of residents hardly get six hours of electricity from the Benin Electricity Distribution Company (BEDC).

There are areas in Benin that have been without electricity for months. Those having electricity in Benin are the supper rich companies which can afford to pay between N200,000 and above N1 million, it was learnt.

Osazee Edigin, a public relations officer of Edo State Civil Society Organisation lamented poor services of BEDC.  “Business activities have crumbled due to power outages and our youths are migrating,” he said.

A survey of communities in Kumbotso, Tarauni, Gwale and parts of Nasarawa LGA in Kano showed that residents contribute money to buy and repair faulty transformers.

Most residents claim the DisCo often took time to clear faults, leaving them in darkness for weeks or months.

At Tudun Yola quarters, Gwale LGA, Daily Trust found that residents bought the operational transformer. The Secretary, Tudun Yola Community Development Association, Alhaji Ali Tamasi Mu’az, said they had to buy another when the first one got damaged, but they suffered blackout for two months.

In Plateau State, residents of Agingi community and Akak Achahu have their power supply rationed. When their transformers went bad, they raised money but couldn’t get Jos DisCo to fix them or even return the faulty transformers.

The Village Head, Akak Achahu, said they had to task each house N2, 000 to raise the money and that they have the records of the monies collected and paid.

The Head, Corporate Communications at Kaduna Electric, Abdul’azeez Abdullahi said nobody asked people to pay or contribute money to replace or fix their faulty transformers. He said the DisCo preferred that customers offset their bills promptly so that such transformers serving them can be fixed when faulty.

“We never asked people to contribute money to fix or buy transformer. They don’t want to pay bills rather, when their transformers get spoiled they will be running helter-skelter to fix it. Nobody says they should fix transformer; let them pay their debts which was what we expect from them,” Abdullahi explained.

The Acting Head, Communication at Jos DisCo, Saratu Aliyu, said the DisCo did not encourage any community to pay money for transformers. He said if any community wants to be part of facilitating the process of getting a transformer, they should discuss formally and follow procedures.

For the two communities that paid to DisCo’s officials and did not get transformers, Aliyu assured of probing the cases.

The General Manager, Public Affairs Division at NERC, Dr. Usman Abba-Arabi, in a response to our inquiries, referred to NERC Order to the affected DisCos on canceling their licences in 60 days since October 2019.

Arabi said: “The orders that we gave to the DisCos encompass everything including their performance improvement, the issue of customer enumeration, and customer care. They are all in there. Whatever they submit, we will take to FIRS and to CBN to verify before taking decisions.”

On the implication of canceling the licences, the NERC spokesman said: “The deadline given to the DisCos to provide responses was 60 days (elapsed on December 7, 2019), and that it would be unfair to preempt the outcome.

“When the DisCos submit their responses, NERC will look at them and then know what to do,” the GM, Public Affairs stated.