Intrigues as race for next Och’Idoma heightens

Two months ago, news filtered in that the paramount ruler of Idoma people in Benue State, the Och’idoma IV, Agabaidu Elias Ikoyi Obekpa, had embarked… 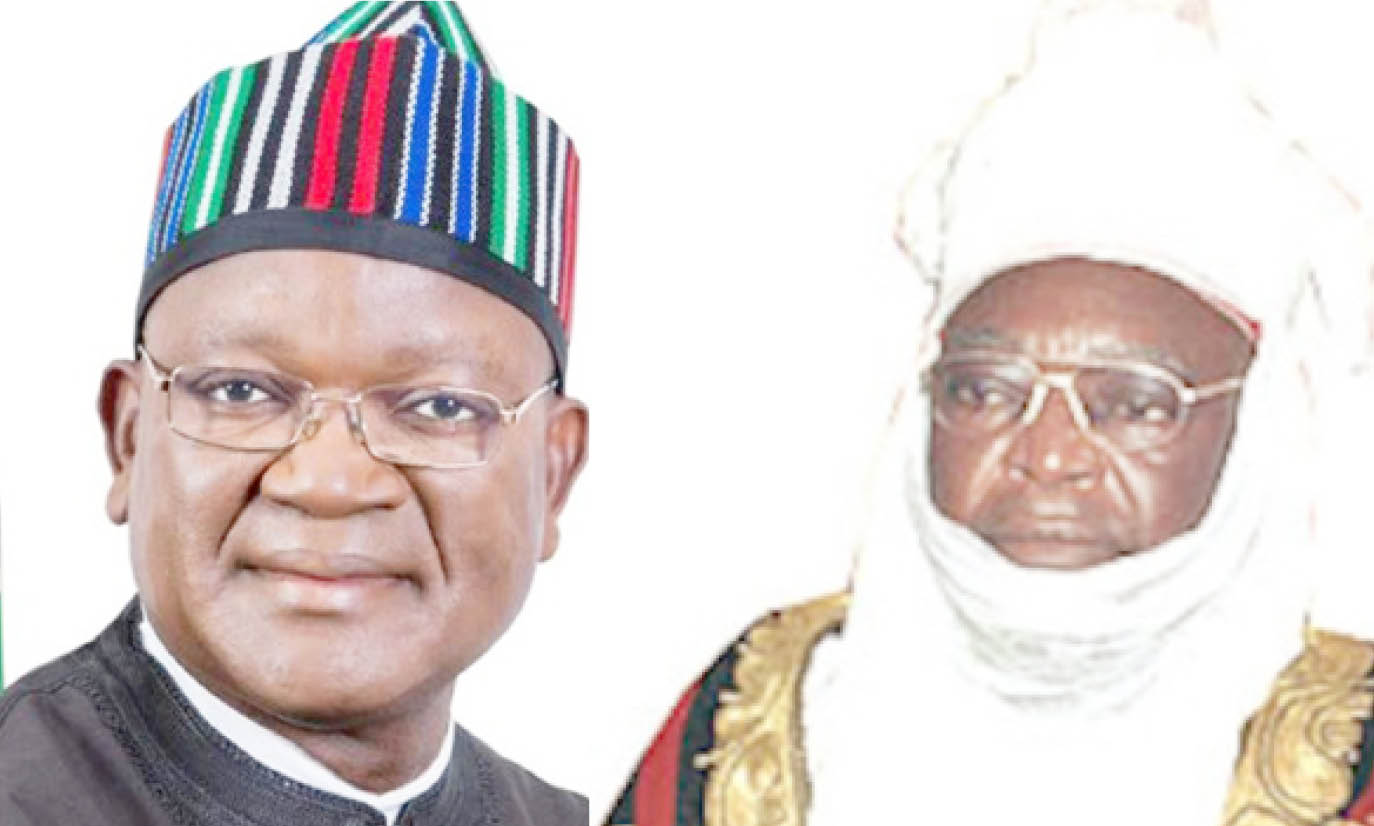 Two months ago, news filtered in that the paramount ruler of Idoma people in Benue State, the Och’idoma IV, Agabaidu Elias Ikoyi Obekpa, had embarked on a ‘hunting expedition.’

Until now, a royal father’s ‘hunting expedition,’ which euphemistically means that he has joined his ancestors, was never officially announced by the Idoma Area Traditional Council (IATC).

But a statement signed by the permanent secretary of the state Ministry of Information, Culture and Tourism, Adam Idu, a week after the news broke, gave credence to the development, which also led to the appointment of an acting Och’Idoma by the state governor.

To further buttress the news that the monarch had actually gone on ‘expedition’, the Nasarawa chiefdom, about two weeks later, visited the state to condole with Governor Samuel Ortom and his people.

On November 14, 2021, the governor paid a condolence visit to the acting Och’Idoma, George Edeh, an engineer, and the entire IATC in Otukpo.

He had assured the Idoma people during the visit that the selection of the next Och’Idoma would be done transparently.  He noted that a meeting of stakeholders would be convened to kick-start the selection process, which would strictly adhere to the laws guiding the procedure.

The governor also pledged the support of his administration to the acting Och’Idoma and for a hitch-free succession process. He also visited the family of Chief Obekpa, where he also pledged his support as an adopted son in the family.

Also, the Tor Tiv, who is the chairman of the Benue State Council of Traditional Rulers, Prof James Ayatse, visited the Idoma Kingdom in Otukpo and expressed sympathy, saying the Och’Idoma left a huge legacy of positive contributions.

Ayatse, who was accompanied by first class chiefs that make up the Benue State Council of Traditional Rulers, noted that the entire Idoma Kingdom and Benue State would continue to celebrate the late Och’Idoma as a selfless father and traditional ruler who ensured a cordial working relationship between Idoma and other ethnic groups in the state.

The state government has initiated at least two stakeholders’ meetings at the Government House in recent times to commence the process of filling the vacant royal stool.

Recall that after the establishment of the stool in 1947, Agabaidu Ogiri Oko became the first Och’Idoma to mount the throne between 1947 and 1960.

He was succeeded by  Agabaidu Ajene Okpabi,  who reigned between 1960 and 1995, while  Agabaidu Edwin Ogbu took over as Och’Idoma III between January 10, 1996 and April 1996. It was after his demise that the deceased Ochi’Idoma Dr Elias Obekpa IV ascended the exalted seat on December 7, 1996.

The late Ajene Okpabi was the longest serving Och’Idoma.  Having hailed from the Igede-speaking Oju/Obi intermediary zone, traditionalists are now of the opinion that the stool should be zoned to the areas that haven’t tasted the throne in line with the rotational principle of kingship in the land.

This idea is also supported by the 2016 amended chieftaincy law of the state, which recognises the rotational principle guiding the selection of the Idoma monarchy.

Already, the Benue State Government has set December 30, 2021 for the selection of a new Och’Idoma and chairman of the Idoma Tradition Council to replace Obekpa.

Governor Ortom had announced during the latest meeting with stakeholders from the Benue South senatorial district (Idoma zone) at the Government House in Makurdi that the new date was arrived at in line with the amended Benue State Chieftaincy Law (2016), which stipulates that a new paramount ruler should be selected three months after the demise of the previous one.

He directed the Idoma people to convene a meeting of all stakeholders on December 15, 2021, which should be attended by all, irrespective of party affiliations, to discuss and determine a suitable replacement for the late Och’Idoma.

Ortom, however, noted that where a consensus arrangement failed, the kingmakers would go into a transparent process to vote among the contending candidates.

The special adviser to the governor on local government and chieftaincy affairs, Kenneth Achabo, who read part of the chieftaincy law to give a guide to the selection process during the meeting, said the Och’Idoma would be selected on rotational basis.

Achabo said the candidate to be considered for the stool must be an Idoma or Igede by descent and must not be less than 40 years, must be physically and mentally fit and be conversant with Idoma or Igede culture.  Also, he must not have been convicted of any criminal offence at any time.

However, there have been contrary views among the people. Some argue that part of the amended law does not reflect the culture, tradition and custom of Idoma people. For instance, the traditional head of Otukpo district, Ad’Otukpo, Chief John Eyimonye, in a recent interview aired on Apa Television, faulted certain aspects of the law, which in his estimation, seems to be a deviation from the culture of Idoma people.

He posited that the process implored by the state House of Assembly during the amendment of the law in 2016 was largely based on the voting power of the majority (many of the voters not Idoma), which does not reflect their (Idoma) contributions at the public hearing where such inputs were earlier adopted.

He also said that nothing had been done traditionally to mourn the passing of Och’Idoma while the state government had gone ahead to fix a date for the selection of a new one.

Eyimonye explained that ordinarily, the move to install the successor of Obekpa should have followed after three years of traditional mourning by his children, with the full participation of the 22 district heads of Idoma Kingdom, who are the legendary kingmakers created by the colonial masters.

However, the governor has called on the people to identify the grey areas for future amendment of the chieftaincy law of the state, which many have claimed was hurriedly passed by the past House of Assembly.

A professor of History in the Benue State University (BSU), Armstrong Adejo, said the hunting expedition embarked upon by the Och’Idoma was a perpetual exercise, which dates back to the olden days, adding, “We are even gradually losing the real grab of the implications of the tradition.”

On whether the law is in conflict with the tradition of the people, Adejo said,

“That law technically has so many angles that are in conflict with the tradition of Idoma people. At a recent stakeholders meeting, the governor himself acknowledged that people had raised issues about the law, including the hunting expedition. But he is now saying that those issues should be put together by the people so that the normal legislative amendment will be possible.

The professor of history, who has also indicated interest in the throne, further explained that the law existed on a rotational basis.

Meanwhile, an Idoma indigene who simply identified himself as Adakole, said the next king would emerge based on the age-long zoning formula of the people.

He, however, said the chieftaincy law was not all that bad, as part of it is in tandem with the Idoma cultural practice, which allows any of its illustrious sons from the benefitting zone to become an Och’Idoma, whether he is a serving chief or not, as long as he is one of the people.

The Idoma-speaking area of Benue South comprises nine local government areas, from where some people are said to have started showing interest, including the first class chief of Apa/Agatu, Chief Baba Odangala, Major-General, Lawrence Onoja (retd), of the Ohimini stock; Professor Adejo; Ad’agatu, Chief Godwin Onah and others.