Inside the Sultan’s palace 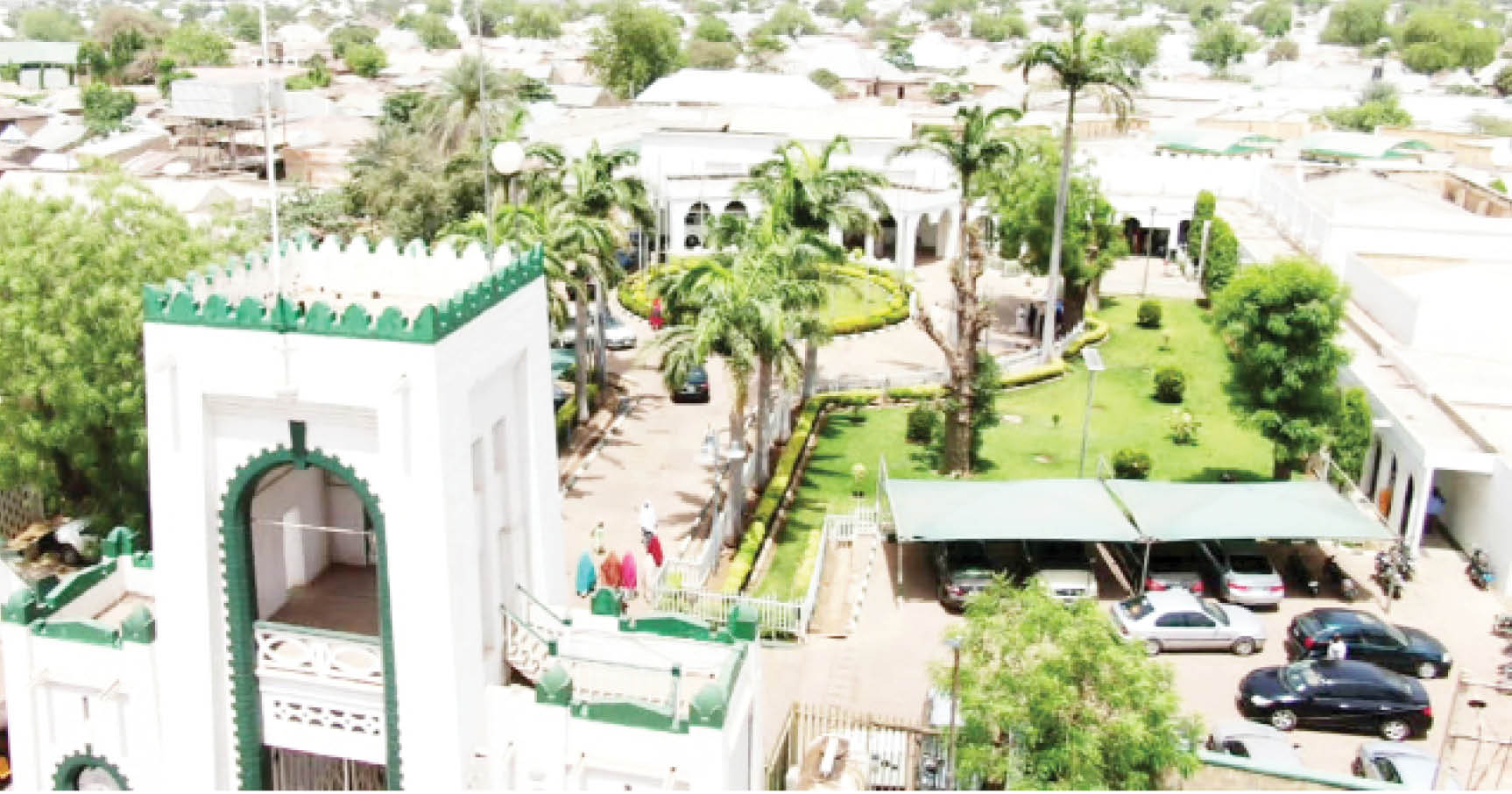 Palace of the Sultan of Sokoto

Daily Trust on Sunday had rare access into the physical and historical recesses of the palace of the Sultan of Sokoto and reports on the significance of the cultural and architectural edifice.

In front of the palace of the Sultan of Sokoto, there is a large white tower. It is visible from a distance and seems to beckon to the visitor. From its highest point, a green flag flutters. Green and white colours blend beautifully in the sunshine. If the flag is raised, it means the Sultan is within the palace, and a visitor may then seek to have an audience with him. If the flag has not been raised, this suggests that the Sultan may have travelled.

The symbolism behind the flag is a sign most people in the ancient city are familiar with and understand. This is replicated in all the emirates, which make up what was once the Sokoto Caliphate. Sokoto is also known as Birnin Shehu, a reference to Shehu Usman Dan Fodio, the famous Fulani cleric who built it.

The palace of the Sultan is 214 years old. It was built in 1808 by Mohammed Bello, son of Usman Dan Fodio, the founder of the caliphate.

It is the residence of the Sultan of Sokoto, the spiritual ruler of the Sokoto Caliphate.

Mohammed Bello was the first Sultan of Sokoto. His father, Usman Dan Fodio, never used the title of Sultan, but was known as Amir al Muminin.

A palace official who acts as our guide said, “Shehu Usman Dan Fodio ruled between 1804 and 1817. The palace has existed from then, right up to the present.”

There were no smart phones, cars, laptops or air-conditioning systems in Sokoto at the time when the palace was built and the caliphate came into being. The palace has transformed over time, flowing with intellectual, scientific and technological developments of different eras.

Evidence of this can be drawn from the 19th century Sokoto. Many will remember how Clapperton was stunned at Muhammed Bello’s knowledge of Christianity and developments in Europe when the former visited Sokoto in the 19th century.

The ideas of Usman Dan Fodio, his son Muhammadu bello, and brother Abdullahi Dan Fodio, still remain as valid as they were 200 years ago, continually shaping life and society.

The current Sultan is the 20th in the line of Sultans.

Just outside the palace is the Sultan Bello mosque, and further down the road is the Hubbare or tomb of Usman Dan Fodio. In Sokoto, several religious and historical structures lie close to each other, attracting crowds from many parts of Nigeria, and even beyond. Sokoto is rich in sites, which a tourist would do well to visit if he travels there. One writer describes the Sultan’s palace as being ‘very rich in ancient architecture but with modern improvements.’

The palace official added as we stand before a framed version of the family tree, “Usman Dan Fodio is the founder of the Sokoto Caliphate, but Mohammed Bello is the first Sultan. This is the family tree. It contains the names of Sultans. Each name contains a number. All the names with numbers are the ones that held the position of Sultan. Usman Dan Fodio is the one who fought for, established and built the caliphate. He is always termed as the first Sultan, but he was not here as a Sultan.”

The family tree is very important for anybody keen on understanding the story and lineage of the Fodio’s.

Once you go past the gates of the palace, you immediately come across a series of linked gardens, which are surprisingly quite green and beautiful at this time of the year. A series of small fences run around the gardens, protecting the plants and flowers and allowing them to flourish.

There are hoses close to the plants drawing water from the nearby taps. People pass by the gardens to enter the palace proper. The Dogarai or palace guards, can be seen not too far off. Their yellow and red uniforms add to the colours within the palace. Titled men in turbans and flowing gowns also add some colour to the palace.

Visitors to the palace wishing to have audience with the Sultan are asked to wait for a while in a room, which has a lot of history within it. The room is fully air-conditioned and it is a nice place to sit and wait, for there is so much history around. The room encourages the visitor to pause and reflect on many things. It was truly a brilliant idea to create such a room where history seems to infect everyone positively every hour.

Many historical photos have been framed and grace the walls. The photos capture memorable times in the history of the palace. Some reveal the Sultan’s late father, Sultan Siddique Abubakar III, alongside a few others.

There are photographs of the current Sultan as a schoolboy and young army officer. Photographs of visitors to Sokoto as well as to the palace are numerous. An earlier Eze Igbo of Sokoto is seen, including that of the current Oba of Benin, and many other photos of visiting personalities.

Very soon, we were ushered before Alhaji Muhammad Sa’ad Abubakar III, the Sultan of Sokoto, and members of the Sultanate Council were present, sitting to the right of the Sultan.

A number of historical and religious objects hang on the walls. One of these is the Holy Qur’an, which is kept in a bag made for the purpose. There is a well decorated sword too, hanging on the wall. Very soon, after some pleasantries, we were done and taken to other parts of the palace by the guide.

There are different chambers in the palace, which have a variety of purposes or functions. Some are for receiving the president of Nigeria whenever he visits the Sultan. Others are for receiving governors, ambassadors or other categories of guests. The rooms are neat and well taken care of. A number of beautiful swords hang on the walls of one of the rooms.

“This is the main chamber, where presidents and first class emirs are received. When John Kerry, the former US secretary of state visited, he was received here. President Buhari was also received here when he visited,” the palace official said when we entered one of the chambers.

We moved to the next chamber, which, like the previous one, is neat,   welcoming and beautiful.

The palace official further said, “In ranking, this is the second chamber. Second class emirs, deputy governors and ambassadors are received here. Where you met the Sultan is the third chamber. That is where daily council meetings are held.”

We were also taken to a transparent cabinet, within which lies the flag of the Sultan recovered by the British at the battle of Burmi in 1903. The British took the flag to England and returned it to Sokoto at a later date.

The Sultanate Council intervenes in many issues to maintain harmony and bring peace to Sokoto. It can resolve feuds or disagreements and assist orphans to marry if they lacked the means.

“The council resolves many issues and disputes. It will intervene and resolve a dispute between a husband and wife if reported. If there are female orphans who wish to get married and cannot do so because of financial situation, they usually come here and report it. And the council will assign somebody from here who will go and find out if it is true or otherwise. If it is true, the council will intervene and finance the marriage,” our guide said.

“Mohammed Bello was the first Sultan. He was followed by Abubakar Atiku, the next one was Aliyu Babba, the sixth was Aliyu Karami, the seventh was Ahmed Rufai. The eighth was Abubakar II, the ninth was Sultan Mu’azu, and the eleventh was Umar Aliyu,” our guide further said.

At the front of the palace is a raised section. The guide mentioned that the Sultan sits there at important events, such as the various Islamic festivals. On such occasions, horsemen and other titled men ride up to the dais, either on well decorated horses or exquisitely attired camels, just as their forebears did with passion every year for the past 214 years.

Down the road, from the palace of the Sultan, is the Hubbare, a popular part of the city. It is the tomb of Usman Dan Fodio. A number of Sultans, including Mohammed Bello, Muhammadu Maccido, Aliyu Jedo, commander of the caliphate armed forces, as well as members of the royal family, are buried there. Nana Asmau, the famous poet, scholar and daughter of the Sheikh is buried there too.

Hubbare attracts pilgrims, tourists and persons with a sense of history, from both within and outside Nigeria. From many parts of northern Nigeria, pilgrims flock to Sokoto. During the various Eid celebrations, many pilgrims arrive at the tomb, having travelled from Chad, Cameroon, Niger Republic, and much further afield. They line the extensive walkways leading to the tomb. Then they wait for the special moment when they will be granted access to the Shehu’s tomb by Mai Bude Hubbare, the knowledgeable keeper of the Shehu’s tomb. Once granted entry, they remove their shoes, say a quiet prayer within and leave. It was a bit dark within the tomb on the day we visited.

Along the walls of the tomb are a number of quotations from the Holy Qur’an. People go to the Hubbare every day, but the great number of visits occur during the various Islamic festivals.

Alhaji Bala Ibrahim, the Mai Hubbare, an official who takes care of the Hubbare and provides a background to it said, “It was built by his son, Muhammadu Bello after the jihad based on a will by the Sheikh that a house and mosque would be built for him after his death.”

Once you pass the main entrance of the Hubbare, you suddenly see a round building, which is the Shehu’s school. Usman Dan Fodio taught many of his pupils at the school, which, like the Hubbare itself, is dated at well over 200 years.

After the school, the tomb of Usman Dan Fodio lies further down. It was a quiet day at the tomb, the visit occurring outside the festival season, thus there were just few visitors at the site.

Visitors go into the tomb and utter a few prayers. When they are done, they leave and another visitor enters.

“I will now show you emirs, grandchildren and descendants of Uthman Dan Fodio, who were buried in this Hubbare. But in this particular section, only Shehu Uthman and two of his sons, Muhammadu Sambo and Hassan lie,” Mai Hubbare said.

Mai Hubbare showed us a long line of tombs, within which lie a number of Sultans. Mai Hubbare, who is well built and composed, has an astonishing memory. His power of recall is impressive. Those buried in this section of the Hubbare include Abdurrahaman Suyudi, Imam Abubakar, Mai Fulani, son of Sarkin Musulmi Ahmad Rufa’I, Sultan Ahmad Atiku, Usmanu Mudangyal, Hadijatu, wife of Sultan Muhammadu Bello, and many others.

We were taken to the tomb of Nana Asmau, after which we crossed to a wide open field, where numerous members of the royal family were buried. This is the end of the tour of the Hubbare, the final abode for many Sultans and members of the Sokoto royal family.