Inside story of Kano woman who murdered her two children

Hauwa’u Habibu went berserk and hacked her two children to death before fleeing her home in Kano. While rumours said she did it to protest… 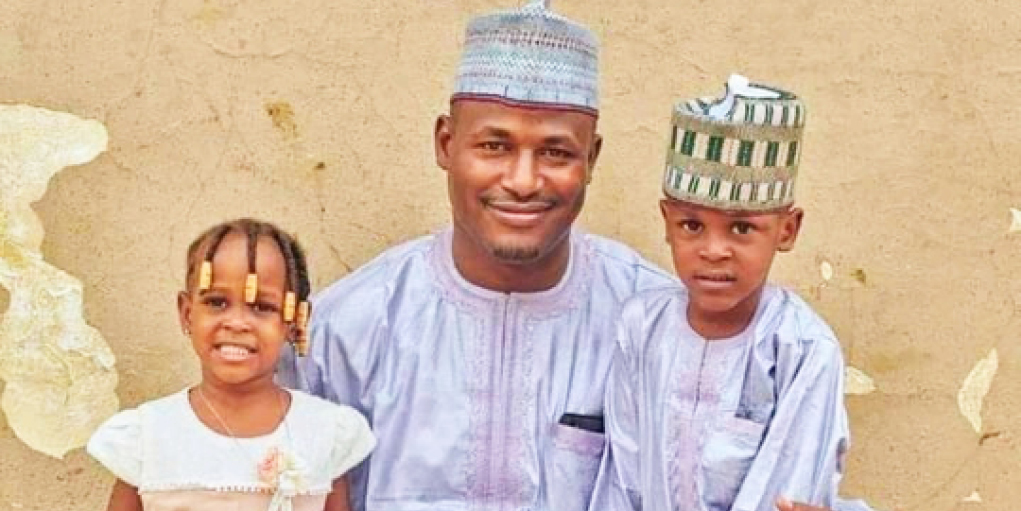 the Husband, Ibrahim and the deceased children, Irfan and Zuhura

Hauwa’u Habibu went berserk and hacked her two children to death before fleeing her home in Kano.

While rumours said she did it to protest her husband’s decision to take a second wife, Hauwa’u and witnesses’ accounts suggest she might have been suffering from hallucinations as Daily Trust reports.

Diso community in Gwale LGA of Kano State was thrown into pandemonium Saturday when news broke that one Hauwa’u Habibu, a health worker with Dala LGA, had killed her two children, Irfan Ibrahim, 6, and Zuhura Ibrahim, 3. She also injured her niece, Aisha Sadiq, 10, in a vicious attack.

Already, the suspect, Hauwa’u, who fled after committing the offence, has been arrested by the police less than 24 hours after the incidence.

The spokesman of the state police command, DSP Abdullahi Haruna said a team of detectives immediately rushed to the scene and took the victims to Murtala Mohammed Specialist Hospital, Kano, where a medical doctor confirmed the two children dead.

Aisha Sadiq was transferred to Aminu Kano Teaching Hospital, where she was treated and discharged.

On preliminary investigations, the suspect confessed to have locked up their house, used a machete and an aluminium made pestle to attack the three children, causing severe injuries on different parts of their bodies.

The police also released some audio of the preliminary interviews conducted by them with some of the principal actors in the incidence.

The prime suspect, Hauwa’u Habibu in the interview said, “What I can only recall was seeing my husband in blood-soaked clothes taking me to my parents’ house asking them to keep me there. Most of the times I used to feel somehow and of recent, I used to experience hallucinations and I told him about that,” she said.

On what happened on the day of the incidence, Hauwa’u said, “I saw my children coming towards me as if we are fighting. They came towards me with something like a knife. I have told my husband before that he comes to me in different forms and shapes. Sometimes, he comes with hooves, carrying things around his body. He never listened to me. I just left for my mother’s home, who didn’t like his new marriage as well,” she said.

She insists that she does not know the cause of her fight with the children nor what she did to them.

“They came after me with a knife. I just left for my mother’s house,” she said.

Her husband and father of the children, Ibrahim Haruna Aminu, said, “She called me in the morning at about 9:55 am telling me that two women and a man have come to the house to kill her. I asked her who is with her and the children and she told me it was the children who were coming to kill her. I told her to keep praying.

“A day before she was behaving abnormally. I asked her to keep praying and will come over as soon as the rain subsides. After about five minutes, she called again and handed over the phone to the children who asked me for Bobo drinks and I asked them to pick one each from my room. She ended the call.”

At that moment, he started towards his house but his car broke down along the way. He called a friend who helped tow his car to the mechanic before he proceeded home.

“Upon arriving, I went in to greet my parents and tried to open the house which was locked and had to use my keys. It was upon entering that I saw their corpses and one injured,” he said.

It was the surviving child, Aisha, who told him that they were attacked by her aunt, Hauwa’u, who then locked up the house and left.

“I went to inform my family who came to evacuate the deceased and the injured to the hospital,” he said.

He then went to his in-law’s house where he met his wife talking with her mother.

“I told her what happened and she broke into tears and my wife started asking what was happening,” he said.

Malam Adamu insists that his wife is mentally unstable “because a sane person cannot do such to his children.”

Aisha, who survived the attack, said, “That day, we went to our granny’s house and she told him that myself and he were the ones causing discomfort to her in her matrimonial home, she said we were demonic.”

According to Aisha, that was not the first attack she had suffered from Hauwa’u.

“There was a day she pursued me in the night and her husband stopped me and asked what was happening. I told him it was Auntie Hauwa’u. He took me upstairs and she asked me, ‘Was it I who pursued you?’ I said, yes. She asked me if I wanted to go to my mum’s house [but] I was afraid then, I said, no.”

On what happened on the day of the tragic attack, Aisha said, “Yesterday, we were sleeping and I was unwell and was vomiting. She was looking at me awkwardly and in the morning, after auntie Sadika had gone, she locked the house and when I woke up, I saw she had seized Beauty (Zuhura) by the neck and Irfan was crying begging her to release his sister and I heard her asking, ‘Won’t you tell me who sent you to me?’ And I said to her these are your children. She cursed me and said we should tell her who we were and who sent us.

“She took a pestle and started hitting us with it and I ran to the gate to open the door but it was locked. When I came back, she took a machete and threatened that if anyone of us recites the Qur’an, she would kill and bury us. She was insisting that we should tell her who sent us. Then her son, Irfan, said they were sent from a hospital. From then she started using the machete on us. She tied us to the cushion and blood was spilling. Beauty started fainting and Irfan was laying on his back staring blankly at her then she struck him with the machete on his head and thigh and she struck me on the head and Beauty on her belly and head.

“After she had done all these, she hid the cutlass under the cushion, locked the house and fled. Before she fled, I heard her telling her husband on the phone that he should come and pick his kids, she had killed them. After she fled, I was scared because the doors were locked. If anyone knocked, I would ask who it was but there would be no response.

“While this was happening, Beauty called and asked for water and when I gave her some to drink. After some minutes, she asked again and when I gave her. The third time when she requested, before I could bring the water, she had given up. And Irfan too. After a while Irfan’s father opened the door with a key and saw them dead,” she said.

The ward head of Diso, Ahmed Bello said the entire community is in shock as they had never experienced something like that in the community.

Sadiq Haruna Aminu, younger brother of Ibrahim Haruna Aminu, alleges that the cause of the wife’s action may not be unrelated to the fact his brother had taken on a new wife a few months ago.

“Since then, she has been tensed and not herself. This may have made her lose her sense if not, who would kill his children?”

Sadiq said they are unaware of any mental health issues Hauwa’u might have had before the attack.

“We don’t know her with that not until this act. She was living well with her husband all this while, even on Friday I interacted with her very well,” he said.