Inside sorry state of Benue library

The Benue State Library is now a ghost of its former self. The usual serene environment and inviting ambience are fading away from the iconic… 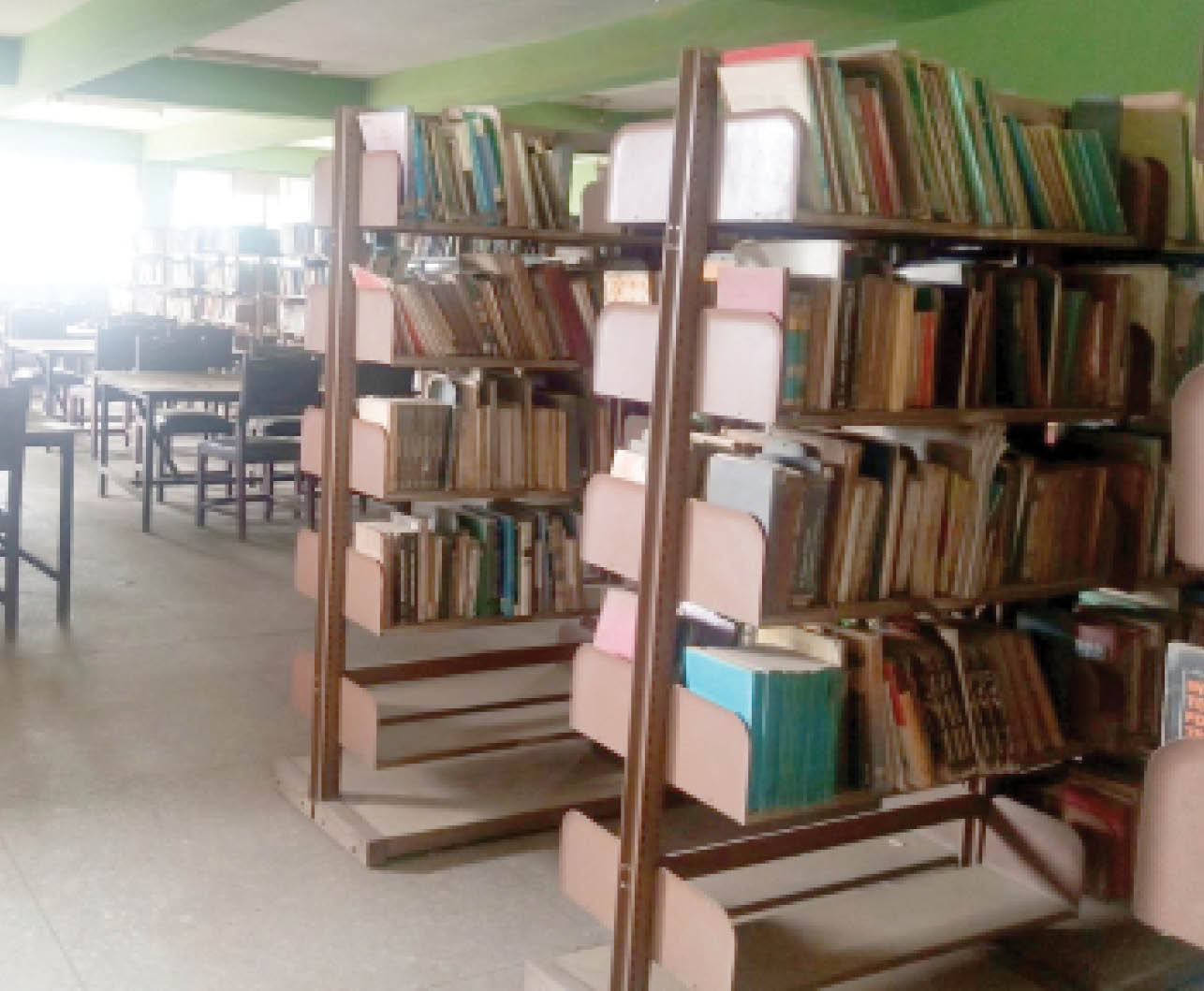 A section of the library

The Benue State Library is now a ghost of its former self. The usual serene environment and inviting ambience are fading away from the iconic edifice that hitherto attracts all and sundry. In this report, Daily Trust on Sunday captures how the library is fast losing its relevance and the plans of the government as regards the facility.

Once upon a time, the 31-year-old Benue State Library was a cynosure of all eyes and the darling of bookworms.

The two-storey building, which houses the library complex located along Senator Iyorchia Ayu Road, was a beehive of activities.

How Bruce Onobrakpeya passes down legacies through informal art education

The library provided knowledge seekers with the opportunity to access various study books and helped prepare many students and young school leavers for WAEC, NECO and JAMB examinations.

A secondary school student at that time, Mary Sokpo, said at least with an identity card, students like her could access numerous resource materials including past question papers and syllabus in the library.

However, the story is no longer the same. The building hosting the library is now dilapidated and in a pitiable state, in dire need of rehabilitation.

It’s also no longer the public space that people patronise with passion neither is it still the repository of knowledge where rich educational materials could be sourced even with the ICT section introduced about five years ago.

Our correspondent who visited the library observed obsolete materials everywhere, broken wooden chairs and desks as well as plastic containers sitting in the halls to accommodate rain water from leaking roofs.

A previous library user, Ada Ochegboji, said going there to read again was just a waste of time because there are neither books nor the once serene atmosphere in the premises to crave for.

Apart from a few staff who were on their duty desks in some of the halls downstairs, no patronisers were in sight.

State chairman of the Association of Nigerian Authors (ANA), Paul Ugah, whose office is also situated in the building, regretted that a lot of people have lost interest in reading as a culture in Nigeria and Benue State in particular.

He said that, “ANA is however making effort to revive it. The quest for material things has hindered people from reading these days as everybody in a family is pursuing money to do one thing or the other. In the olden days, people – guardians, parents and children – read stories from a book which they sit down to discuss but that isn’t happening again in recent times.

“The social media too has become a distraction for the young ones who scarcely could focus on reading books online. These days, people, students especially, google assignments given to them, extract the answers without bordering to do any research but in the 80s up to year 2000, people do real research when they are given an assignment.

“They consult libraries and read widely such that if you don’t go to the library early enough, there won’t be space left to occupy but now the desire has quenched. It’s a serious problem that a lot of organisations such as ANA are looking into.

“The state library is in a sorry state and people have lost interest in reading while the place itself isn’t habitable. That’s even where we have our office. Even the only library in the state functioning optimally, talking about the National Library is scanty too. In fact, the state’s ANA and other bodies are trying to revive the reading culture through its reading campaign. Any society that is not reading is in serious trouble,” Ugah posited.

Undoubtedly, the library needs urgent repair to save the complex from complete abandonment in the near future, as presently its excessive leaking roofs indicate the level of spoilage.

It would be recalled that the building was mildly renovated in 2017 during the first tenure of Governor Samuel Ortom.

The attempted renovation in the thinking of many people was not thoroughly done as it seemed the building was only urgently revived to save it from imminently caving in.

However, that action was taken four years after public outcry to the government to uphold the legacy for which the dilapidated structure now stocked with obsolete materials stood for.

The Ortom’s administration changed the old roofing sheets into the modern long span roofing but apparently it was badly handled by the contractors.

Sadly, successive governments in the state didn’t do much to ensure the stability of the library, which was commissioned in 1991 by Military president, General Ibrahim Babangida, until the coming of the present administration whose best for the complex is still not satisfactory.

In 2013, when former Governor Gabriel Suswam held sway, the building had almost collapsed in May of that year during the rainy season.

The then Library director, Asor Shinyi, told our correspondent during an interview that the structure could suddenly collapse unless urgent steps were taken to repair it.

The director had expressed fear that the building depicted danger signs following the rains and that if nothing was done, lives and properties were at imminent risk.

Although, he admitted that contract for the job was awarded three years earlier, the contractor however abandoned the project.

Corroborating the director, the then commissioner of Information, Justin Amatse, promised government’s immediate intervention to avert the danger ahead.

The promise was however not fulfilled until Ortom assumed office and gave the building what some critics defined as a poor face lift.

The Ministry of Information under which the library board exists was allocated only N834, 096. 622 in the 2017 state budget, with N87, 472. 783 only earmarked for the library at the time of the partial renovation. The library has indeed been severally starved of funds in the yearly budgets afterwards.

The sorry state of the complex remains as our correspondent observed during the latest visit to the library. The dilapidation is partly because it could hardly generate its own revenue.

It had rained the night before the visit and the downpour overflowed the entire complex, forcing almost all the administrative staff to relocate downstairs.

The second floor seems to have been completely abandoned and left in total control of rodents alongside water dripping from the partially removed roofs through the staircase down to the first and ground floors.

A library official, who craved anonymity, said the renovation done on the complex in 2017 was a partial one just to improve the pitiable condition of the structure compared to what it was in 2013.

The staff said no much improvement has taken place as currently during downpours, water overflows the entire complex, forcing administrative officers to find safer positions during work hours.

“The patronage is equally low,” the staff replied in response to a question by our correspondent but refused to comment further as to whether the library was still being used as CBT, JAMB centre in Makurdi.

Another official said it was long since the library received new books unlike before when it gets stocked at least two or three times in a year from the government and individual donors.

The official also revealed that the staff strength had diminished just as our correspondent sighted at least 10 workers at the complex during the visit. But, no library users were seen in the library.

However, all of the facilities observed in the library are in dire need of refurbishing while the books are obviously old stocks with sitting capacity quite adequate but lacking patronage.

The available books in the library appeared to have lost their relevance to the reading needs of the present public.

The present director of the library was absent from office at the time of visit and none of the staff on ground agreed to speak about the matter in an official capacity.

Nevertheless, the conspicuous abandonment noticed on the second and first floor of the building attested to the fact that the library is little funded or not funded at all.

But, a glimpse of the edifice from the entrance and its surroundings depicts a beautiful environment as the grasses and flowers were well trimmed.

A section of the building which holds the electronic library with an inscription boldly marked at the doorpost as “CBT hall2 remained under locks with heavy dusty desks and rumpled items suggesting that the rooms had been abandoned for awhile.

The items in the hall are the project donated by Universal Service Provision Fund which several years ago equipped the library with modern ICT facilities of at least 50 computers to boost the E-library that wasn’t after all allegedly put to proper use.

Meanwhile, the State Commissioner for Information, Culture and Tourism, Mike Inalegwu, in an interview with our correspondent in Makurdi, said “we took the case to the state executive council and they exco approved the sum of N83 million. The money was released to commence the work but there was an introductory aspect of modernisation which has to with the e-library system. As you know, we have a lot of higher institutions in Benue State and in the entire state, there is nothing like e-library.

“So, the governor in his own wisdom in consultation with myself and other persons felt there were need to establish an e-library in Makurdi, Gboko, Kastina-Ala and Otukpo to cater for the tertiary institutions located in those places. This will give our children and researchers the opportunity to have first class information instead of going through orthodox or old system of filing and other things.

“So, the money has been warehoused with the ministry of finance and as we speak, we want to do only the renovations and the roofing so that the entire interiors would be conducive for fitting in of the computers. If you go there now, you will see about 50 computers already inside, but some external organisation such as Education Trust Fund ((ETF) are interested in partnership. We can’t say no to them because that will augment expansion of library system in Benue State. So, it was not abandoned as alleged by some persons. It was because we wanted to bring in modern set of research methodology which is e-library.

“We have our children in the state and we are interested in giving them a conducive environment to do a research work and then uplift their standard of learning. Government has not abandoned the place. As we speak, there is progress and for the same purpose, I will be traveling to Abuja tomorrow (Saturday) and the outcome will be made public on my return so we will know when exactly work will commence,” Inalegwu said.