The Federal Capital Territory Administration (FCTA) on Thursday cleared a scavengers’ colony in Katampe District, as part of efforts to combat security threats in the… 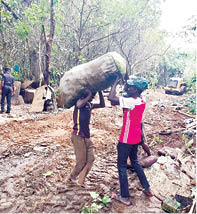 The Federal Capital Territory Administration (FCTA) on Thursday cleared a scavengers’ colony in Katampe District, as part of efforts to combat security threats in the area.

Mr Ihkaro Attah, the Senior Special Assistant on Monitoring, Inspection and Enforcement to the FCT minister, who led the operation, cautioned FCT natives against renting out their cashew plantations to scavengers.

“Part of our work is actually to rid the city of activities of scavengers and criminally minded refuse collectors.

“We came here to Katampe, where we met them heavily hidden in this cashew plantation and we have gone ahead to remove them.

“They are people who are largely tied to crime; we even saw someone’s plate number, we asked them what they were doing with someone’s number plate, they could not explain, so we had to collect it from them.

“Sometimes, we see female handbags, shoes, cloths it may be because women are vulnerable, ” he said.

Attah reiterated the commitment of the FCT Administration in removing scavengers’ colonies in the Federal Capital City (FCC).

On his part, Malam Kaka Bello, Assistant Director, Monitoring and Enforcement, Abuja Environmental Protection Board (AEPB), appealed to all scavengers in FCC to move to sites designated for them in Gosa.