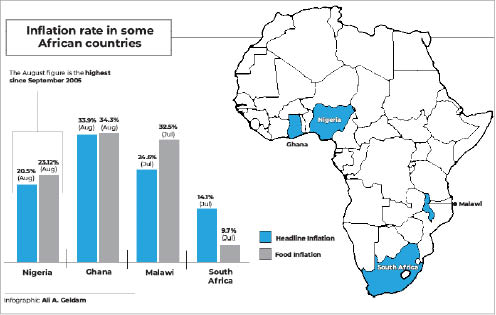 Surges in inflation across African countries are dampening the outlook for currencies in the continent, AZA Finance said in notes to clients on Thursday.

This came as Nigeria, Africa’s biggest economy reported a spike in inflation (20.52%) in the month of August. This is the seventh consecutive monthly increase and the highest level in 17 years (2005 inflation rate 24.3%).

Countries experiencing uncommon inflation pressures include Ghana, Malawi and Rwanda, according to AZA, the largest non-bank currency broker by trading volume, put at over $1 billion annually.

Analysts at Financial Derivatives Company Limited have said with this elevated rate of inflation, there is a probability that the interest rate hawks will be emboldened with a view to further tightening at the next MPC meeting at the end of September.

This is coming as the Nigerian Naira edged closer to a record low against the dollar on the black market this week, trading at 706 from 701 at last week’s close. The Naira previously fell to an all-time low of 710 to the dollar back in July.

In Ghana, the authorities are battling 21-year high inflation, which rose to 33.9% in August from 31.7% in July, as import prices continue to soar. The Cedi is the world’s second-worst performing currency this year, having lost more than a third of its value against the dollar, the worst being crisis-hit Sri Lanka’s Rupee.

The Cedi recovered marginally against the dollar this week after the Bank of Ghana on Tuesday sold $60m into the market through its forward FX auction. The currency recovered to trade at 10.05 on Monday, in line with last week’s close. It had hit a low of 10.08 to the dollar.

In Malawi, inflation has more than doubled since the beginning of the year, to its current level of 24.6%. The Southern African country is experiencing an FX shortage that has deepened its fuel. The crisis forced the Malawian central bank to devalue the Kwacha by as much as 25% in May.

Currently, Malawi is seeking IMF support to help with the fuel crisis, but the Fund reportedly postponed a planned visit this week to discuss a new loan, according to AZA.

“With the IMF delaying intervention, we see room for further FX depreciation as imports continue to dent already declining FX reserves,” AZA wrote. In Rwanda, Africa’s star reformer, prices have been rising at the fastest pace in more than a decade, hitting 15.9% in August, AZA noted.

National Bank of Rwanda’s Governor, John Rwangombwa expects annual inflation to peak at 16% this year, given the combined measures of rate hikes and a continued government subsidy on fuel and agricultural inputs, it further noted, adding that the Rwandan Franc could still see further depreciation due to the country’s continued exposure to global commodity prices. Rwanda’s major exports include coffee, tea, precious metals, and lead.

Experts have attributed the economic crises in Africa to the Russia-Ukraine war and other global issues.

When general inflationary pressure has been a big challenge to African consumers, a bigger challenge is coming from the rise in prices of food items, or food inflation.

In both Ghana and Rwanda, for instance, the food inflation for the month of August 2022 jumped to 34.4%. In Rwanda, this was the highest since 2010. In Ghana, the statistical agency reported that bread recorded the highest price increase of 64% for the month.

In Malawi, food inflation for the country in the month of July this year jumped to 32.5%

In Kenya, food inflation for August was steady at 15.3%, where it was a year earlier.

Nigeria has been experiencing spikes in food inflation, which rose to 23.12% in August, up from 20.3% a year earlier. “The higher m/m increase in farm produce prices reflects the fading impact of the green harvest in the country’s Southern parts amidst a prolonged lean season in the Northern region,” Cordros said.

Nigeria’s inflation climbs to 20.52% in August

Nigeria’s Consumer Price index (CPI), has increased to 20.52 per cent, seven per cent short of the current record of 28.20 per cent recorded in 2005, the National Bureau of Statistics (NBS) has shown.

NBS in a report released yesterday said the headline inflation rate, which was 3.52 per cent points higher compared to the rate recorded in August 2021, also reduced when compared to July 2022 by 0.05 per cent.

It said the increases were caused by a rise in prices of bread and cereals, food products like potatoes, yam and other tubers, fish, meat, oil and fat.

It continued that the increase was also due to the “Disruption in the supply of food products, increase in import cost due to the persistent currency depreciation and the general increase in the cost of production.”

Economist and founder of Cowry Asset Management Ltd, Mr. Johnson Chukwu said that even though there is a reduction in food inflation globally, Nigeria is yet to get it right on ways to cool off the inflation.

He said the intervention of the Monetary Policy Committee (MPC) would not bring inflation figures down as the issue is structural and influenced mostly by the cost of importing petroleum products among others.

“I was expecting the inflation rate to go above 20 per cent. The MPC may not address the issue conclusively because it has to do with energy costs. We are still importing our diesel, and have a higher cost of fuel in some locations among others.

“Overall, globally, we may get some respite because global food inflation is coming down but on the internal factors, we have to address the issue of insecurity in the country so that people can go back to their farms and produce more food.”

He added that the situation would continue to affect the purchasing power of citizens; “Because the value of what you can buy today when compared to what can be bought in August last year has increased by 20 per cent. So, you can only afford 80 per cent of what you can afford before and that has a direct impact.”

On his part, the President of Capital Market Academics of Nigeria, Prof. Uche Uwaleke, said the increase is above the psychological threshold of 20% and did not come as a surprise in view of the rising inflation trend in many economies partly caused by the Russian-Ukrainian conflict.

“In the light of this revelation, what becomes clear is that the recent monetary policy tightening stance of the CBN alone may not address the challenge. The government needs to formulate and implement complementary fiscal policies aimed at boosting food supply as well as reducing firm’s cost of production.”