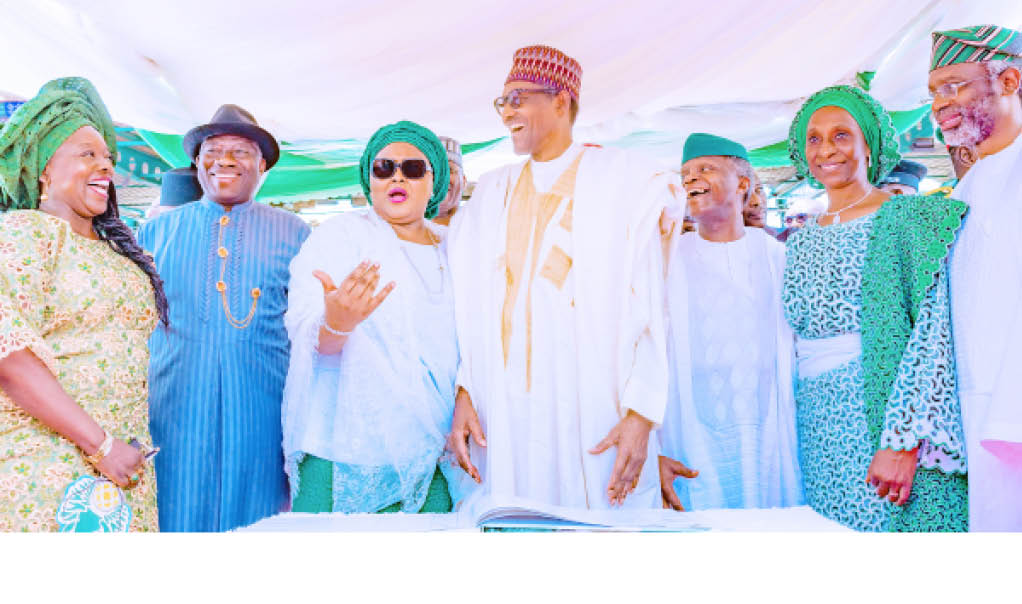 The celebration was marked with many activities, including military drills and artistic performances.

Nigeria@62: The mixed fortunes of her diversity and the 2023 agenda

Also in attendance were the Chief Justice of Nigeria, Justice Olukayode Ariwoola; Secretary to the Government of the Federation (SGF), Boss Mustapha; Head of the Civil Service of the Federation, Dr Folasade Yemi-Esan; ministers; service chiefs and other heads of security and intelligence agencies; members of the National Assembly and members of the diplomatic corps.

As soon as the president arrived at the Eagle Square, the ceremony kicked off with the national anthem.

He inspected the guards on parade before proceeding to the VIP box to observe the parade processions.

The major highlights of the celebration included parades and march past by military forces, some paramilitary outfits, cadets of the Nigeria Military School (NMS), members of the National Youth Service Corps (NYSC) and others.

The Nigerian Air Force did a couple of flying displays on some of the aircraft recently procured for the various anti-terrorism fight, as well as minutes of cultural displays by the cultural troupe.

The ceremony ended with the signing of the anniversary register by President Buhari, three hearty cheers by the parade and the firing of 21 artillery volleys for the national salute, the national anthem and the march off of the parade.

The president had earlier addressed Nigerians on the occasion of the Independence Day anniversary, where he scored the performance of the ruling All Progressives Congress (APC) administration high.

In the same vein, some state governors yesterday held events to commemorate the country’s 62nd Independence Day anniversary with messages of hope that Nigeria would rise above her challenges to be great again.

The leaders, in their messages, harped on the need for Nigerians to remain steadfast, hopeful and keep the country united as an indivisible entity, irrespective of their tribes or religions.

The Kano State governor Abdullahi Umar Ganduje, has charged members of the public and politicians to be agents of peace in the society.

The governor participated in activities held at the Sani Abacha Stadium in Kano to mark Nigeria’s independence.

“I am appealing to politicians to be wary of ill comments and other antisocial behaviours that will destabilise the public peace during this election campaign period,” he said.

Also, the Lagos State governor, Babajide Olusola Sanwo-Olu, yesterday charged those he described as “political warlords” to focus on issues-based campaigns as electioneering kicks off across the country.

The governor said there was no need to engage in politics of division, bigotry and hatred if the underlying objective was to have a better Nigeria.

He spoke during the 62nd Independence anniversary celebration held at the Mobolaji Johnson Arena, Onikan in Lagos Island.

Nigeria on the rise despite challenges – Kwara governor

The Kwara State governor, AbdulRahman AbdulRasaq, in his message, said Nigeria was on the rise regardless of some drawbacks in its nation building efforts.

On his part, the Rivers State governor, Nyesom Wike, said there was a need to have a new government that cares about the unity of the country and well-being of its citizens.

Wike said this at the march past and parade in commemoration of the 62nd independence of Nigeria at the Sharks Football Stadium in Port Harcourt on Saturday.

In Borno State, the independent anniversary celebration held for the first time after 12 years due to the activities of Boko Haram insurgents.

The occasion, which was held at the Ramat Square, Maiduguri, witnessed colourful parades by the men and officers of the Nigerian Police Force and other dignitaries in attendance.

Governor Babagana Zulum said the celebration was an indication of the return of peace to the state.

Zulum was represented by his deputy, Umar Usman Kadafur.

Governor Muhammadu Inuwa Yahaya of Gombe State has warned politicians against perpetrating any form of political violence that will disrupt peace in the state.

He gave the warning yesterday during a live state-wide broadcast, to commemorate Nigeria’s 62nd Independence anniversary and 26 years celebration of creation of the state.

He said as the political season kicks-off, politicians and other stakeholders should play politics by the rules, embrace peace and eschew political violence and blackmail.

Governor Yahaya also pledged to provide a level-playing ground for all parties in the state.

However, he stated that his administration’s commitment to the rule of law and democratic tenets should not be mistaken for fearfulness.