In every religion, suicide is considered a sin. However, people often find themselves in situation they deem unbearable and end up taking their lives. Earlier… 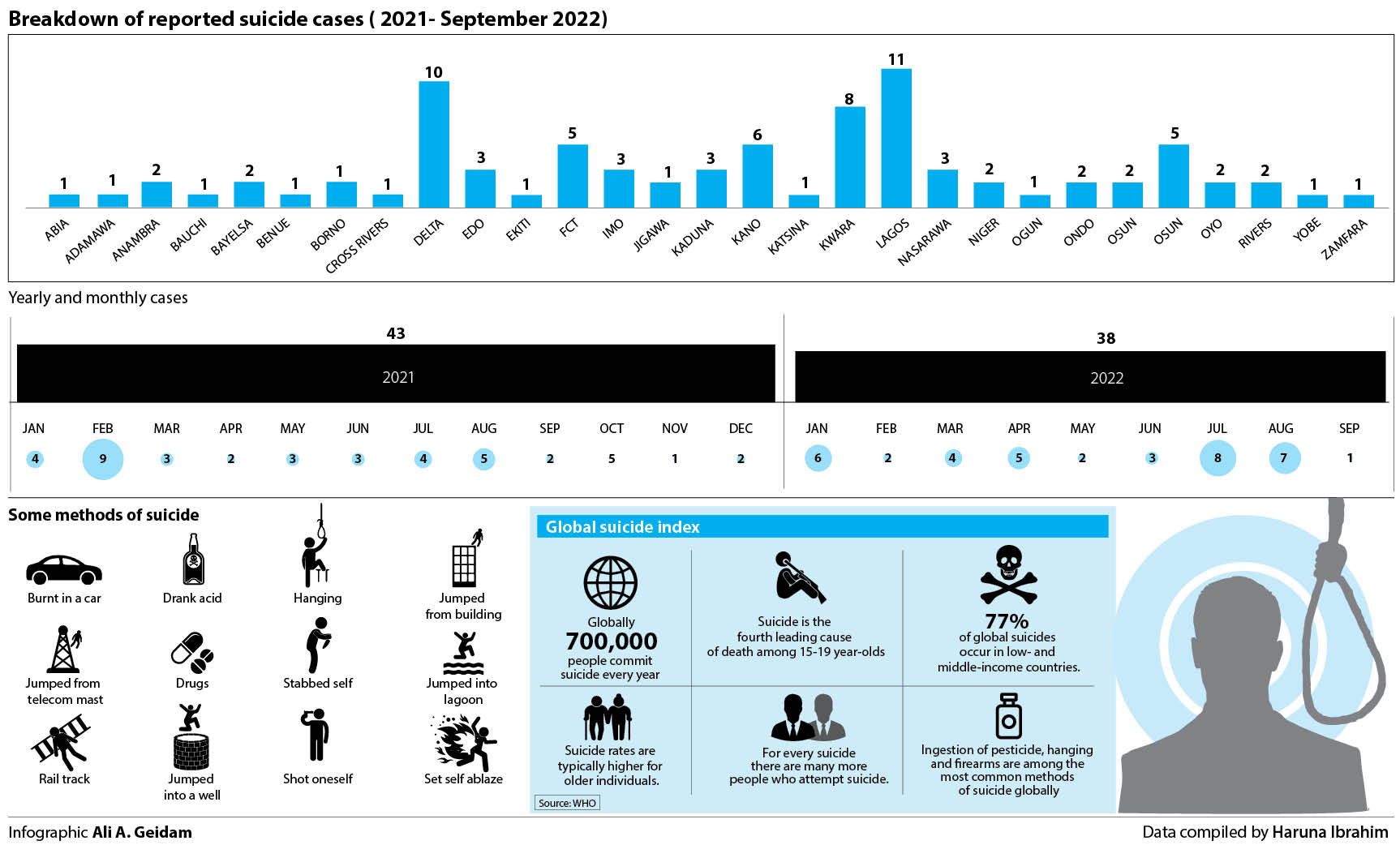 In every religion, suicide is considered a sin. However, people often find themselves in situation they deem unbearable and end up taking their lives. Earlier this month, World Suicide Day Prevention was celebrated on September 10, Daily Trust on Sunday  looks at the data surrounding suicides in Nigeria within the last two years.

There is no easy way to die, not even through suicide. Oftentimes, many families find it hard to recover from hearing that their loved ones decided to take their lives rather than discuss their burden with family or the people close to them.

Around the world, an estimated 703,000 people commit suicide each year. There are perhaps 20 people who attempt suicide for every suicide, and many more have significant suicidal thoughts. Suicidal behaviour has a huge influence on millions of people and causes them to experience severe grief.

Every suicide death is a public health issue that has a significant effect on the people in the area. We can lower the number of suicides worldwide by increasing knowledge, removing the stigma associated with it, and promoting informed action.

There is only so much the human mind can bear when it comes to stress and challenges. People commit suicides for many reasons. According to the data compiled by Daily Trust on Sunday, 15 persons committed suicides out of depression and other mental-related challenges.

Emmanuel Okikechukwu and Amaka Okafor who were lovers; Florence—a mother of four; Subomi Olubayo; Ibrahim Lawal and Murtala Adelakun, all fell victim to suicide after a long battle with depression.

Some took their lives out of fear because of the crimes they’d be reprimanded for. There is the case of Uchechukwu Nweke, from Amunike community in Anambra State, who committed suicide after killing his wife and son.

Some victims also took their lives due to economic hardship and lack of finances to meet up with their needs. In Awe community in Nasarawa, Danladi Ali committed suicide because of the debts he owed many people. Danladi Shu’aibu, 20, also committed suicide after he wasn’t able to pay the National Examination Council fee.

A 200-level student of the Nnamdi Azikiwe University Awka also took his life because of his inability to pay for his school fees. In Kubwa, Abuja, Ibrahim opted for suicide after not being able to pay his loan of N520,000.

According to the data, a majority of victims who committed suicide were in the Northern region. Thirty-three persons were from the northern region, with Kaduna and Kano as the leading states. The southern and western regions account for 35 victims of suicide mostly from Delta, Osun, Lagos and Oyo. However, the eastern region records only a few suicide deaths from Imo, Abia and Anambra.

The data also records that a majority of victims who committed suicide were men. Out of the total of 81 persons who died by suicide, only 11 were women.

Hanging was the common choice of death by many of the victims. Uchechukwu Nweke, Bright Haruna, Don Sedan, Fisayo Oyeniyi, Feranmi Fasunle amongst committed suicide by hanging.

The other common choice was the use of chemical substances such as insecticide, sniper, otapiapia, agro chemicals etc. Some set themselves ablaze and other did irreversible harm to themselves e.g., Lance Corporal Jibrn, Major Uj Undianyede and Chinonso Anene who shot themselves with guns.

Patricia Agwu (not real name), who suffered depression and was almost a victim of suicide, told Daily Trust on Sunday that often times before one considers to take their life, they’ve thought and reconsidered all possible options.

“I remember almost committing suicide. It wasn’t that I didn’t care about my family or realise how sad certain people will be if anything had happened to me. However, depression isn’t an injury where you put a bandage and expect that all will be okay.

“It’s a constant battle in your mind with fear and anxiety. Life can be hard for some people and not everyone is willing to fight that battle, they prefer to surrender and in turn opt for suicide.”

However, after a series of therapy and other factors, Patricia mentioned that there is hope for persons who nurse suicidal thoughts.

“At first, I didn’t understand it, but then I decided to take my therapy seriously. I changed my environment, met people who loved me unconditionally, people who were kind to me and who gave me the push I needed to keep going. Now, I understand that life would be hard but I have the best support group around me and eventually everything will be okay,” she said.

In an interview, a psychologist, Dr Naomi, she explains that suicidal thoughts are a symptom of an underlying problem. For a person to contemplate suicide, it just goes to show that there’s a bigger problem than the suicide itself. Treatment is effective in many cases but it’s taking the first step to ask for help that is the problem.”

She further explained that “Suicidal thoughts come after a person feels they can no longer cope with an overwhelming situation. This could stem from lack of finances, heartbreaks, death of a loved one, one having a terminal illness, sexual abuse, social rejection etc. There’s a belief that suicide is the easy way out but actually it’s a very hard way. It’s very difficult for a person to die from suicide.”

“There’s this juxtaposition of contrasting words and most of them feel that suicide is the only way to end the emotional or physical pain they’re experiencing. However, suicide is a permanent solution to a temporary problem. We need to make people understand that there are many alternatives to alleviating the suffering they are experiencing and so many ways we can support them.