The presidential candidate of the Peoples Democratic Party (PDP), Atiku Abubakar, has pledged to implement the charter of demands rolled out by the Christian Association… 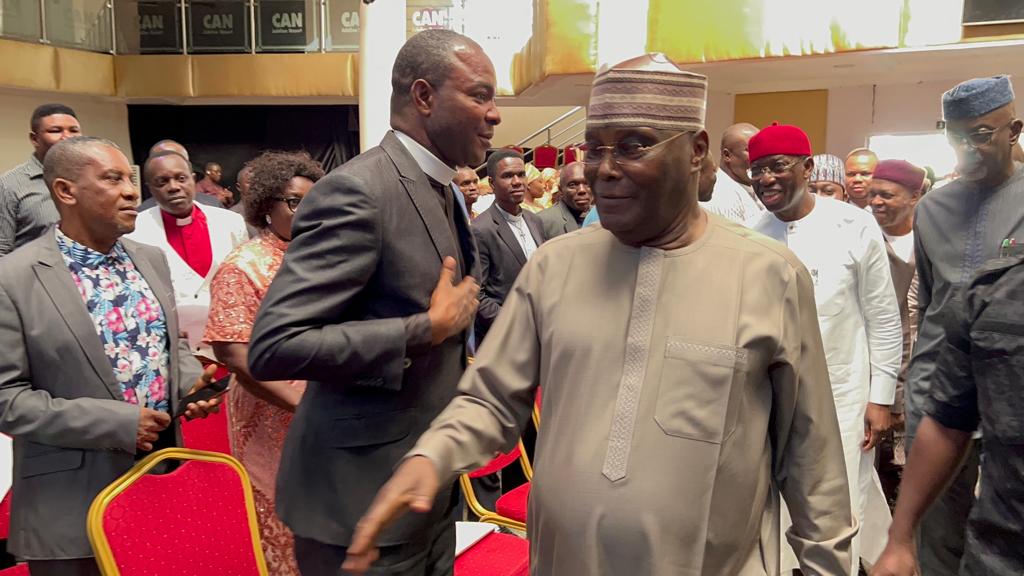 The presidential candidate of the Peoples Democratic Party (PDP), Atiku Abubakar, has pledged to implement the charter of demands rolled out by the Christian Association of Nigeria (CAN) if he emerged president in 2023.

Key demands in the charter include; state police or a decentralized policing system, devolution of power to states, equal rights for all religions and their adherents, right to self-determination by all ethnic groups, right to control natural resources by communities that bear them, no to open grazing and equitable electoral system that guarantees the right to vote and be voted for by all.

Atiku said this on Tuesday in Abuja at the ongoing parley organised by the Christian Association of Nigeria (CAN) for all the presidential candidates of the 18 registered political parties contesting the 2023 presidency.

This is as he lamented that the ruling APC deceived Nigerians in 2015 by promising to restructure the country which they didn’t do to date.

Two other candidates, Peter Obi of the Labour Party (LP) and Prince Adewole Adebayo of the Social Democratic Party (SDP) also met with the CAN leadership on Tuesday.

According to Atiku, the proposal the CAN leadership presented to him is what he believes in and stood by, even when former President Olusegun Obasanjo who was his principal and his constituency in Adamawa disagreed with him.

He also said he wrote a book on his thoughts, which conforms to the proposal CAN presented to him and he still stands by those objectives in the book.

“I stand before you here not to campaign but to tell you the honest truth, what you have presented to us is what I have always believed in, and if I have the opportunity, I swear to God, I will do it.

“The fundamental front lines that we have seen in the last seven to eight years only occurred because you wanted change in 2015, and you elected the change you are seeing and experiencing now,” Atiku said.

Atiku, however, said that all this could not be achieved without a constitutional amendment, which he would work towards achieving.

Speaking after Atiku, Obi of LP said that all the 18 presidential candidates will make the same promise, but that Nigerians must check the sincerity of the promises and only support that they can trust.

According to him, his target was to move Nigeria from consumption to production, secure and unite the country.

Obi said that Nigeria had met the qualifications to be characterised as a failed state because the country was allegedly no longer in control of its territory and economy.

“All presidential candidates will tell you the same story; everybody’s story will be as sweet as the other ones. What you should do is to check the sincerity and the truth and the one you can trust.

“It is now who among these 18 presidential candidates can you trust because there is no promise that we are going to make that has not been made in the past, that promise has always been there.

‘What I want to do is to move the country from consumption to production; it is not a productive country, our priority is to secure and unite the country, it is the number one thing you need to do.

Nigerians will be more patriotic –Adebayo

Adebayo of SDP said he will get Nigerians to be more patriotic and allow everyone to worship God peacefully.

“We believed in moving the country forward. The problems still fall back on the leadership of the country.

“So, to solve our problem, the leaders must be truthful and just. In this country, truth is an offence. If a leader is truthful, nobody will remember his religion or party.

“The church is to participate in politics. But don’t do it the way the politicians do it. Teach us the good way to do politics,” Adebayo said, adding that he will address poverty.

We won’t be partisan – CAN president

The CAN president, Archbishop Daniel Okoh in his remarks, said that CAN is very careful not to be partisan and it still maintains that position.

“All the positions we have taken, we have not changed any of them, if we want to change any position, we will let the Nigerian public know. When people read insinuations on social media, I will advise that people should come to CAN to verify and to be sure that what you see out there is truly the position of the Christian Association of Nigeria,” he said.

He also said that the idea of the interaction was to come together to review the understanding of the Nigerian crisis of development and governance and collectively find a lasting solution.

“As an association of Christian citizens who believe in this country and continue to pray for its unity, peace, and prosperity, we have spent time to review the problems that hinder peace and progress in the country and are hereby making suggestions on how best to improve them.

“We have consulted with Nigerians of diverse religious, ethnic and social identities on the problems of the country and the solutions to them have been articulated in the strategic document we call, the Charter for Future Nigeria.

“The Charter for Future Nigeria begins with a diagnosis of Nigeria’s problem and locates it primarily in an incoherent constitutional and institutional framework that defines governance and social and economic interactions in Nigeria,” he said.