After 28 years of interregnum occasioned by legal battle and fierce contest over the stool, Ogun Governor Dapo Abiodun on Wednesday installed the new Orimolusi… 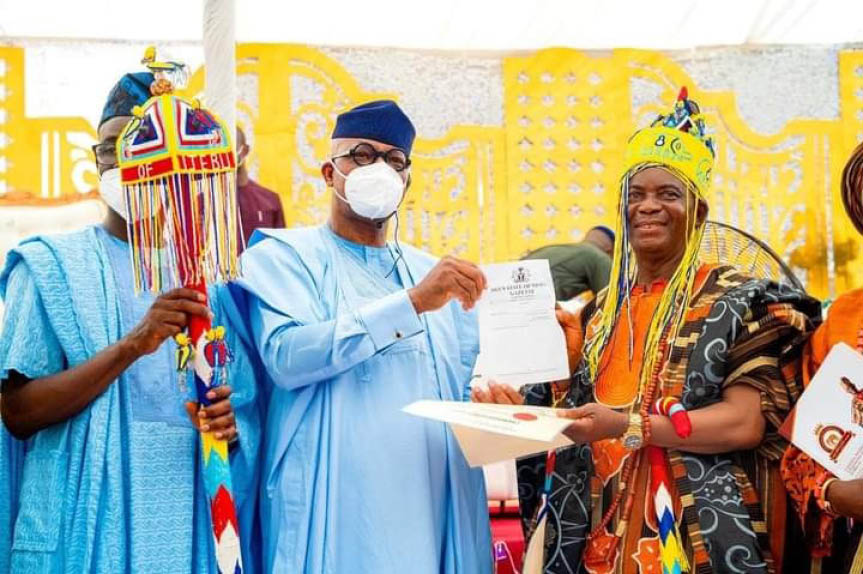 Schools were closed. Business activities suspended. And Ijebu-Igbo was agog on Wednesday as the new Orimolusi was installed, laying to rest, nearly three decades of succession battle to the highly revered stool.

A 27-year-old man or woman of Ijebu-Igbo indigeneship witnessed such an event for the first time since birth. Hence, it was also a moment of joy for the indigenes both home and abroad as they were joined by friends from all walks of life.

Governor Dapo Abiodun ordered that all schools in Ijebu-Igbo and its environs should not open on Wednesday, in order “to give room for the parents, teachers and indeed learners to partake in the epochal event.

“An event of this magnitude would draw sons, daughters, and indeed guests and well-wishers to the ancient town of Ijebu-Igbo,” the governor said in a statement.

Ijebu-Igbo, the headquarters of Ijebu North LGA, is one of the major towns in Ogun State, and the home town of late eminent politician and Afenifere Chieftain, Chief Abraham Adesanya; late Senator Buruji Khasamu; Senator Adegbenga Kaka, a former Deputy Governor of the state, among others.

As one of the major towns in Ogun State, Ijebu-Igbo is bordered by Oyo, Osun and Ondo states. The town was one of the three earliest settlements in the state in the 15th Century.

The Orimolusi stool is a first-class title recognised by the government. The last Orimolusi, Oba Sami Adetayo, joined his ancestors in May 1994, which was 24 years ago. Ever since, the seat has been without an occupant due to a dispute over who should succeed him.

In 2018, the state government under Governor Ibikunle Amosun’s administration washed it hands off the long delay in the emergence of the new Oba, blaming it on “various court cases, instituted by warring factions in the town.”

The then Commissioner for Local Government and Chieftaincy Affairs, Jide Ojuko, said government had at various times intervened to settle the rift between the warring families, to no avail, adding that protracted court cases was a major issue stalling the installation of a new king for the town.

“The issue with the installation of a new king in Ijebu Igbo is the protracted court cases. I had tried to talk to them when I came in because of one or two contacts I have with the town. I called them to my office and I advised them. I did all I could to make them see reasons to allow us free passage so that a new king can be installed.

“There are petitions everywhere. Not petitions written by individuals, but by law firms, so we must be careful when cases are in courts. They even have cases up to the Supreme Court, so, it is not about Ogun State Government. It is the people of the town that are delaying the installation of their king,” he said.

In December last year, hope beaconed as 11 warrant chiefs were inaugurated by the Chairman of the Local Government, Mr Bolaji Odusanya, on the advice of the state Ministry of Local Government and Chieftaincy Affairs to commence the process of filling the stool.

They were given 14 days within inauguration to submit the report.

However, on January 5, 2022, respite came when the kingmakers of the community elected Prince Lawrence Jaiyeola Adebajo, as the new Orimolusi.

Adebajo polled six votes to defeat Prince Soliu Sadiku in the election, who had four votes.

Last week, the state government approved the appointment of Lawrence Jaiyeoba Adebajo as the new Orimolusi of Ijebu-Igbo effective 16th February, 2022. This set the tone for his official installation.

And on Wednesday, the long waiting came to end as Abiodun officially installed the new Orimolusi at the ceremony held at Abusi Edumare in Ijebu Igbo.

The governor had presented the letter of appointment as well as the staff of office to the new monarch in the presence of cheering crowd.

In his remarks, Abiodun promised that his government would continue to prioritise the welfare and wellbeing of traditional rulers.

Abiodun said that traditional rulers played a pivotal role in sustaining the rich cultural heritage of the people, saying they remained the custodians of value systems and norms.

He added that traditional rulers remained indispensable partners in the “Building Our Future Together Agenda of our administration”, and integral part of the state’s security architecture.

“In this wise, the position of Ijebu-Igbo cannot be over-emphasized. Ijebu Igbo, not only shares boundaries with other states, it is a centre of commerce and knowledge, attracting people from a variety of backgrounds.

“Against the backdrop of our inter-state security initiatives, such as Amotekun and the recent agreement between our state and Oyo over rising kidnapping, banditry and other manifestations of insecurity, we will solicit the support of our Kabiyesis and Olorituns (Village heads) for instance, to support our efforts at nipping the scourge of crimes and criminality in the bud.

“With all of us on the same page, there will be no hiding place for criminals and social upheavals will be reduced to the barest minimum,” he said.

The governor appreciated the industrial and commercial nature of the Ijebu people, specifically those from Ijebu-Igbo that had immensely improved the state economy.

He urged the people to pay their taxes and rates to government so that the government would be able to provide infrastructure, especially in the rural areas.

In his speech, the newly installed traditional ruler thanked the people of Ijebu Igbo and the state government for their support, which brought about his installation.

Oba Adebajo sought the support of other traditional rulers to ensure the socio-economic and political development of Ijebu Igbo. He promised not to let the people down.

He called for the support of the five kings representing the five quarters in the town and also called on the people of the town to come together and join him in the task of rebuilding the town.

Oba Adebajo, an entrepreneur, was born on November 11, 1953 in Fowoseje, a remote village in Ijebu Igbo.