I, Makinde, Ortom, Ikpeazu, Ugwuanyi are bedrock of PDP – Wike

Nyesom Wike, Governor of Rivers State, has said he and four other governors dubbed as G5 are the bedrock of the Peoples Democratic Party (PDP).… 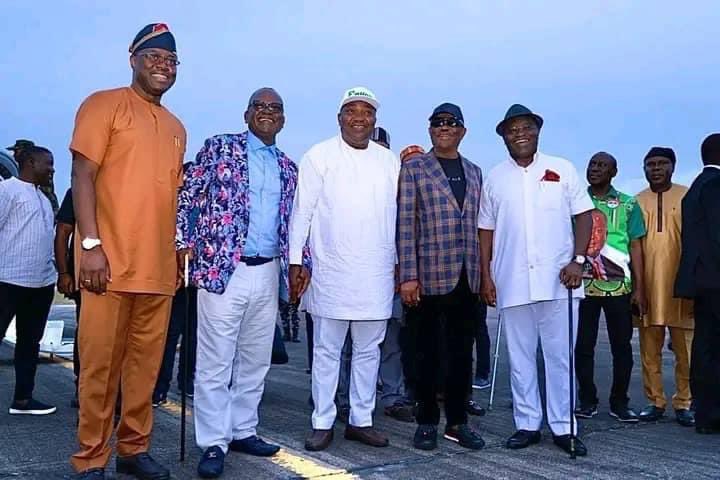 Nyesom Wike, Governor of Rivers State, has said he and four other governors dubbed as G5 are the bedrock of the Peoples Democratic Party (PDP).

The governor, however, said he and his camp are willing to reconcile with the leadership of the Peoples Democratic Party (PDP).

Wike stated this in Bauchi on Wednesday after a meeting with the state governor.

Wike had led four PDP governors to their Bauchi state counterpart for what they described as a “solidarity and fraternity visit.”

The three other governors are Samuel Ortom of Benue State, Okezie Ikpeazu of Abia Satate, and Ifeanyi Ugwuanyi of Enugu State.

The governors, including Seyi Makinde of Oyo State said to be on visit to the United States, are calling for the resignation of Iyorchia Ayu, the PDP national chairman — a demand that has thrown the party into crisis.

The five governors have also pulled out of the PDP presidential campaign.

Wike said he had not closed the door for reconciliation, adding that all they wanted is equity and justice.

“In fact, that is the hallmark that PDP stands for. We have never closed the door and we would not close the door.

Wike’s visit to Governor Mohammed came hours after Atiku Abubakar, the PDP presidential candidate, had met with Mohammed in Abuja.

The Bauchi governor had threatened to leave the PDP presidential campaign council after accusing Bauchi politicians loyal to Atiku of working against his re-election bid.

Muhammed, who expressed excitement to have received the governors, also said he shared something in common with them.