I criticise Buhari for failing to end killings in Benue — Ortom

Governor Samuel Ortom of Benue State has said that he only criticises President Muhammadu Buhari for not being able to end killings in the country.… 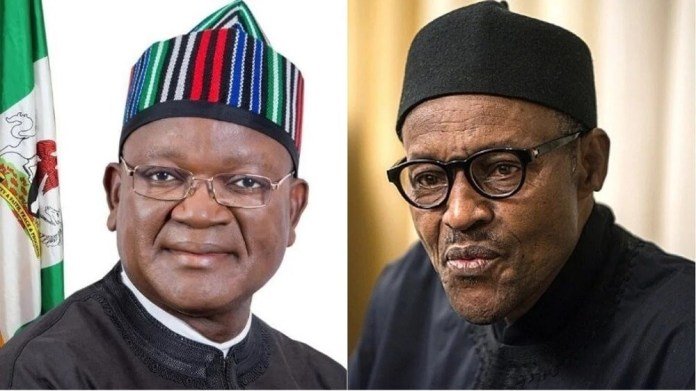 Governor Samuel Ortom of Benue State has said that he only criticises President Muhammadu Buhari for not being able to end killings in the country.

The governor’s explanation was in reaction to a statement credited to the president by the Chairman, House of Representatives Committee on Tertiary Education, Aminu Suleiman Goro, during the inauguration of some projects at the renamed Federal University of Agriculture, Makurdi.

He had during the occasion asked Ortom to endeavour to acknowledge his administration’s capital projects in Benue State rather than cast aspersions on the president.

But, the governor in his speech at the Independence Day Interdenominational Church Service held at Faith Cathedral of All Nations Evangelism Ministry, Old GRA, Makurdi said he held no personal grudges against the president.

The event was organised by the state government in conjunction with the state chapter of the Christian Association of Nigeria (CAN).

Ortom said, “I will not stop until the killings stop. If the federal government had taken to my counsel which was divine, we wouldn’t be where we are today. In 2016, I started voicing out about insecurity. The essence of a dog barking in a house is to inform the owner of the danger coming.

“Instead of taking my counsel, I have been intimidated. Now, insecurity has escalated in many states and here people cannot go to farm. I will never be happy with this development,” he said.

The governor wondered why the government had not disarmed nomads carrying sophisticated weapons and killing innocent people but had continued to deny lawful state security outfits the right to acquire arms to protect lives and property.

Earlier, Archbishop Yiman Orkwar, who preached on the topic, “The Tripod of Justice,’’ said that for Nigeria to move forward there must be justice, equity and fairness.

In his remarks, the state CAN Chairman, Reverend Akpen Leva, urged Nigerians not to lose hope in the country.