I aim to capture pain through photos — John Benedict

John Benedict is an award-winning photographer who won Face of Arewa thrice and was recognised by Bawses Enter10ment Network for his work. In this interview,… 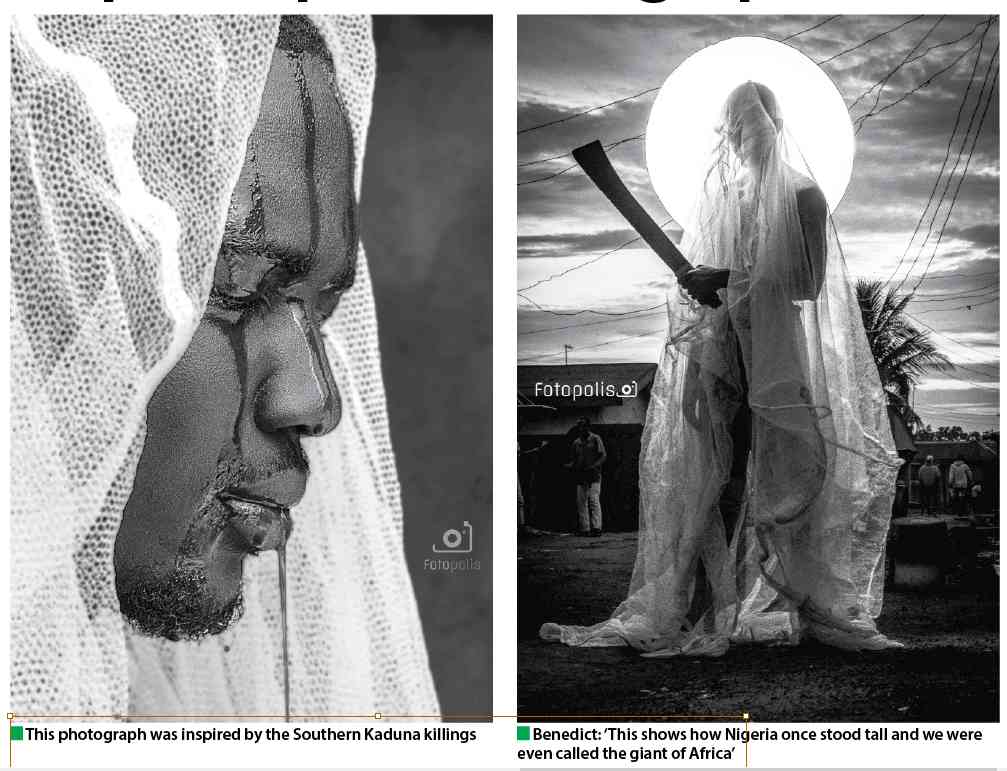 John Benedict is an award-winning photographer who won Face of Arewa thrice and was recognised by Bawses Enter10ment Network for his work.

In this interview, he talks about what drew him to photography, the impact of the Southern Kaduna killings in his work, and more. Excerpts:

FG: Most parts of Nigeria to experience flooding soon

Some of your work, like the one of a veiled man dripping wet seems to depict something sorrowful. What triggered this?

It represents the killings happening in the southern part of Kaduna State and the fact that the government failed to take the needed action to curtail it. It was my way of creating awareness through photography and also pointing at the plight of the people.

There is another photograph of a veiled girl backing a full moon. Are some of the stories you try to tell futuristic?

There are two shots, one of a girl without a veil and the other where she is fully veiled. It shows how Nigeria once stood tall and we were even called the giant of Africa. The second photograph depicts our present state, the fact that we are hiding behind our past glory. We are now covered by the scandals in our nation and suffer from different kinds of diseases in politics and our social life.

Your work sometimes looks like a painting. What does it take to shoot such photographs?

I first picture what I want to capture in my mind, and then take as many as possible until I get it right. Back to my computer, it requires the use of the right software. This is where the recreation of the image takes place.

What do you always aim to achieve?

I’m inspired by everything in this life, especially what affects human life and the environment. My aim is to always pass across a message that would be understood by my audience.

How do you get models for your shoot?

I shoot with what I have and ensure I use it to achieve what I need. Sometimes I put up a request for models and pay them after the work is done.

How did your journey as a photographer begin?

I started under the filmmaker Toka Mc Baror. I worked under him as a crew member. Once, while I was hospitalised and witnessed the pain patients pass through, I felt the urge to tell such stories through photography.

I later got a job as a head photographer at Pixel Media Service at Ungwan Rimi, Kaduna, but I was not satisfied with what I was doing because there was little room for creativity. I resigned and started telling stories through pictures in 2018. I have no regrets today because I can tell untold stories.

I never regretted a day of photography because it helps me to tell stories people can not come out and talk about, and we have received a lot of recognition, internationally and nationally.

Like this past lock-down of two weeks imposed on Kaduna state governor, I set out to tell the people about the movement and compliance of the state as at that time, and the BBC Igbo called in for the information about the lock-down via picture. and it was mine they asked for based on the research about me and my photojournalism.

How financially profitable would you say making art has been for you so far?

It has been both a sweet and bitter journey. Money was not my initial objective. I wanted to give my all and then hope the money would come. Moving forward, getting people to like and talk about my work comes with a different kind of benefit.

What are you working on at the moment?

Presently, we are working on a campaign on three key areas that have been a recurring situation in our society. We hope to get sponsors for the project, which are would capture the Southern Kaduna killings, incidences of rape and what we call ‘The Black and White Time’.