How we survived 100 days in captivity – Released Kaduna train victims

Released victims of the Abuja- Kaduna train attack which occurred on March 28 have narrated their experiences of how they survived 100 days in captivity. 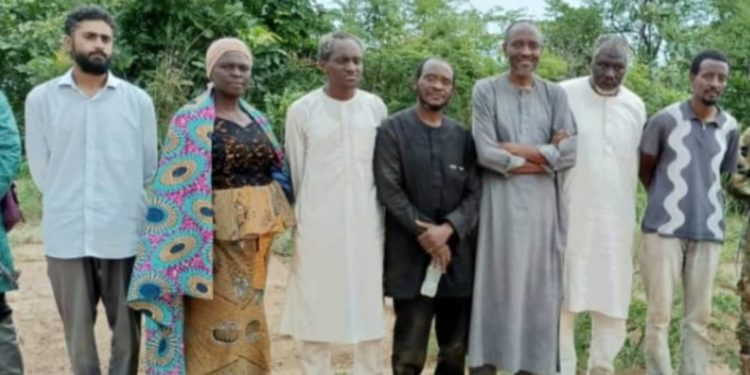 Released victims of the Abuja- Kaduna train attack which occurred on March 28 have narrated their experiences of how they survived 100 days in captivity.

Daily Trust reports that following the release of seven victims on Saturday, about 44 victims including four children and an 85-year-old woman now remain in captivity.

Speaking with a select group of journalists in Kaduna, three of the victims who were released on Saturday said their captives had treated them well and even slaughtered six cows and fed them throughout their three months of captivity.

Muhammad Daiyabu, whose pregnant wife was earlier released, dismissed several reports circulating on social media stressing that reports about victims beaten by snakes were false. He however said they had killed about 10 snakes and two scorpions within the enclaves.

“Most of the snakes were killed by our captors, so the information that we were beaten by snakes is false as no one was beaten by a snake,” he said.

Daiyabu who spoke on behalf of other released victims assured that the remaining victims are alive and well, adding that, “my mother, who is battling with high blood pressure, almost collapsed when she heard that the victims were being bitten by snakes.”

He clarified that one of the captives was shot through an accidental discharge by one of their captors’ children while playing with a gun. “The bullet brushed one of us on the stomach, but thank God it did not go through. Our abductors were very worried when the incident happened and they apologized for it.”

He frowned at the way false reports were circulated in the media, which he said was causing more harm than good for the victims still in captivity.

According to him, “after my release, I heard many stories which were not true. Being in captivity is not something you will wish for your enemy. Immediately we were captured, our captors untied us and kept telling us that their issues are not with us, but with the government.

“They took care of us, they did not beat, harm, or maltreat us and in the 100 days that I spent there, they slaughtered six cows for us to feed, when we were sick, they did their best to provide drugs and what I will never forget is what they did for my pregnant wife by setting her free. This shows that they have pity in their hearts,” he said.

He appealed to the government to meet their demands so that the remaining victims can be freed saying, “The most worrisome part is the fate of the remaining people left in the bush.”