‘How we massage women to fertility’ 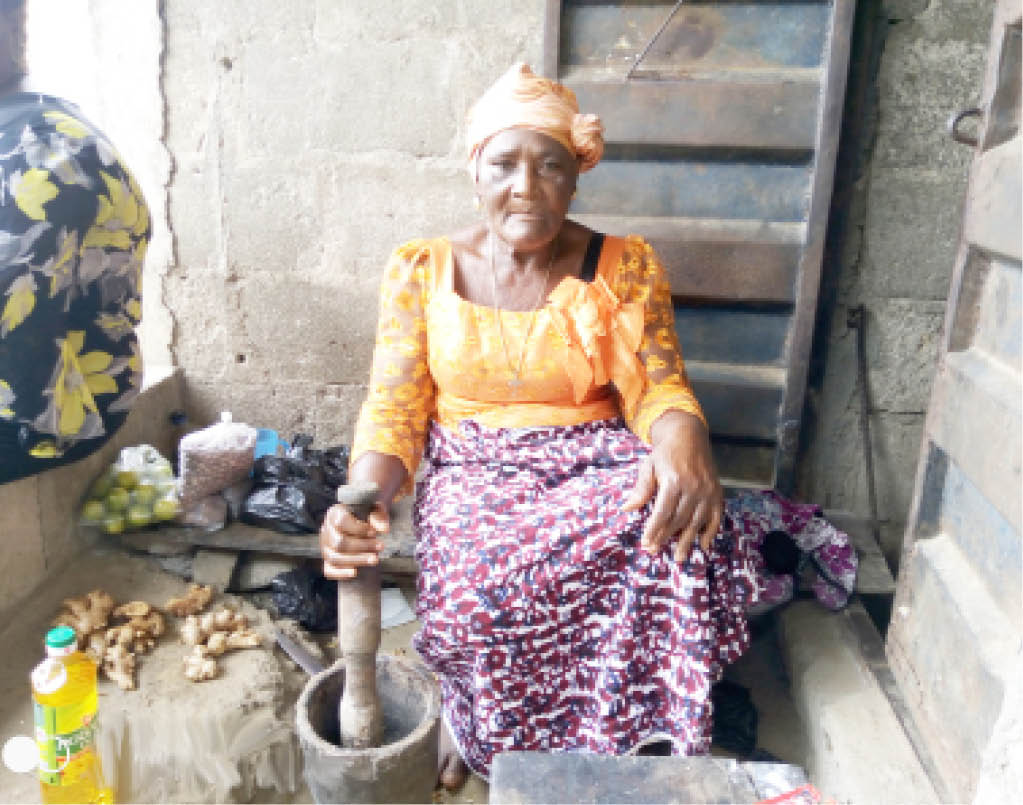 Womb setting is a traditional fertility treatment practised mostly by women of the southern region of Nigeria, especially in Bayelsa. Some women who spoke with Daily Trust testified that they got pregnant after undergoing the process of massaging and womb setting, after many years of waiting. However, according to orthodox health experts, the practice is not safe as it could lead to infections and other complications.

Although seemingly unpopular in many places in Nigeria, massaging is fast becoming part of traditional medicine in the South-South region, particularly Bayelsa State.

Many people need professional massagers for different purposes. While some may need them for fractured bones, dislocated joints or pains in the body, Daily Trust learnt that many married women approach them to aide fertility.

According to the Merriam Webster dictionary, Massaging is the manipulation of tissues by rubbing, kneading or tapping with the hand or instrument for relaxation or therapeutic purposes.

Few women patronising a professional massager confessed to the effectiveness of the treatment.

It was gathered that even wives of some prominent leaders also seek the services of the massager in some cases.

Research proves that massaging has enormous benefit to the human system, including reducing stress and increasing relaxation, reducing pains, muscle soreness and tension.

Other benefits are improving circulation, energy and alertness, lowering heart rate and blood pressure, as well as improving immune function.

According to her, many married women who could not conceive had, through her treatment, got pregnant gave birth.

Daily Trust learnt that she does not only engage in massaging for fertility but also gives traditional treatment to patients who have ailments that could hinder them from getting pregnant.

She said people came from many parts of the country to patronise her, and all of them had testimonies at the end of the day.

She was happy that God has used her to give joy to many families who might have had issues because of children, saying that in most cases, some of her patients could not get their problems solved in hospitals but after massaging, they entered the family way.

“It has been more than 20 years since I started doing this work. I have also treated a lot of people using traditional medicine. I treat fibroid and other ailments that hinder someone from getting pregnant.

“People have been coming from all the southeastern states, Edo and Rivers, and several other places for treatment. Just last week, I treated someone from Port Harcourt in Rivers State.

“There is a pastor’s wife from Benin who did not have a child, many years after wedding. She could not get pregnant because of sickness. After going to several hospitals without cure, she was directed to me and I massaged her until she got pregnant. I treated her and she was able to give birth to children. Since then, they have been directing people to me.”

She continued, “I have taught my children how to do this treatment and massaging. In case I am not around again, they will continue with it, at least to serve humanity.

“There was a time a wife of a prominent leader in this country was sick. She heard of me and sent some soldiers to my house and they took me to her house in Yenagoa here. I massaged her until she became well.

“We always take time to massage people for fertility. It can take one week or more for the person to be okay. But if it is the one that goes with sickness, it may take up to one month. Certainly, the person will get cure at the end of the day.

“I learnt this medicine from my village in Lobia. When I was young we had people who were doing it, though it was not popular. Nowadays there are hospitals everywhere and people tend to forget our God-given herbs.

“There are some sicknesses that don’t need English drugs but herbs. Only massaging can solve a lot of problems in the human body. Look at me, it is only three years that remain for me to be 100 and I am still walking freely. I don’t need a walking aide. I still climb these steps comfortably.

“I still go to church, market and social events. I have not been sick, so I have not visited hospitals like people of my age will do because I treat myself with traditional medicine. I make use of natural things. Even leaves you think are common could be very medicinal. Hospital is good, but not for every sickness.

“My first son is going to 70 years and I am still strong and rendering services to humanity, even at 97.”

Some people who said they came for massaging said it was good. According to them, since they started patronising this professional massager, they have seen great different.

The women, who declined to mention their names, said they were having health challenges until they were directed to the woman; and with what they observed so far, it appeared they had seen solution to their problems.

One of them said, “I have spent so much money in the hospital and the same problem still lingered, but since I started receiving massaging and treatment here, I have seen a great difference.

“Even the pains I used to experience in my stomach have since disappeared. I hope that by the time I complete the treatment, all my challenges would be over.”

Another patient said, “The treatment is going well and working for me. It was even my pastor that directed me here after a challenging sickness. What I couldn’t observe in my life as a woman, the treatment has made it possible.

The male folk are not left out of this practice as, Godday Okoro also told Daily Trust Saturday that massaging was passed down from his grandmother to his mother, who he works with at their fertility home.

“We have been in this practice for a very long time. It started as service we only offered to our family and close friends, but when we saw how beneficial and effective the practice is, we decided to open the clinic,” Okoro said.

He said they also treated accident victims in their home, including those who have broken bones.

Okoro said he and his mother began official practice in 2007 in Lagos. He is the last, out of seven children and the only one who works with his mother.

“I started with general body massage when I was in junior secondary school. Mama won’t let me touch women at that age as she didn’t consider me mature enough.

“To get a womb massage at Mama Ijaw’s Traditional Medicine will cost nothing more that N2,000. Our official rate for womb massage is N2000. However, sometimes we negotiate with some people and they pay N1,000. This cost is only for womb massage. By the time Mama is done setting the womb and administering the herbs that would be needed for the process, then a full cost would be given to the client,” he said.

He said the process involved checking the womb to see if there are issues, such as blockage of the cervix canal, blocked fallopian tube, etc.

“Mama will usually put one of her fingers inside the woman’s private part and check to see what’s wrong with the womb. After checking the womb, some herbs are administered to assist in womb setting,” he expalined.

Okoro added that the shortest period they had treated a client before conception was a month and two weeks. “We normally tell people to give themselves three months for the procedure to work. However, for some persons, it may take a shorter time,” he said, adding that clients come once or three times a week for check-up and to make sure the process is working out well.

He further said that over the years, the procedure has proved to be effective as they receive a good number of clients on a daily basis.

“Over the years, we have had a lot of success stories. No one has come here looking for conception and did not find it. If I were to count, I would say that over 100 women got pregnant through this process,” he added. He also said that on a monthly basis he received at least 50 women looking for conception.

According to him, they have not recorded complications. He, however, recalled that there was a period “Mama was sick and a lot of people who put their trust in her were somewhat scared that the procedure won’t go through. But everything still went well.”

He also said that being a man in the practice is a challenge, saying, “As a young guy it can be really difficult. Women often tell me that I am too young to attend to them and they cannot expose their bodies to me.”

Roselyn Nwoke, one of Okoro’s clients, was full of praises for the womb setting procedure.  She said she suffered miscarriage in 2018 and was told by health experts that she won’t be able to conceive again.

“I remember visiting the best fertility clinics in Lagos and it was always different stories from different doctors. At one hospital I had spent close to N300,000, still nothing worked. Before meeting Mama Ijaw, I was already considering IUI and IVF,” she narrated.

Mrs Nwoke said a friend referred her to Okoro and his mother, but at first she was a bit sceptical about the whole procedure. “I came from Delta, where the practice is quite familiar. I remember asking myself if it would work, considering how much I had already spent on private treatments,” she said.

She, however, said the process was easy and smooth, adding, “After Mama is done setting the womb from under and massaging it, the herbs, which have been mixed with liquor, will be placed on the stomach, close to the womb; and you are to carry it like that the whole day.”

She told Daily Trust Saturday that less than two weeks after starting the process, she found out that she was pregnant.

“I will recommend this to anyone looking for conception. I tried it and it worked well. I have also heard testimonies from other people who visited the home. Also, the whole procedure doesn’t cost up to N50,000,” she said.

A health expert Fatima Damagum,who spoke to Daily Trust Saturday, however, mentioned that, “In medical practice, the closest thing we have to womb setting is when a baby is breech and the stomach has to be massaged for the baby to sit in the right position.”

Dr Fatima states that she will not encourage people to go through the procedure as it has not been medically and clinically tested and proven to be effective.