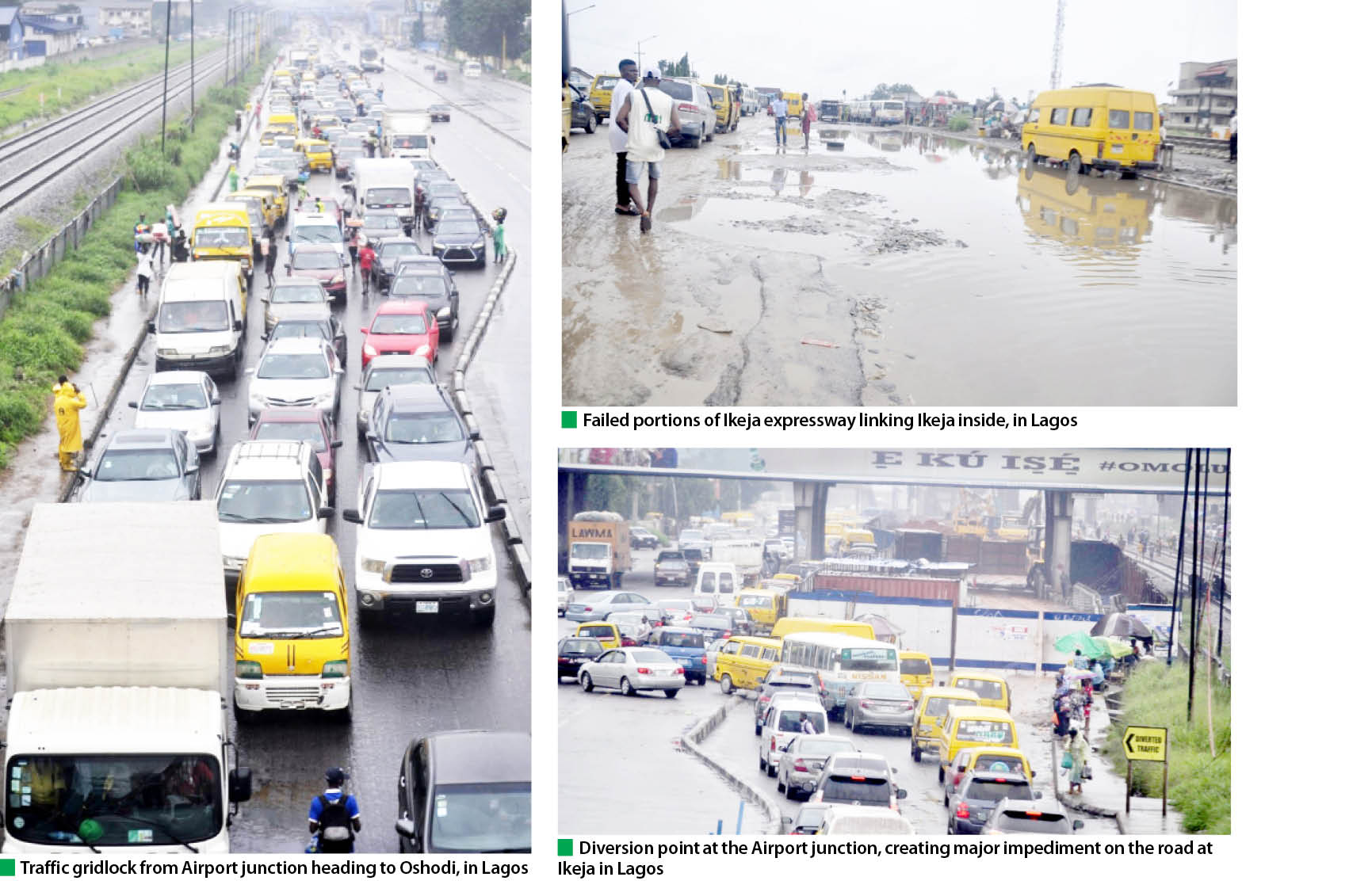 It takes guts to ply the Agege Motor Road in Lagos as traffic robbers and pickpockets have taken advantage of the deplorable portion at the Ikeja Along to unleash terror on commuters. Daily Trust on Sunday having visited the road reports the plight of the commuters and why the government despite promises has failed to fix the road for over one year.

Motorists and commuters plying the popular Agege motor road in Lagos have decried the deplorable condition of the road.

Their plight is worsened by a portion of the road at Ikeja Along which has caved in for over a year now, making passage through the route nearly impossible.

The situation is made worse by the ongoing construction of a bypass from Computer Village to the main expressway.

Commuters on this road have also lamented that the road has become a safe haven for criminals and kidnappers who have converted the failed portion of road between Ikeja Along bus stop and Ile Zik to their operational base.

Traffic robbers and pocket pickers now snatch phones and other valuables during the early morning and evening rush.

Most items snatched from victims are easily sold at the popular Computer Village by street urchins who disguise as traders.

Many persons, including traders, have been injured by the criminals who hang around the dark corners pretending to be passengers waiting to board commercial buses.

The road, which ought to serve as the fastest route from Lagos to Abeokuta, in Ogun State; has remained in a deplorable condition for years, since the construction of a standard gauge rail line linking both states started.

The present condition of the roads shows that it needs to be repaired urgently to avoid any disaster.

The failed portion of the road became worse following the recent rainfall at the ever-busy Ikeja Along bus stop.

Our correspondent who visited the place on Monday discovered that the failed portion of the road has been causing serious traffic jams on the road.

Some commuters who spoke to our correspondent described the man-hour lost daily as disturbing, in a state that prides itself as the fastest growing economy in Africa.

Alade Jegede, who plies the road every day to and from work, said the state government’s ban on commercial activities had also added to the plight of Lagosians, who he said are now being exploited by shylock commercial bus drivers.

“The transport fare from Egbeda to Oshodi which used to be N200 is now N400 and the return journey from Oshodi is N500.

“Those who cannot afford to pay the exorbitant fare trek from Oshodi to Ladipo or PWD to reduce the amount they would pay.

“Aside the fare, one gets stuck in traffic for hours for a journey that is less than 20 minutes. The annoying aspect is that nobody seems to want to take responsibility for the repair work,” he said.

James Okwudili, who owns a shop at Ladipo auto market, argued that there is no government in Nigeria.

Pointing at the bad spot in the middle of the road, he demanded to know how much it will cost those in government to fix the road.

“To fix this small portion is now a problem. We are appealing to both the state and the federal governments to come to our aid in this regard,” he said.

He said it is both embarrassing and unfortunate that the road was left to deteriorate to that level, stating that if something urgent is not done, it would be worse than the Mile 2-Badagry expressway.

A commercial bus driver, Makinde, said that those in government have left their major duty for the 2023 elections.

According to him, nothing is now important to them like the electioneering campaign period.

“Others are waiting to award it as a fresh contract. I assure you that this road will not be fixed until after the election,” he said.

Makinde, who also plies the road regularly, said: “The government says it wants to fight insecurity and when you have a road that is as bad as this one, how would you fight insecurity?

“When you stay at one point for a long time due to the bad road, hoodlums take the advantage to attack commuters,” he added.

Not minding the hardship inflicted on people, officials of the Lagos State Traffic Management Agency (LASEMA) and policemen on traffic duty allegedly demand for money brazenly from commercial bus drivers, while officials of the state taskforce parade themselves as lords of the manor.

He added: “Ikeja Local Government Area, which ought to provide some interventions by filling the bad portions with laterite, sit and watch while commuters suffer right in front of the local government secretariat.”

On his part, Suleiman Oladije, is worried about the danger that lurks around due to the craters on the road.

“Are they waiting to see when a truck will fall on occupants of smaller vehicles before they will do something,” he asked. He advised commuters to exercise caution and patience on the road, adding that safety should be the watchword.

Our correspondent learnt that some regular commuters have started using Oba Akran, through Guinness Road as a bypass to avoid getting trapped in the mad gridlock.

The Commissioner for Information and Strategy, Mr. Gbenga Omotoso, affirmed that a lot of construction works are ongoing because of the red rail line along the axis.

The Lagos Rail Mass Transit (LRMT) Red Line project, which is being developed by the Lagos Metropolitan Area Transport Authority (LAMATA) has the capacity to transport 500,000 passengers daily.

The Red Line would traverse on standard gauge from Agbado to Oyingbo, in the first phase, while terminating at Iddo in the second phase. It has eight stations.

Omotoso thereby noted that the pains that Lagosians are going through is not permanent but temporary as the project would be completed by December.

“By the time we commission the red rail line by December, all the pains and sufferings will be over,” he assured.

Governor Babajide Sanwo-Olu had earlier during a tour/inspection in August assured that the project will be completed before the end of 2022 while it is expected to commence operations in the first quarter of 2023.

On the activities of hoodlums at bad portions of the road at Ikeja Along to Ile Zik, he assured that the state government will get in touch with the police, to deploy its men to the axis.